Strip Em All: the game that uses psychology to solve puzzles

A game about psychology

Share All sharing options for: Strip Em All: the game that uses psychology to solve puzzles

Athletic Design's Strip Em All is a comic-based puzzle game that tasks players with solving puzzles using their understanding of people and psychology, according to developer Ola Hansson.

Hansson describes the game as a "psychological point-and-click adventure" where players rearrange the panels of a comic strip to illustrate a situation that reflect's the comic's title. He told Polygon that his goal is to make a game that is completely non-spatial, and uses psychology rather than logic to solve puzzles.

"This spurred me to make a game which is all about humans and not at all about spatiality."

In one level Polygon played titled "The Narcissist," we were given six panels that were out of order, with some panels having alternate variations that we could toggle between. Using our understanding of what a narcissist is, we had to rearrange the panels so that the comic strip would tell a story about a person with narcissistic tendencies. The challenge was there were two possible outcomes — both telling logical stories, but only one telling a story about a narcissist. So rather than base the solution on logic alone, the puzzle required us to understand the kind of behaviors and thinking and narcissist would exhibit. 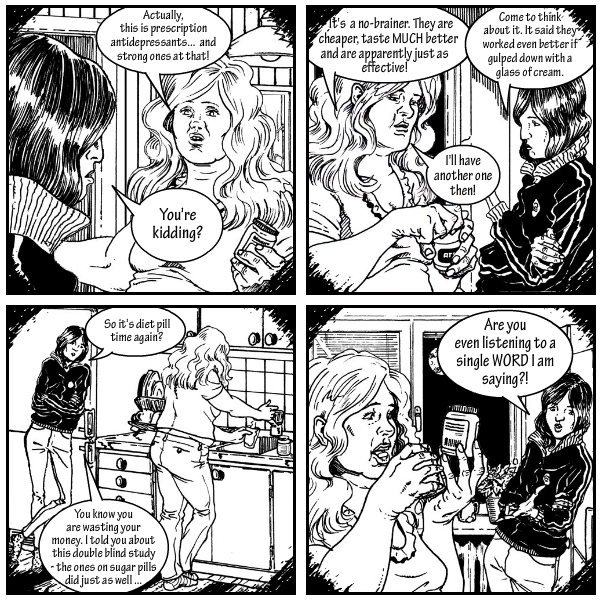 In another comic titled "The Self-destructive," the player can toggle between panels to create five coherent comics, but only one reflects the title. Hansson said that in some strips, the additional comics are red herrings, designed to stress to players that the game isn't just about making coherent comics — it's about thinking about the characters and how they are portrayed. In other strips, the additional comics are not red herrings, and instead help the player understand the final strip they arrive at.

"I decided to use psychological 'types' and personalities as the theme of the game, as this would force the player to ponder not only generally about cause and effect, but more specifically contemplate how the effects will depend on the different personalities of the characters," Hansson said. "Ideally, I want players to reflect about the characters' personalities — to figure them out — but at the same time be surprised and laugh when the correct comic and 'punchline' is revealed."

Hansson told Polygon that he wants to bring together the best of comics and video games in Strip Em All by making something that's both fun to play that also deals with more than just the primal emotions elicited by many video games.

Strip Em All can be played for free in web browsers here. It is still being iterated on by Athletic Design.