Evo 2013 is the tournament's biggest, but organizers say they focus on community, not growth

Share All sharing options for: Evo 2013 is the tournament's biggest, but organizers say they focus on community, not growth

The annual fighting game tournament, Evo, kicked off today in Las Vegas, Nev. The three-day tournament will bring many of the world's best video game fighters — and the little-known up-and-comers — into a shared space, letting the world watch them battle from afar.

This year's Evo fighting game championship will be its biggest, says founder and organizer Tom Cannon. The event will host nine officially featured fighting games, many more unofficial side tournaments and thousands of competitors and spectators, filling more than 90,000 square feet at Bally's Las Vegas Hotel and Casino.

"It keeps getting bigger and bigger," Cannon said in an interview with Polygon, "which is really gratifying."

Evo has 2009 fighting game Street Fighter 4 to thank for a good portion of that growth, Cannon says, which caused the fighting game tournament to explode in popularity. The annual competition has been growing in size and stature ever since.

"As players learn more about the games, matches just get more and more interesting."

"Starting last year, we grew to the point where we were exceeding the capacity of the biggest ballrooms in Las Vegas," Cannon said. "That's why we started to have to charge for seating on Sunday, when everyone wants to come in and watch the finals. We had to have some way of determining who's going to get in and who's going to be left outside."

This year's lineup of officially featured games is one of Evo's largest. Returning from 2012 are five games: Super Street Fighter 4: Arcade Edition, Ultimate Marvel vs. Capcom 3, Mortal Kombat, Street Fighter X Tekken and The King of Fighters 13. Four more titles, Injustice: Gods Among Us, Persona 4 Arena, Tekken Tag Tournament 2 and Super Smash Bros. Melee round out the list, injecting some new blood into the ever-changing lineup.

Some of those titles, like the latest revision of Capcom's Street Fighter 4 and NetherRealm's Mortal Kombat, have been heavily represented at Evo for a few years. Cannon sees those repeat appearances as a positive thing for the tournament.

"For competitive gamers, if a game is good, it doesn't matter how old it is," he said. As players learn more about the games, matches just get more and more interesting. Some titles stick and when they do, they stick for years and years."

That's reflected in some of the side events that happen at Evo — the less-publicized, informal, attendee-managed competitions.

"There are a lot, maybe four or five side tournaments for Super Street Fighter 2 Turbo going on [at Evo], put on by the fans," Cannon explains. "That's a 20-year old game and those tournaments will have hundreds of people in them. We just give them TVs and a corner and say, 'Go do it.'

"There are Japanese players coming in just for that — people who played Turbo in the arcades and just never stopped."

The initial explosion of the fighting game revival, for which Capcom's Street Fighter 4 was an important catalyst, seems to have slowed since last year's tournament. The tournament's newest official game, Injustice: Gods Among Us, was released in April. The DC universe fighter found its way into the tournament at the last minute after publisher Warner Bros. offered to help Evo's organizers with the logistical issues of adding a ninth game to the already-full lineup.

"Whether or not Capcom or Namco puts out new games, as long as we have strong games, then we'll keep doing this."

"Publishers have started to take notice," Cannon said. "WB was involved in getting Injustice added to the roster. We are generally conservative when adding new games, because we want to make sure it's tournament worthy. We like to wait and see how a game is accepted before adding it to Evo. But the Injustice response was super positive right out of the gate, players really loved it.

"It's always nice to have a new game, but if you have too many new titles then it's almost, like, what's the point?" Cannon said. "You develop mastery over a title and then the rules suddenly change every 18 months? That's almost anti-competitive. Whether or not Capcom or Namco puts out new games, as long as we have strong games, and the games we have are really great, then we'll keep doing this."

"It probably does mean we won't have much growth or things might plateau, but that's perfectly fine with us."

Cannon says Evo's organizers have never focused on growth. Instead, he says, the competition has been more about establishing respect and bringing players from around the globe together to compete. "We also want to bring something for the players who like to compete, but realize that they don't have a chance of winning," he said. "In that regard, we want to be a big celebration of competition and getting together and having fun with friends." 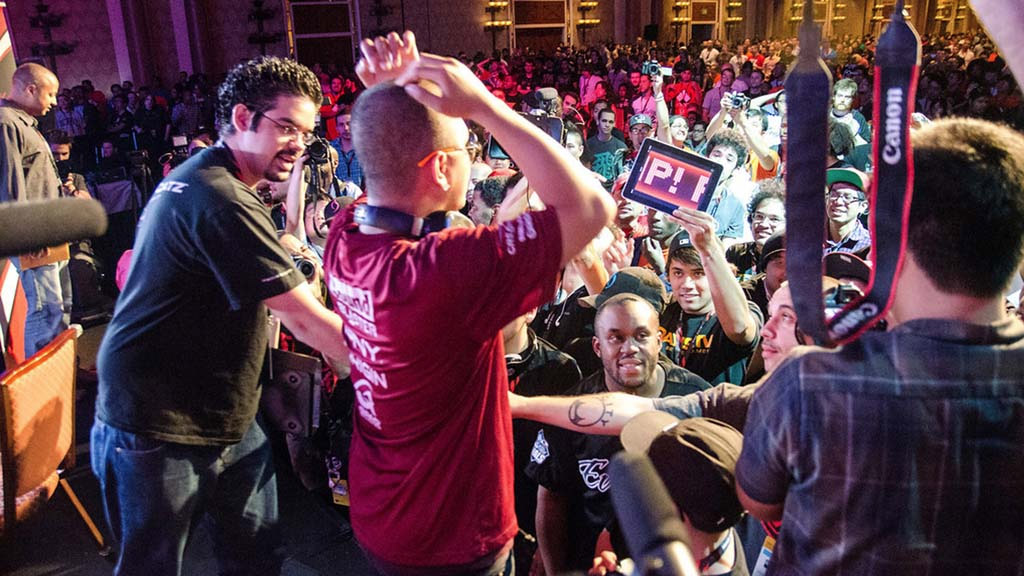 Longtime Evo attendee and fighting game evangelist — and commentator for Evo's most famous fight, a 2004 match up between Justin Wong and Daigo Umehara in Street Fighter 3: Third Strike — Seth Killian agrees that an emphasis on competition and bringing the community together is what sets the tournament apart.

"My favorite thing about Evo is what hasn't changed," Killian says. "It's grown enormously, but it's still a community-powered event, run entirely by people from the player community coming together. It's still a gathering of friends and passionate gamers, but together they add up to the the most brutal competition you'll find anywhere — it's open for anyone to take their shot, but you'll have to battle against thousands of the very best from around the world to get to the top."

"There are heroes and villains, national rivalries and fan favorites, but everyone respects the work and passion on display from the competitors, and a great match always draws the loudest cheers no matter who is playing. Evo has always worked to ensure the tournament itself is the star, so the things that have changed have been cool additions outside the core competition."

Killian, along with Cannon and Capy Games president Nathan Vella, have helped Evo grow over the past year with the addition of an indie game showcase. Indie developers bring their titles — some of which are as viciously competitive and cutthroat as the one-on-one brawlers — to the show, giving fighting game enthusiasts the opportunity to battle each other in games outside the traditional fighting game genre.

Cannon says the sheer numbers of Evo's growth, measured in attendees and livestream viewers, are only part of the picture. The "hype metric," or how much anticipation there was before the tournament, is equally important. He counts the quality of the matches and the international representation as other important, but less obvious benchmarks.

During last year's Super Street Fighter 4 finals, Cannon says, players from six different countries were represented. "Even that's one of the softest metrics, that's one of the most important ones for us," he says. "That's the watermark; that's why we do Evo in the first place."

"It's open for anyone to take their shot, but you'll have to battle against thousands of the very best from around the world to get to the top."

Killian says it's the stories that come out of Evo that are important, and though few will ever match the impact of Umehara versus Wong in 2004, every year has its share of electrifying battles.

"There are so many good narratives every year that it's hard to choose," Killian said. "My favorite, every year, is 'The Guy Nobody has Ever Heard of Before.' To me, it's like Clint Eastwood as 'the Man with No Name' from the Sergio Leone westerns — amidst the returning superstars, you always have a few amazing unknowns every year. That's just so cool to me — the idea of these secret masters honing their skills in relative obscurity, who find their way to the main stage and start dropping bodies against the best of the best.

"There are also rumors about a legendary Super Smash Bros Melee player (Armada) coming out of retirement for Evo, and I love 'return of the King' stories too, so I'll be excited to see what he can do," Killian said.

The very nature of Evo's open registration helps make stories like those possible.

"We've always tried to keep it as accessible as possible by keeping it an open tournament," said Cannon. "We don't have qualifiers. Anyone in the world can show up and play."

The Evo fighting game championship runs through Sunday, July 14. Official matches are being streamed live through Evo's three Twitch channels (srkevo1, srkevo2, srkevo3) for free. Viewers who pay for an HD livestream of the event will see their payment support a scholarship for students at NYU's Game Center.

For more, an excellent guide to watching Evo streams, both official and otherwise, is available at Shoryuken.