Dark is draining, but that's where its similarity to its subject matter ends.

Dark is a game about vampires, but it's anything but a chic, sexy bloodsucker. It's not graceful. It's not powerful or imposing or terrifying. Developer Realmforge Studios has created a stylish, distinctive cel-shaded look for Dark, but the lazy plot, horrendous AI and incompetent level design fail to provide a remotely worthwhile experience.

Dark is supposed to put you in the shoes of a powerful vampire, but it left me feeling more like an emptied victim's shell.

Dark's hackneyed plot follows Eric Bane, a hoodie-wearing amnesiac who wakes up in a nightclub to discover that he has been turned into a vampire. The nightclub's owners and employees? They just happen to be vampires as well, and they helpfully inform Eric that he has until morning to track down the vampire who turned him and drink their blood or risk becoming a ghoul — the vampiric equivalent of a mindless zombie.

This introduction might otherwise be serviceable, but Dark's amateurish voice acting makes it unbearable. The few characters free of thick, out-of-place accents are still stuck reading awkward, stilted lines. Cutscenes jump between camera angles at a frantic pace, and any remaining potential for drama disappears in a flurry of exaggerated animations that endlessly repeat while characters talk. Dark takes itself so seriously that it can't even ironically get away with dialogue and presentation as laughable as this.

The sole defense of Dark's story is that it doesn't matter much. The meager plot serves as only the tiniest motivation to move Eric from location to location. These spaces act as hunting grounds for various crazed denizens of the night — and it's within these individual levels that things really take a turn for the worse. 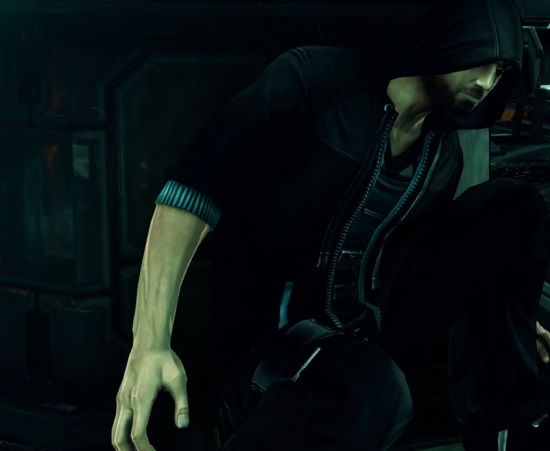 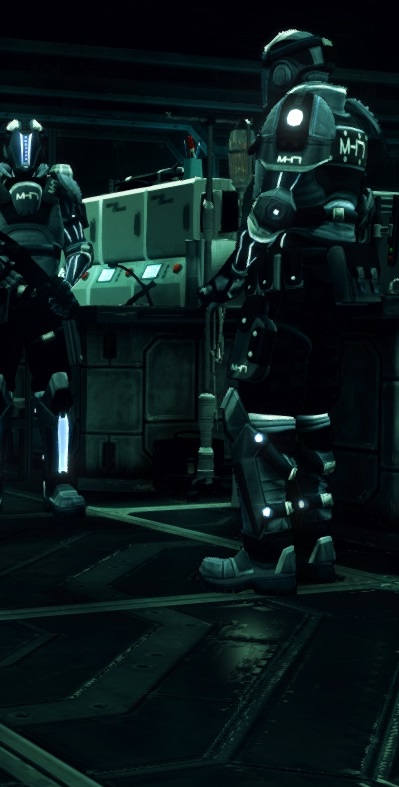 Dark is not a tightly designed game

Although Eric is told over and over that he's far more powerful than the average bloodsucker, Dark is a stealth game. Levels take place across a museum, a strip club, a generic office building and more. They've all got one thing in common: They're crawling with gun-toting guards who down Eric in an instant if they spot him. His only chance at survival is crawling behind cover and using a wide set of vampire powers, such as obscuring an enemy's vision or choking them from across the room. Here's the poorly balanced catch: Your vampire powers are initially limited to two uses in a level and max out at four. The only way to refill them is to suck a guard's blood, which creates noise that will make other nearby guards come investigate.

In a tightly designed game, each room would play out like a puzzle, requiring you to watch guards' patrol patterns and work out the perfect order of takedowns with stops to refill blood in conveniently enclosed locales.

Dark is not a tightly designed game. 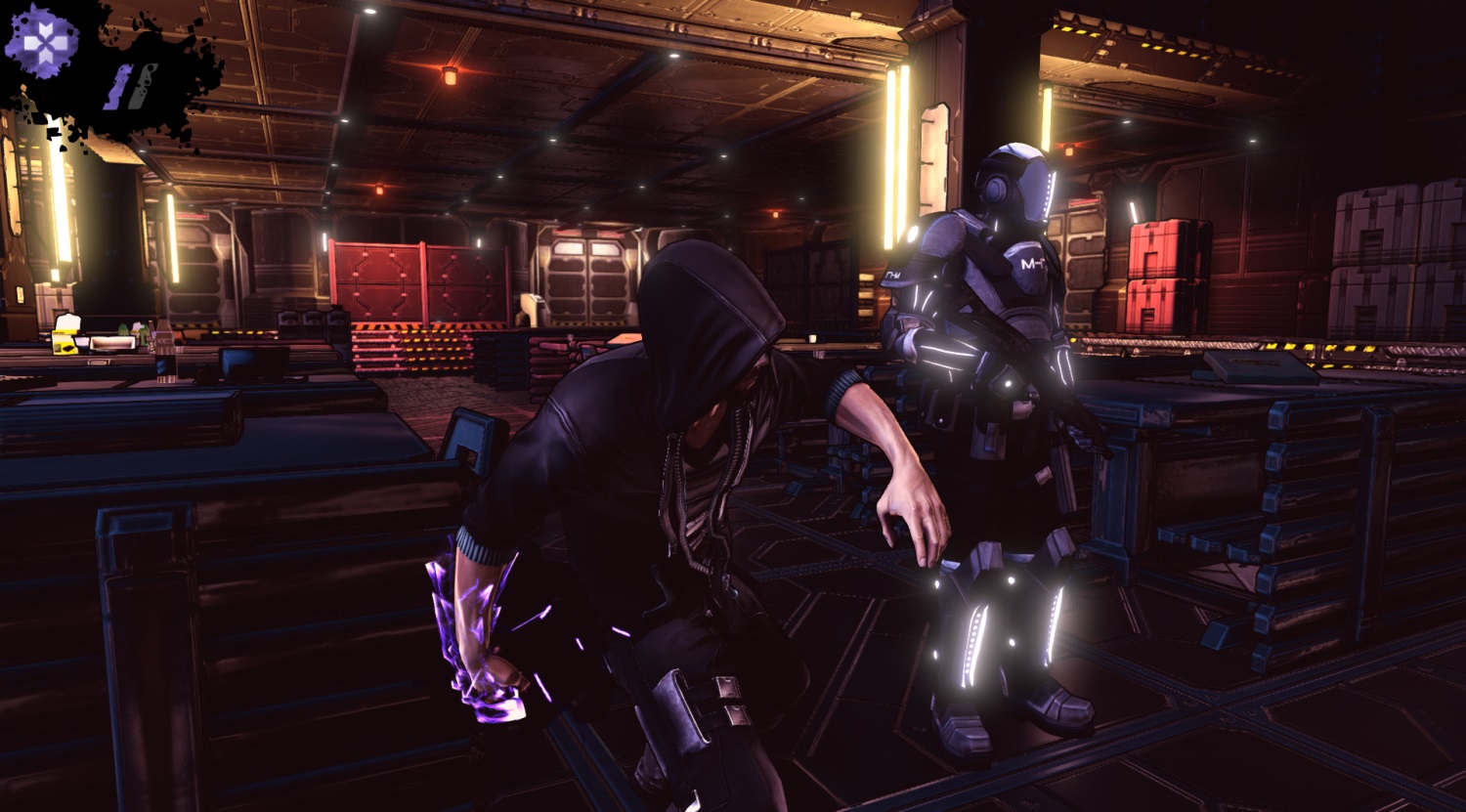 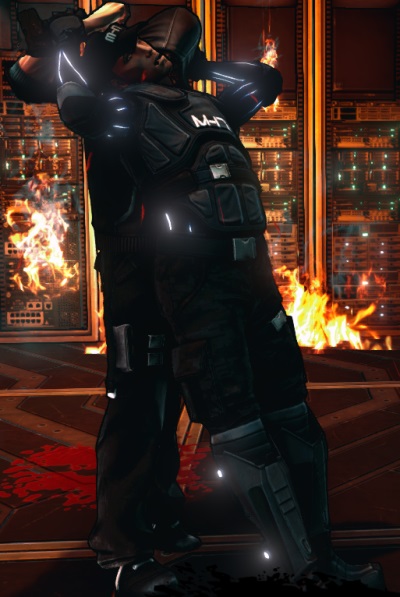 Levels are a mess, often filled with an incomprehensible number of guards; it's hard enough to avoid detection when rushing between pieces of cover, much less when slowly, loudly sucking someone's blood. Even if I had managed to get a handle on keeping my powers up, the AI is wildly inconsistent and impossible to plan for. Sometimes a guard stared at a wall, not noticing as I walked past them a foot away; other times he inexplicably spotted me from across a room, auto-alerting every other guard in the area to my presence.

There's an inkling of a good idea in the breadth and depth of Dark's vampire powers. Each enemy knocked out and objective completed earns experience points, in turn unlocking "power points," that can be spent upgrading your abilities. The upgrades are meaningful on paper — lowering the amount of noise you make, disposing of enemy bodies, etc. — but the blood needed to use them is such a pain to acquire that I never felt comfortable experimenting, and thus never learned to use each power to its full potential.

More often than not I spent my power points on boring but dependable passive upgrades — extra health, quieter movement and faster regeneration, to name a few. As Dark's arenas became more packed with stronger enemies, I depended on those small improvements to reasonably pull through. The boring slog of the first few levels gave way to a frustrating struggle for ground in the last few. And it's a struggle I was stuck repeating a lot on all but the easiest of difficulty settings.

As best I could determine, Dark's normal and hard difficulty settings do not affect enemy AI, the amount of damage they inflict, the amount of health Eric has or any other obvious factors. The sole clear change is a save game restriction. On normal difficulty, you're only allowed to save your game twice between checkpoints, and only once on hard. But "between checkpoints" can last upward of 20 minutes or longer. A single screw-up near the end of a tense section can become a serious setback — an issue that, again, maybe would provide a fair challenge in a much better game but only proved aggravating here. The easy difficulty allows you to save as many times as you want; by halfway through the game, I made that switch, and I can't imagine having dragged myself through it otherwise.

Maybe I would have been better off if I had just quit. The plot never pulled me in or even resolved itself in a suitable manner. The AI never got any smarter. And Eric never felt like a kick-ass creature of the night with mastery of deadly arcane powers. Dark ends how it began: a flaccid non-event, sputtering out before any potential can be realized.