Share All sharing options for: Why Ubisoft thinks gamers will want always-online games

That's not a coincidence.

The push toward open world gaming, and with it the desire to blend single and multiplayer experiences and perhaps the need to always be online, is driven in part by the company's successes with that open-ended form of gameplay, part by technological advances in upcoming consoles and part by Ubisoft's "editorial department."

Every game made at Ubisoft at some point has a visit with the company's Paris-based editorial department. The department is designed not to mandate direction or control artistic creation, but to help refine works in progress and identify systems that can help highlight the best in a game.

Ubisoft CEO "Yves [Guillemot], Serge [Hascoet], the chief creative officer of the company, will decide whether we need more money, more time or if it's looking good," he said. "The editorial department and Serge is shepherding the creation of these things, and open world is something that he absolutely passionate about.

Gerighty is clear in pointing out that while the editorial department helps shape these experiences, they still leave much of the process and independence to the studios.

"All of the editorial policies looking forward are set by Paris, but it's up to the individual teams to go in their own direction," he said, adding that the idea of creating open, living worlds is becoming not just a Ubisoft direction, but an industry one. "I think you're going to see more and more projects going down that road in the years to come. I think even the console manufacturers are going down that road."

And with the rise of "living worlds" will come a need for persistent online connections, something Gerighty believes will become the technological hallmark of the upcoming generation of consoles.

"When the 360 and PS3 came out, I still had a cathode ray tube TV at home," he said. "I upgraded to an HD TV for that generation. This generation for me is always going to be about this seamless online and what better way to make that live than open world games.

"It's one of those things where the online aspect, the seamless aspect, the living, breathing world aspect, that is provided by the online adds so much to the experience that it's a shame to be able to say, 'OK, you can play the game, but you can't have that part of it.' It's a really key part of it, much like World of Warcraft. I genuinely think the open world game without the seamless aspect to it is going to feel a little artificial, a little forced in a few years time. Today it can still work."

Far Cry 3 is the example that everyone kept coming back to as I spoke with developers of Ubisoft's upcoming games at a recent event in New York. Far Cry 3 proved the value of open world gaming. That game showed that gamer's embrace the idea and that developers can work within its constraints to create remarkably varied experiences.

Gerighty points to Far Cry 3 as an example of not just open worlds, but the potential of peppering other players into a game.

"Imagine [Far Cry 3] now with people populating that too and not just a simulation, an artificial simulation working around you, but something that's more natural and humanistic," he said.

While The Crew uses AI to control the routine of a city's pedestrians and vehicle movement, that's really just a sort of moving backdrop for the game. The challenge, the adversaries and friends of this experience are made up entirely of other players.

The game features the entire continental United States recreated in the sort of broad strokes that detail only major cities and restructure some of the interior to tweak gameplay. This entire expanse of roads, cities and vehicles is then packed in with real players, all tracked in real-time.

"That's where you're going to get the most surprising living world around you," he said. "The aim is to have all of the adventure of driving, all of these adventures you could possibly have from street racing in New York to a smugglers run in Nevada. What does [always online] bring? It brings something that's alive and extremely varied."

That persistency also brings with it the potential to forego the need for new games and just continue to build on top of the experience, perpetually building out the country, while allowing other players to provide the action, he said. 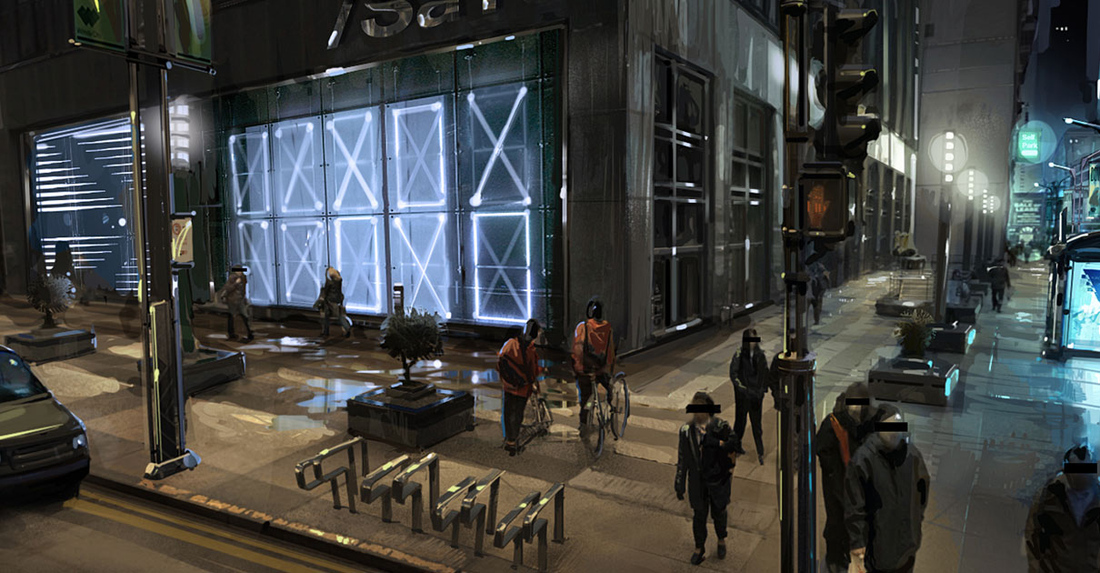 While Ubisoft's use of open worlds in their upcoming games is becoming increasingly obvious, the way those games try to integrate other players experiences isn't always.

Take for example Watch Dogs, a game that has players taking on an Orwellian government with the help of its over use of smart cities and an innate ability to seemingly hack everything.

The game uses an open world experience, one in which you can spy on just about anyone you run into, that serves as a rich backdrop for what appears to be a linear narrative. But the developers added a twist: other players.

"We've been working on the game for about four and a half years, but from the very beginning we knew the game would be about hacking," he said. "Our first prototypes, our first demos were really about trying to create an experience where players would be hacking each other. We tried to weave that right into the gameplay from the beginning. We figured if that gameplay loop would be fun, we'd have something to base our game on."

And pushing that hacking experience into an open world was a perfect fit for the game, Graham said, it was what the game needed.

"I think moving forward, players are looking for more space to play with, they're looking for more experiences," he said. "They don't just want to play a story, they also want to explore a world. For us building all of Chicago kind of makes sense and it fits in with the type of game Ubisoft wants to build right now.

"You make your own movie when you play a sandbox versus a systemic game." 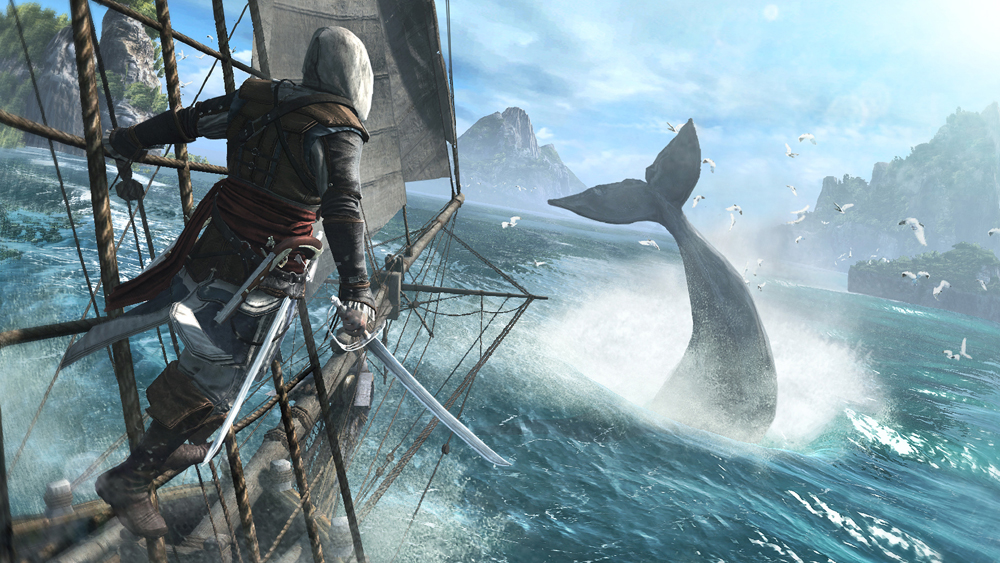 While both Watch Dogs and The Crew show signs of Ubisoft's growing interest in open worlds and persistent connections, it's Black Flag that illustrates perfectly the evolutionary impact on a series that push can have.

Two years ago, the team working on this next Assassins' Creed already knew the sort of world they wanted to build, said Ashraf Ismail, game director for Assassin's Creed 4: Black Flag. They knew how big the game was, they understood its scope. But then they saw Far Cry 3 and what they saw, Ismail said, they loved.

So as Far Cry 3 wrapped up, the team brought in many of those developers to help them on Black Flag.

"We know how to build cities. This is our bread and butter, but to build something that is much more sandboxy, much more systems out in a huge world, was a big stretch for us," Ismail said. "We had to push ourselves. We got help from the Far Cry guys who are now part of our team."

They helped with divergent gameplay, the ability for the game to toss warring factions, like the British and the Spanish, into a sea-tossed ocean amidst sandbars and islands and then drop the player into that experience. The end result is the sort of game that a player can get lost in, Ismail said, but in a good way.

"We love the idea that you want to go to a mission, you start heading there, in Nassau, and then 45 minutes pass and you're nowhere near Nassau in the world," he said. "This is immersion This is being sucked into the game. We want this. We love this."

Because they knew the game was going to ship on current and next-gen consoles, the team also wanted to make sure they pushed the bounds of what an open world could be, he said.

"So having a connected experience is very important, this is something that next-gen consoles are pushing," he said. "We had to make sure it was part of the game, not just an add-on."

Where that experience in The Crew meant peopling the meaningful vehicles of the game with real players, and with Watch Dogs it meant adding the constant threat of other player hackers, for Black Flag it had an entirely different meaning.

In the case of Black Flag, that blurring of lines comes when a player's friend stumbles across an incredibly rare event in the world, like sighting a white whale. That event is automatically communicated to all of a player's friends, who in turn can then seek it out in their own world.

This isn't just identifying what already exists in the world for all players, it's placing it there, Ismail said. This allows players to pepper the best of their own experiences into another player's world without making it their own.

"These are very rare and unique experiences," he said. "If you're playing on your own there's a chance you may find them, but it's very tiny. The more friends you have, the more likely you'll see these experiences.

As with all of these connected, open world experiences, their is an added benefit to the publisher for creating these sorts of games: Perhaps players won't be as willing to get rid of their games. Or at least that's the hope.

"We don't want people to ever get rid of our game," Ismail said. "We set out to make a game that you felt always had value for you, that there is always new stuff to find and new stuff to see."

Ultimately, because of what Ubisoft sees as the shifting landscape in game development, because of the inherent benefits of making a game more open world, this new element of play is likely to become a lasting tenet for all future Assassin's Creed games too.

"As a company that develops a lot of open world games, we're always trying to push the boundary and see how we can improve our open world," Ismail said. "So, yes I think you'll see a lot more sandboxiness going forward in the future" for Assassin's Creed.

While the desire to create more open-ended experiences that remain always online might be driven in part by more mercenary desires, like cutting down on used game sales or combating piracy, all the developers I spoke to said that the chief driver was what those elements can add to their creative works.

"It's this combination of freedom and adapting to the way people play a game," The Crew's Gerighty said. "It's the tailored experience for people and the mesh of both is something that's truly going to be remarkable and surprising for people playing games. With it a whole new generation is born.

And Gerighty is convinced that any reluctance players have now about always connected gaming will vanish over time as they become more used to the idea and more open to its benefits.

"This is an issue today, three years down the line it's not going to be an issue, or much less of an issue," he said. "Today it's risk taking, in three year's time it's going to be a standard feature."