TowerFall creator Matt Thorson was not prepared for the response to his game.

"The game had been testing really well since about six months into development, when everything just started clicking," he told Polygon. "I had my close friends in my basement every couple of weeks to party and play TowerFall, and they started really enjoying it and asking when the next time they could play was. When I brought the game to developer meetups, it would draw crowds. Even at Evo... It was just amazing."

Thorson brought TowerFall to the Evo 2013 fighting games tournament last week, where he expected the game to be torn apart by fighting game gurus.

"I was anticipating more hardcore players showing me holes in TowerFall's competitive design, so I could refine them," he said. "But it held up pretty well.

"Players would play a while and then go compete in their matches and come back and play again," he added. "Some would come back four, five times. The game has proved itself, and now all I really want is to get it to PC." 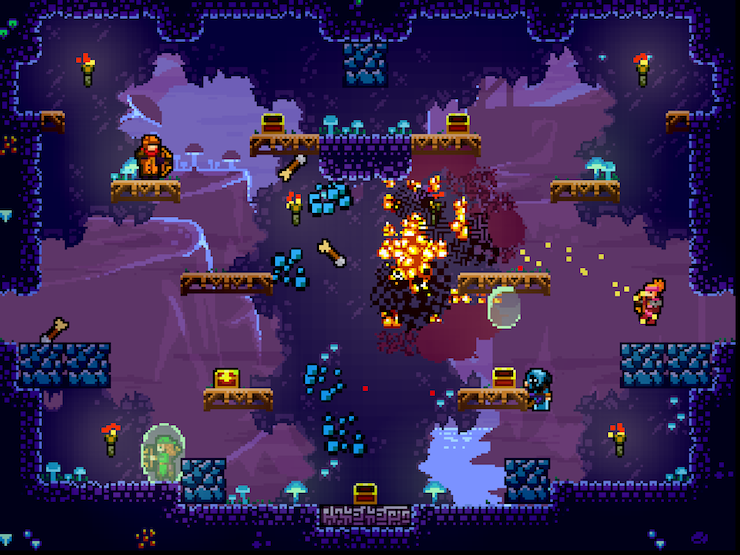 TowerFall came into existence at the Full Indie Game Jam in Vancouver in June 2012. Thorson and his team — which included TowerFall composer Alec Holowka — had 48 hours to build a game on an idea they just couldn't let go of: shooting arrows. It began as a single-player flash game in which players were meant to feel like a skilled archer out of an ancient legend.

"I wanted the player to feel like they were already a master archer, even before they started playing," Thorson explained. "So the arrow mechanics are very simple. Most games with arrow mechanics make you charge your shots, pull back the arrow longer to make it go farther and force you to take your time aiming.

"But in TowerFall there's no charging and it encourages you to shoot quickly, because your targets are moving. These arrows even seek towards targets a bit to give you more leeway with your shots. And then I limited it to 8-way aiming, instead of a precise 360 degrees, to simplify it further. So the player has only a few angle choices, making it easier to make snap decisions."

After the jam, Thorson prototyped a multiplayer version of his game — and it was then that he knew what the game was meant to be.

"It ended up testing a lot better, so [multiplayer] slowly took over the game," he explained. "Multiplayer was also just a lot more fun to work on, and I'd been thinking about multiplayer design for a while and just didn't have an outlet for it." 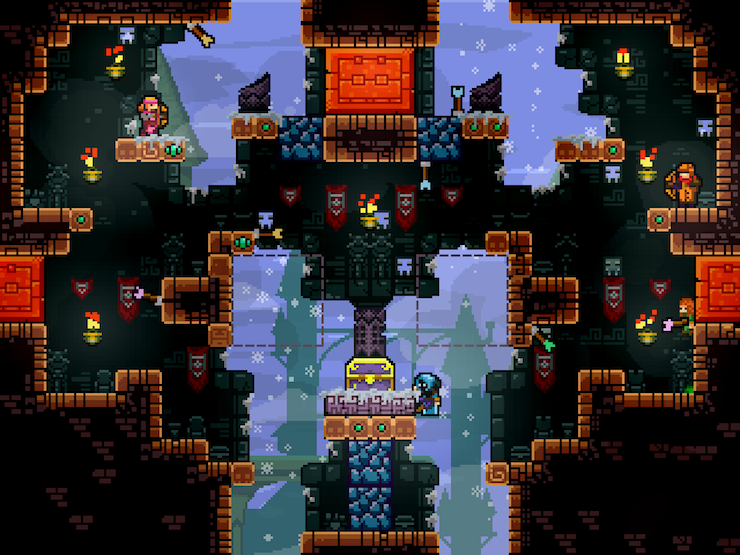 Thorson said that in hindsight, he realized several other competition games influenced TowerFall's mechanics. The arrow catching mechanic is very similar to the item catching one in Super Smash Bros. Melee; shooting arrows reminded Thorson of egg-throwing in Yoshi's Island, only faster; one-hit kills and an atmosphere of heightened tension were drawn from Bushido Blade; and the strong emphasis on battlefield positioning was drawn from Team Fortress 2. The playful way of shooting, he said, he took from another game he felt was just made for goofing around: GoldenEye 64.

"That game felt so playful and goofy to me, even if that's not what the developers intended," he explained. "I wanted TowerFall to not take itself too seriously in that way, with the variants and match end awards.

"Releasing the game has given me a lot of perspective and I feel like I understand it and my inspirations for it much better now," he added. "Which is awesome because it helps me understand where to take it with the updates I want to do."

As for TowerFall's medieval setting, Thorson thought stone-walled castles and lava-filled dungeons were a good companion to the arrow mechanic — and he was also on a Games of Thrones kick at the time.

"I was reading a lot Game of Thrones at the time, there's some influence there," he said. "And that's why the characters are more realistic, they're not wizards or anything like that."

"There are ideas for a single-player campaign that I want to try."

Thorson said each character has their own backstory, something that isn't quite realized in the current version of TowerFall. Each archer has a unique title that hints at their personality and past, but in the future Thorson will add more content that will explore the tumultuous history of these characters.

"Originally I was going to make an instruction manual, like an old-school NES manual, and that would be the only place the lore would be," he said ."But now there are ideas for a single-player campaign that I want to try, so you'll play through a lot of their backstories. You'll see the past of each character."

TowerFall is currently an Ouya-only title for the next six months. The company gave Thorson and his team a financial advance to finish the game, hence the exclusivity window. Launching on a new console, Thorson said, is always a great way to get attention, and he felt TowerFall's emphasis on multiplayer meshed well with Ouya's "couch gaming" philosophy. 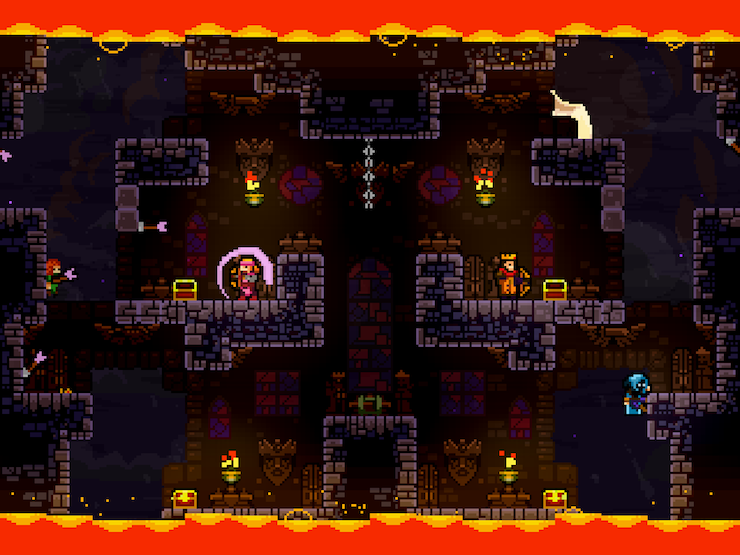 About a month before the Ouya's launch, Thorson realized just how expensive getting his game to players would be: in addition to the $99 console, buyers would have to shell out an additional $50 per extra controller — which added a $150 expense to fully enjoy his title. Since the Ouya supports compatibility with both PlayStation 3 and Xbox 360 controllers, Thorson made it happen for TowerFall.

"That kind of sucks," he said. "I realized I had to support as many controllers as possible, and then that would be a major selling point for the game. It wasn't a whole lot of work either, technically [adding to Android is] not that big of a deal, they're all just USB controllers."

So far TowerFall has sold 2,000 copies, Thorson said. As for the game's $15 price point, Thorson wouldn't sell his game for anything less. The Ouya is still an open space, and an expected pricing model for a console Android game has yet to stabilize. Thorson recently announced the game would be coming to PC in a few months, and he plans to stick with his pricing model.

"I went back and forth on the price for a while," he said. "A lot of stuff on Ouya is priced like a mobile game, because lots are mobile games that were easy to port to Android.

"I personally don't think the Ouya's audience is big enough to support mobile pricing," he added. "All the arguments towards pricing lower were to cater to people's expectations, and I believe TowerFall is worth $15 if you have people to play with. It will be $15 on PC when it comes out, and it felt weird to price it differently just because of the platform.

"On an iPhone, you can charge a dollar and potentially make it back because the audience is gigantic. But there aren't enough Ouyas out there yet."

Thorson's design philosophy for TowerFall has two sides: make an easy-to-learn versus mode with balanced competitive play, and make a good party game that will appeal to both players and spectators. The idea, he explained, is if you play the game for a long stretch of time, you'll gradually get better but will still be challenged. At Evo, Thorson said he learned that he is well on his way, if not at, his goals — but there was still another layer he could add.

"One thing players introduced me to is yomi, a term that originates from Virtua Fighter," Thorson said. "A game with yomi has the potential for extra layers of mind games. You can do something that isn't really an optimal move but still do it anyway because your enemy is expecting you not to do it, and then that makes it an optimal move. You're doing stuff just so they don't expect it.

"I always sort of had that in mind with TowerFall but didn't have a term or word to make it concrete in my mind. And now that I have that word, I understand that yomi is part of TowerFall." 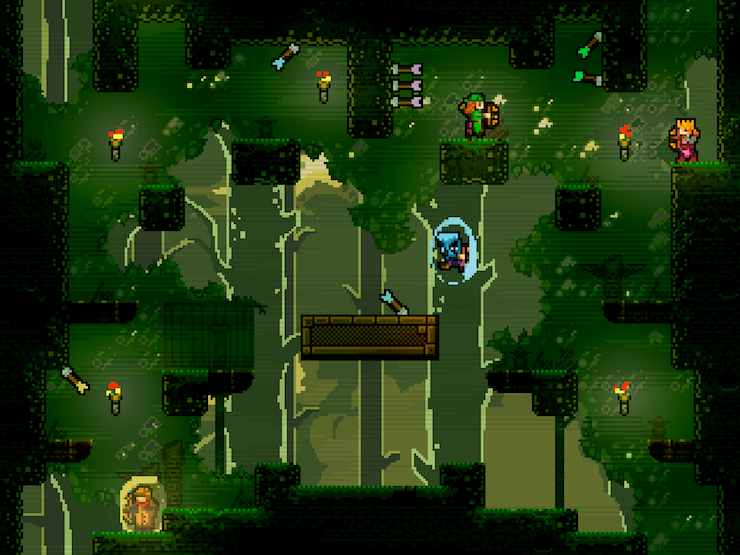 Thorson has already made tweaks to to the game based on his yomi lesson at Evo, which he plans to push in the game's next update. These tweaks include being able to cancel a dodge and fake out other players.

The next update may also include finished versions of Thorson's other current programming endeavors: two new levels for versus mode and a handful of balance changes. He plans to wait for a later, larger update — possibly the launch of TowerFall on Windows PC — to include the single-play story mode, and he's been toying around with a level editor, new power-ups and arrow types, and a fifth archer character. Eventually he wants to add support for up to six controllers and implement three-on-three team fights, which will likely come first to the PC version.

TowerFall's prime time on Ouya is up at the end of December. So what then? The game is already coming to PC, but there are other platforms to think of.

"Everyone has approached me," Thorson said. "At E3, Nintendo talked to me. Sony came to my house. Microsoft has been emailing me. There's a lot of demand for the game. I just want as many people to play it as possible.

"I didn't expect this. It's really encouraging."