Cloud's "SOLDIER 1st Class" uniform and his iconic Buster Sword will be unlocked for Lightning's use when the game launches early next year. The DLC pack also includes the Soldier's Band boosting item, as well as Cloud's battle-finishing animation and the Final Fantasy 7 victory fanfare, which will be triggered when Lightning successfully wins a battle.

In Lightning Returns, each of Lightning's outfits grants her a unique set of abilities. Square Enix will share more information on the special abilities attached to Cloud's costume at a later date.

Lightning Returns: Final Fantasy 13 will launch in North America on Feb. 11, 2014 for PlayStation 3 and Xbox 360. Check out the video above for a look at Lightning in action wearing her predecessor's outfit. 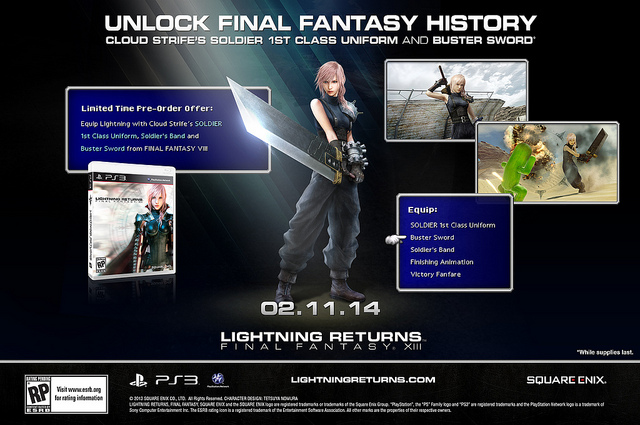