The biggest annoyance for the creators of Borderlands 2 was the lack of personality in the playable characters, writer Anthony Burch and creative director Paul Hellquist told Polygon at PAX Australia.

When asked about what he would change in Borderlands 2, Burch replied that he would "probably add more personality to the player characters."

"That was a big one," agreed Hellquist, who previously told Polygon that working on Borderlands 2 allowed him to fix what annoyed him about the original Borderlands.

"We didn't know that anybody wanted personality in the characters until super late and we really didn't have enough time to react fully," Burch said. "I hate it when characters talk in games. I like my Gordon Freemans. So I just wrote them that way and I was like, 'HAHA I'm so clever, it's less work and it's better!' And it turns out they really wanted to know why all of these characters are all on Pandora."

"People really seem to want to know who their characters are."

It became especially apparent that players were interested in players personalities and stories was when Gearbox released the Kreig the Psycho video and it received a positive reaction from the game's fanbase.

"People really seem to want to know who their characters are and actively participate in the story rather than just these faceless entities," Burch said.

At the last minute of the game's development Gearbox then tried to add "half decently implemented things," according to Burch, such as an item in the inventory to tell the player why the character is on the planet.

Burch said he would love to explore characters' backgrounds from a story telling standpoint and have the game be more aware of which character they have chosen. 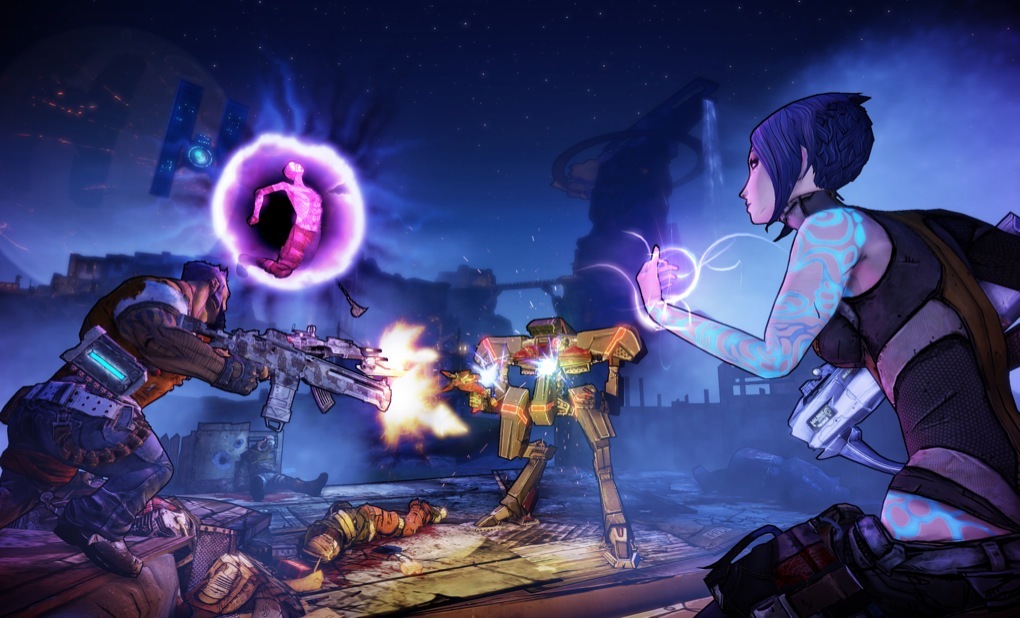 "Like when you meet Lilith as Maya — Maya's whole backstory is allegedly looking for a Siren — but when she meets Lilith, she is like 'Oh hey, what's up?' and nothing is different. She should be, 'Holy shit! I can't believe it!" Hellquist said. Burch gave another example of where the character of Roland meeting Maya would be very different from Lilth's reaction.

"And we can get a lot more characterization of the main characters by having the game be more aware of who you are and who is interacting with the NPCs," Burch said. "That would be very exciting to explore."

Burch explained that they almost did go down one path in adding more depth to the characters, a "Left 4 Dead style" of conversation that would trigger when the player was idle.

"We have pages and pages of dialogue between the vault hunters," Burch said. "The idea being that if you left your controller idle for a while, the game will check if there was other vault hunters around you, and a conversation would just happen.

"And in terms of the amount of dialogue, because I went overboard and was overly productive, 'I'm just doing to write stupid dialogue,'" he explained. "And I wrote too much, like production-wise scary. It is still sitting around somewhere."

"It was a dumb idea but I think basic principle is still sound," Burch said.

"I think something a little more serious would be exciting to explore again."

Hellquist previously pointed out the contrast between BioShock — which consisted of a dark subject matter, of horror and "psychological stuff" — and Borderlands' "woohoo!' It's sort of like crazy town." We asked the duo if they would like to shift gears and work on something darker.

Hellquist explained that prior to Bioshock, he worked on two games that had dark themes, such as one that was about going through the nine circles of hell, like a "Dante's Inferno type thing."

"So I was like super done with dark stuff," Hellquist explained. "And now on Borderlands for the past four years, where wacky ideas are all on, so personally I think that I have had enough time away, I think something a little more serious would be exciting to explore again."

"We get to do do a little bit of that Tiny Tina [DLC] which was cool because we got to explore some of those, not dark, but real ideas and some of these serious topics, but still get to have Claptrap being Gandalf and those sorts of things," he said.

"Borderlands 2 is the first ever story that I have ever worked on," Burch said, who has been working on the title for more than three years. "Yeah, it would be kind of exciting to try something more serious, to see how capable I am of doing it because that would be fun to find out."

"Something serious might be a fun change," he continued. "A lot of my life revolves around comedy and it might be fun to try something a little different."

"Is it feasible that it might be something you might pitch or be on the horizon?" we asked.

"Who knows?" they responded.