At Comic-Con this weekend, Tekken series producer Katsuhiro Harada — with a little help from a room full of Tekken fans — announced a brand-new character for free-to-play fighting game Tekken Revolution. The fan-favorite, known currently as "Female Vampire," was the clear winner, placing first in a Facebook poll and first at Namco Bandai's "The Future of Fighting Games" panel.

The character, one of ten proposed ideas for a brand-new Tekken fighter, is one of about 30 to 40 character concepts that have been pitched but never completed over the years, Harada told Polygon. Some of the character ideas date back to the original Tekken, which turns 20 years old next year.

In an interview with Harada at Comic-Con, he said he expects "Female Vampire" to find her way into Tekken Revolution later this year, perhaps as early as fall. Harada explained that the quick turnaround on the new original fighter can be chalked up to the fact that some character concepts are more fleshed out than others.

"We have a stock of concepts to draw from that people have never seen. Some of the earlier ideas that got discarded, we hadn't really thought about the fighting style, techniques or animations," Harada said through his translator, "but with some that were thought about for sometime, we did go through that process a bit so they will be quicker in implementing." 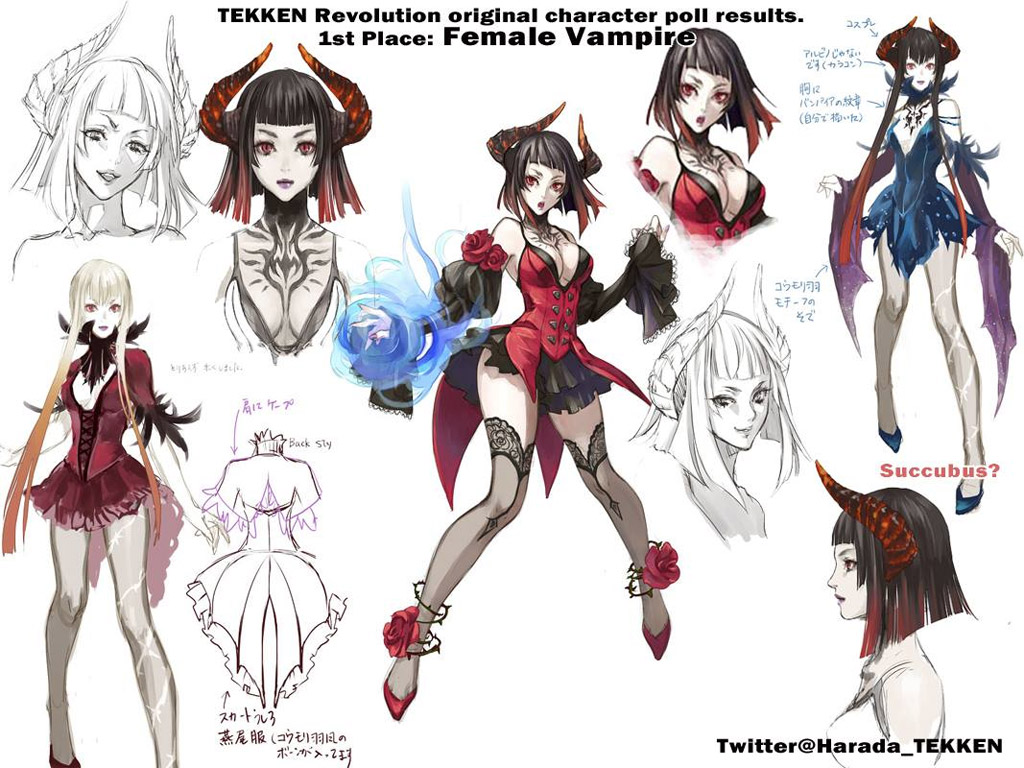 Tekken Revolution's free-to-play nature and its deviation from the core Tekken series has afforded the team opportunities that wouldn't be possible otherwise, Harada explained, like the option to include "off the wall characters" like a fighting fish or zombie bride.

"Because Tekken is a long-running franchise, there are expectations from the players," Harada said. "This is just an example, if there were a Tekken 7, that would be the next real installment and people would expect the canon story to be continued and tie up loose ends. We would have to have all the characters they expect [in that game].

"Throwing in a salmon or alien or something like that might make certain people unhappy. It might not fit into the story. It's been great to be able to try some new things like this."

While Salmon, a giant fish that would flop around and lay eggs as its fighting style, was in little danger of actually making its way into the game, the character's fifth place showing in the poll cause some early concern for Harada.

"It showed promise and we were kind of worried there for a second," Harada said. The developer previously expressed fears that Salmon's implementation would have proven "quite difficult."

The addition of "Female Vampire" is just one of the planned updates to Tekken Revolution, which is due to receive a major update in North America later this month, adding new modes, new characters and new costumes. Tekken Revolution will also add a new practice mode that will allow players to fight without the need to spend coins.

Harada said Tekken Revolution's arcade-style coin-based system system was settled upon after the developer looked at a variety of free-to-play monetization methods.

"We looked at Team Fortress 2 and some of the other free-to-play titles that are popular in North America," Harada said. "I'm a PC gamer and experience some of those firsthand, but it was kind of tough [to settle on], because no one's really done that with a fighting game before. Whether our approach is a good one or not is still hard to tell."

"We are adapting to what people are asking for as we go along," he said. "It's an ongoing process."

"[A PC port] is something we are really interested in."

Given the free-to-play model's success on PC and his self-identification as a PC gamer, I asked Harada if he'd consider bringing Tekken Revolution to the platform.

"That's something we really would love to do actually and it's been brought up several times," he said. "But Tekken is different from a lot of other games recently because they develop on PC and port to PS3. For us, even from the arcade [days], the game is developed from the ground up on PlayStation architecture. To port it to PC is quite intense, resource and time-wise. We don't have a whole lot of time at the moment.

"But it is something we are really interested in."