A black version of the Nintendo 3DS XL handheld could be headed to North American retailers, according to its appearance in a recent commercial and in a Canadian print ad.

As reported by Go Nintendo, an ad apparently from Real Canadian Superstore shows that a black 3DS XL will be available this Friday, July 26, alongside its red and blue counterparts. 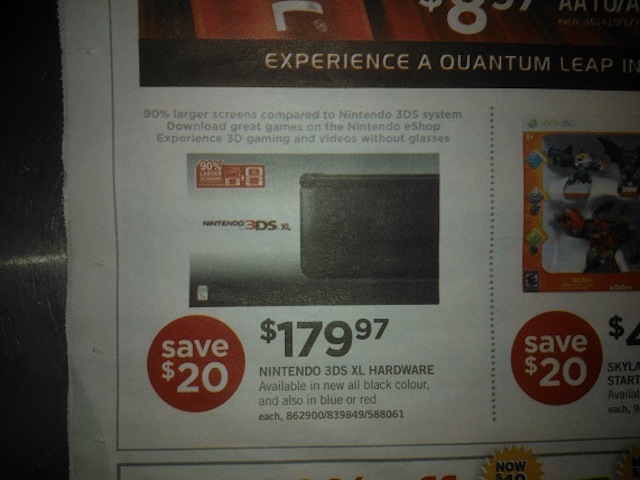 IGN reports that a black 3DS XL also shares some screen time during a commercial for Mario & Luigi: Dream Team currently airing on Cartoon Network. Earlier this year, a yellow Pikachu-themed Nintendo 3DS XL appeared in a commercial for Pokemon Mystery Dungeon: Gates to Infinity before its retail release.

Last month, Nintendo of America's Reggie Fils-Aime said that the comparative lack of color variety in North American handhelds has to do with the way retailers sock the units on shelves. In markets like Japan, which boasts several 3DS and 3DS XL colors, retailers keep them behind the counter, which provides more space for more stock and more variety.

We reached out to Nintendo of America about the black handhelds, and the company told Polygon that "We have nothing to announce at this time."