The Ouya's potential is offset by its rough edges.

The Ouya occupies a strange place between console familiarity and the weird-Wild West of the mobile market.

After a high-profile campaign on Kickstarter and a slight launch delay, the Android-powered Ouya console is finally in select online and brick and mortar retailers. At $99 USD, it doesn't demand much of your wallet to find out exactly what it has to offer — but the appropriately-named Ouya Inc doesn't seem to quite know what that is.

This assumes that your Ouya will be out where anyone can see it. The console is incredibly small in comparison to just about any dedicated gaming hardware we've ever seen, save for the now defunct OnLive dedicated player, and will fit just about anywhere you'd want to stash it. It seems well ventilated, and heat and reliability probably won't be an issue due to the comparatively low-power requirements of the Ouya's processor.

When the Ouya is working as expected, the experience feels well-oiled and quick to navigate. The games we downloaded from the Ouya marketplace were available quickly and generally booted instantly — usually.

The Ouya has a few games from major publishers — such as Square-Enix with Final Fantasy III — but the marketplace is dominated by indie developers who are mainly self-publishing their games. That those developers have an inroad into the more mainstream console market is promising, with games like Towerfall providing polished, fun experiences that would feel at home on the Ouya's competitors just as well.

The system also allows access to the wide spate of Android game releases. While Android doesn't have the depth of content available on iOS, there are plenty of games on the platform that a number of players have never seen. There's a catch though - the Ouya still depends on a controller, which also eliminates a number of Android's highest profile titles. 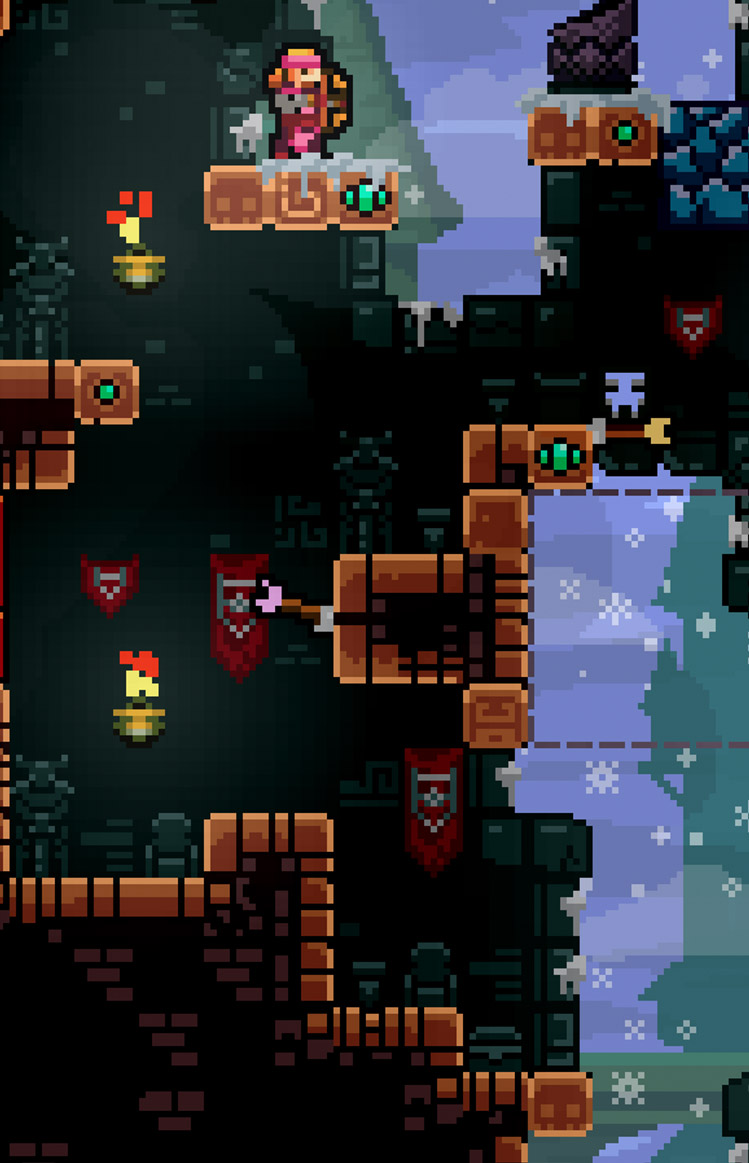 Thus far, Towerfall has proven to be the Ouya's signature title -competitive action game with pixel-art and one hit kills. That's not damning with faint-praise either. Towerfall has hooked our New York office with refined, fun, instantly playable local multiplayer. 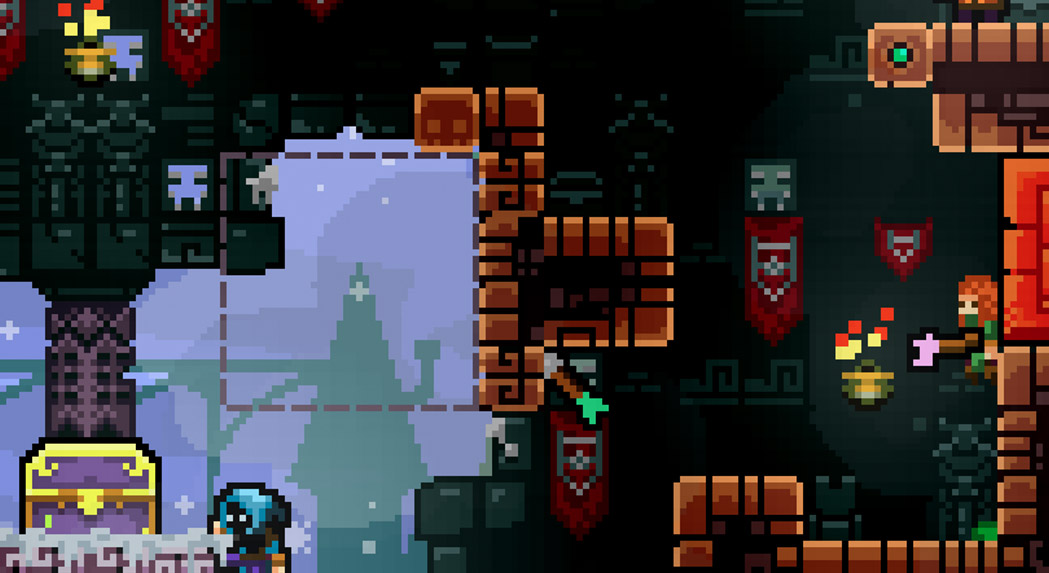 This is proving to be something of a dominant theme with the system so far, in that the Ouya marketplace is full of quick, easily accessible games that emphasize local multiplayer over online play. It's a refreshing change compared to the more hardcore and often-impenetrable shooters and third person titles on the Xbox 360, PS3 and PC. And it helps that everything is available for free, at least initially. 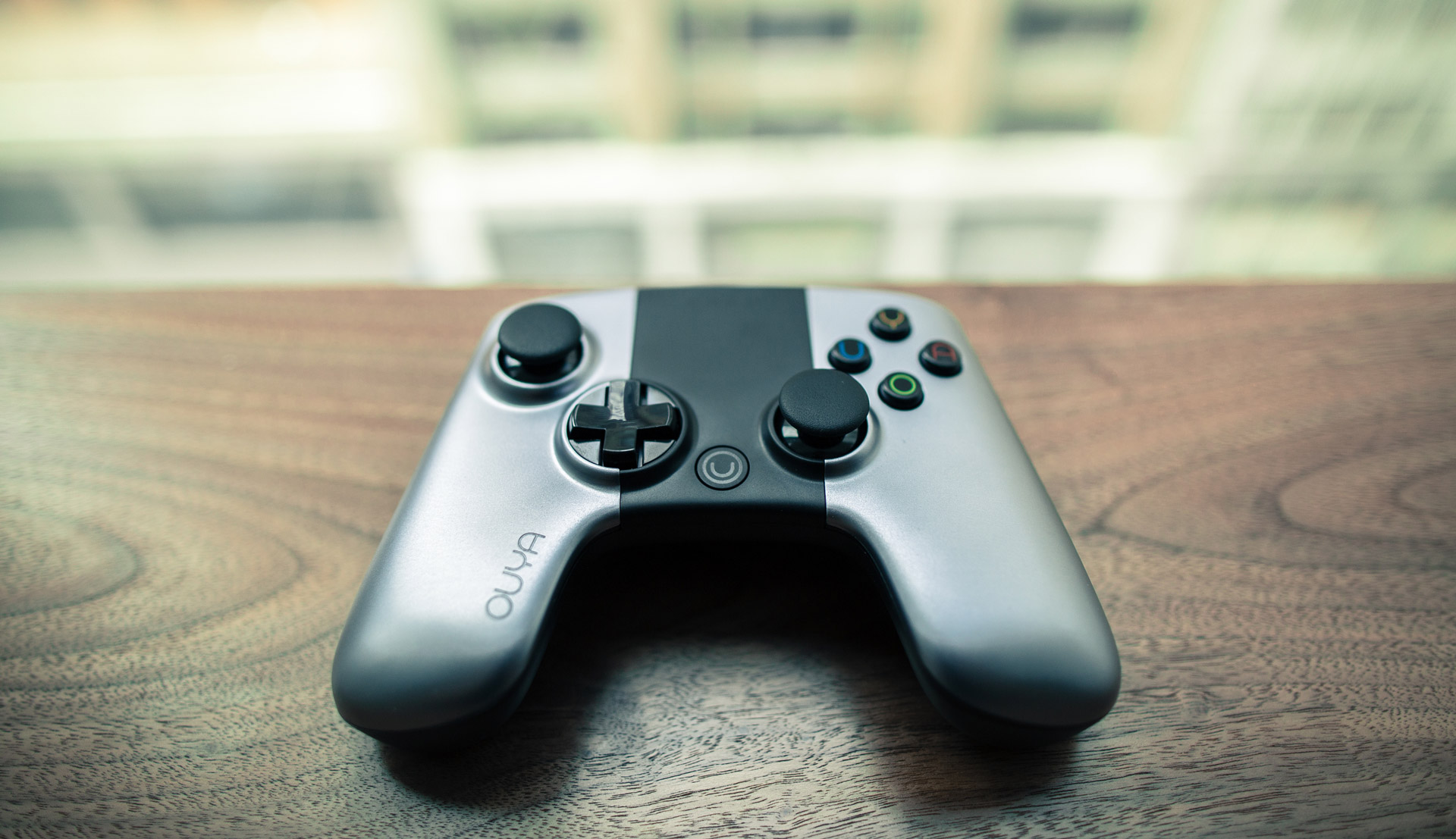 There's no getting around it: the Ouya's controller is awful.

From a distance, it's aesthetically similar to the console itself, but as something that will likely sit in most players' hands for the duration of their Ouya experience, it's more difficult to hide.

The surface of the controller isn't bad, and several staff prefer the offset analog stick placement, but other than that, there's little to redeem it. The battery slots are hidden behind detachable face panels that aren't as easily removable as they should be, and replacing them once the batteries are changed is also a little frustrating. The offset analog sticks have "soft" tension, and the dead zones seem poorly calibrated. The triggers feel cheap and often squeak amidst poor "throw" — they feel squishy and lack much in the way of resistance.

Worse, the Ouya controller's face buttons routinely stick after hours, even minutes of use. After our first hour of Towerfall, the right trigger was stuck and had to be pried loose.

This wasn't due to any particularly vigorous gameplay - simple, everyday use was enough to repeatedly get the buttons stuck. And in a slightly strange, often disorienting move, there is no Back/Select or Start analog on the Ouya controller.

This all combines to form a controller that is consistently unpleasant to use, so much so that our office strategy is now to instead sync Playstation 3 DualShock 3 controllers to the Ouya instead. This has been a superior stopgap solution to the Ouya's controller woes, but no non-Ouya controller has a touchpad like the stock pad does, which could prove to be troublesome if more games are created to take advantage of that feature. 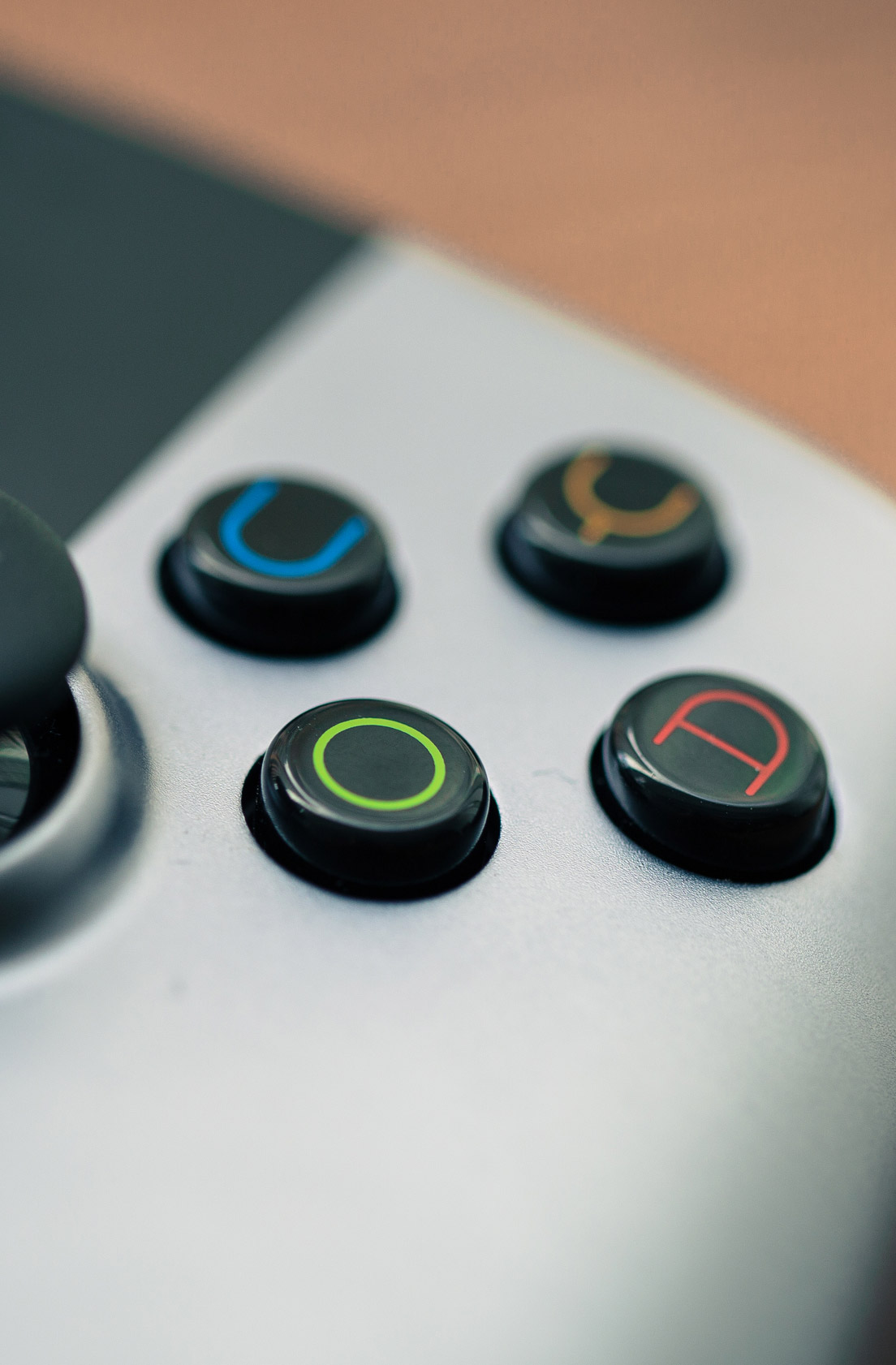 The Ouya can confound from the moment it leaves the box, or it can be relatively painless — and there's no way to be sure which of the two it might be in any given home or office. Set up for Polygon's review units ranged from fairly painless — shy the four foot power cable and three foot HDMI cable — to a full two hours in someone else's apartment.

Syncing controllers is unreliable and finicky, and a successful sync doesn't always "stick." This applied to the included Ouya controllers as well as additional PS3 pads. Just as annoying, the Ouya's wireless internet connectivity is horrendous, prone to interference and frequent dropped connections. We're afraid to turn off the console in our New York office for fear we'll have to attempt to re-sync the controllers all over again.

This is even more annoying due to a known issue — one among many, including bugs in the way that the Ouya deals with HDMI signals that can cause the system to turn back on after being put on standby — that will not allow wireless to be disabled within the main Ouya menu system. This can all be sidestepped by plugging in an Ethernet cable into the Ouya, but it is symptomatic of a system desperately in need of some sanding of its numerous rough edges.

Other problems include difficulty with loading content, in which the Ouya thinks an app is updating when it isn't. Dealing with system storage and stopping and then restarting a download requires a dive into the Ouya's options menu — and often the not-so-secret exposed Android system menus that are still accessible on the console. 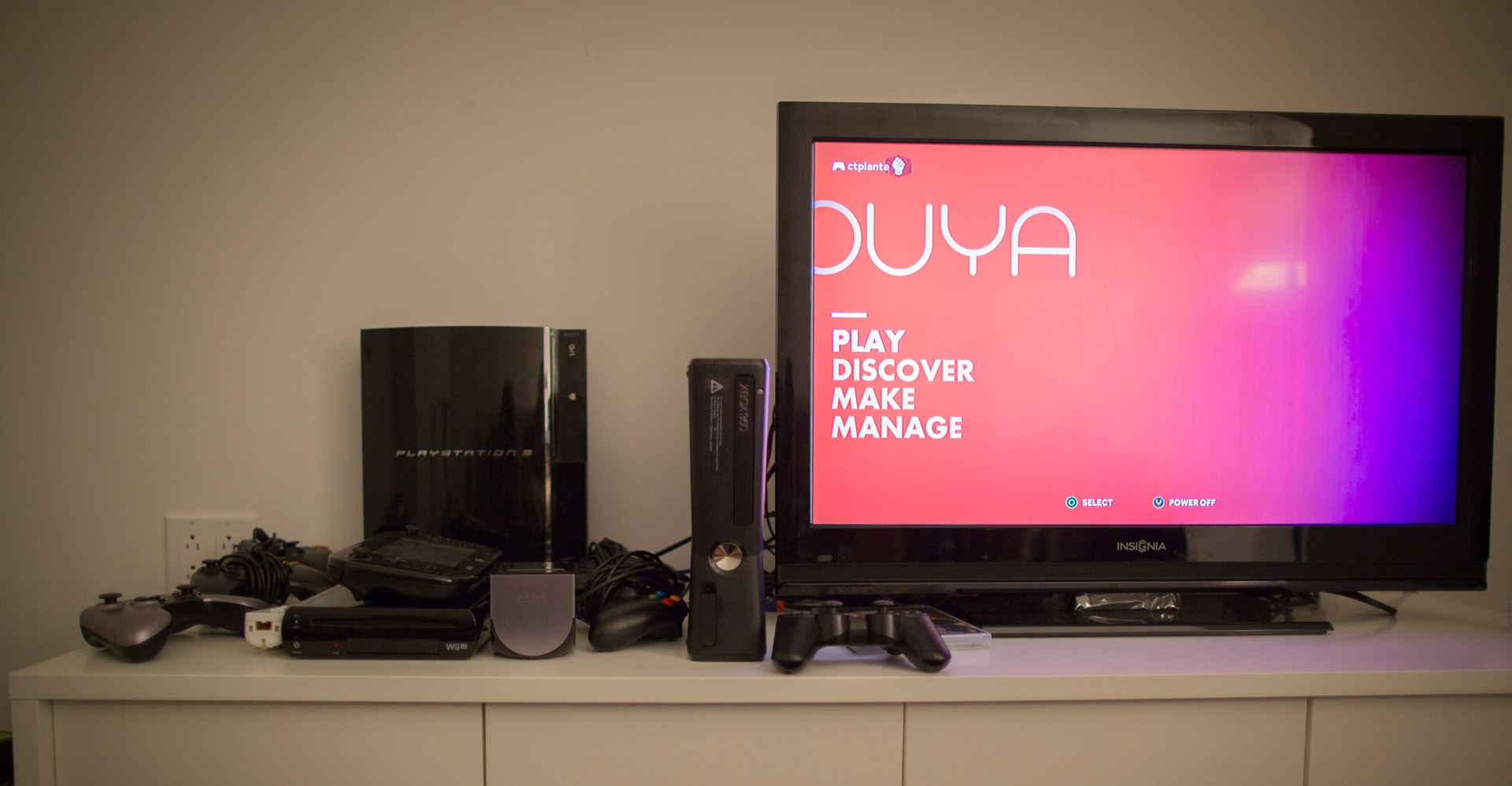 The Ouya's focus on local multiplayer isn't a coincidence; the platform doesn't have its own social layer along the lines of Xbox Live, PlayStation Network, Apple's iOS GameCenter and even Google's newly launched Google Play game services. It's much simpler to focus on local multiplayer than building an online component and this focus is almost certainly not entirely due to the Ouya's lack of infrastructure.

However, the absence of anything as simple as a friends list or leaderboard support only hurts the Ouya in its current incarnation. Many of the Ouya marketplace's arcade-style games have benefited from the asynchronous competition that leaderboards offer on other platforms. The store could use a friends list to surface interesting games that pals are playing. The absence of a social element is notable, even without a need or expectation of synchronous multiplayer games. Ouya has even acknowledged this shortcoming, stating that these social features are "on the roadmap" for "before the year is out."

As it exists today, in select retail stores around the country, the Ouya continues to subsist on opportunity and not execution. That all that opportunity wasn't converted, with alchemical efficiency, into execution isn't so much a surprise as it is a disappointment.

In the words of Polygon Editor-at-Large Chris Plante, the Ouya feels like a first draft. There's an intention there that seems possible to read, but it's marred by obvious mistakes. Like many of the games that grace the platform, the Ouya is rough. It's unfinished. It's a work in progress.

Still, the Ouya presents a means for developers to release a rough "alpha" product to consumers and upgrade it, for free, without the burden of a lengthy certification process, based on their feedback. With next-generation consoles still burdened by much of the friction that would have prevented a game like Minecraft from being created in the first place - even if it's able to thrive on the Xbox as a validated game after its inception - the Ouya presents an entirely new kind opportunity for game consoles. 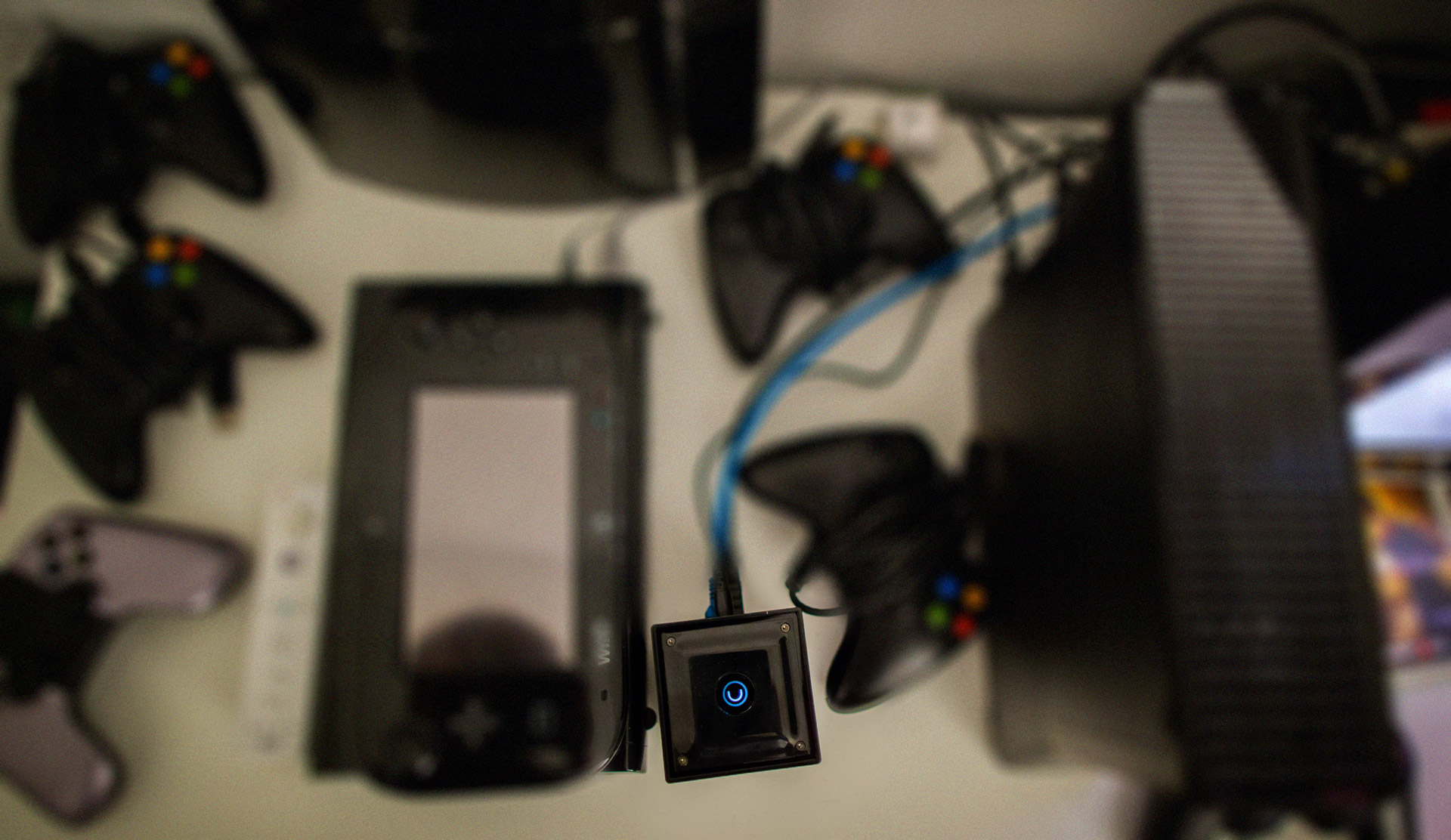 The Ouya's potential is matched by its rough edges

Whether or not its first-mover advantage is any benefit in the long run remains unknown; both Apple and Google are circling the same waters, either of whom could make short work of the nascent Ouya. For now, it's an interesting sideshow to this year's next-gen main event, and the first of many "mobile-powered" consoles to vie for a spot near your television. As a cheap, streamlined way of letting me play around with a boatload of games, the Ouya has some value. But it isn't currently poised to change the industry landscape in a meaningful way.