Shadowrun Returns marks an unlikely comeback for a property that last made its mark on the SNES and Sega Genesis — and we'll pretend that Microsoft's 2007 competitive shooter take on the series didn't happen.

Developer Harebrained Schemes announced its desire to return to the long-dormant Shadowrun series last year, along with a crowdfunding initiative to make it happen. Now, less than a year and half and a couple of million dollars later, Shadowrun Returns is the result: an unabashedly old-school overhead RPG, full of decks, magic and automatic weapons. But there's a problem with Harebrained's rabbit hole — it seems to run deep, but Shadowrun Returns never goes very far.

The game places you in the shoes of a shadowrunner — a mercenary who takes contracts for whatever pays in a cyberpunk-meets-D&D future. In the premiere "episode," The Dead Man's Switch, you're thrust into a bizarre conspiracy by virtue of a contract with a murdered ex-partner. Shadowrun Returns fires an effective, world-building salvo with the hows and whys of the contract and the death itself. The story works backwards from there like it's rebuilding the layers of an onion as you're quickly shown just what this future is.

This is all a little ironic, given how reassuringly old-school an RPG Shadowrun Returns is. You start the game by "rolling" a new character choosing a gender and race, whether a traditional human or a meta like an elf, troll or dwarf. Then you have the option to pick a largely pre-determined beginning class, or to walk into Shadowrun Returns' progression system with less of a safety line to guide you. 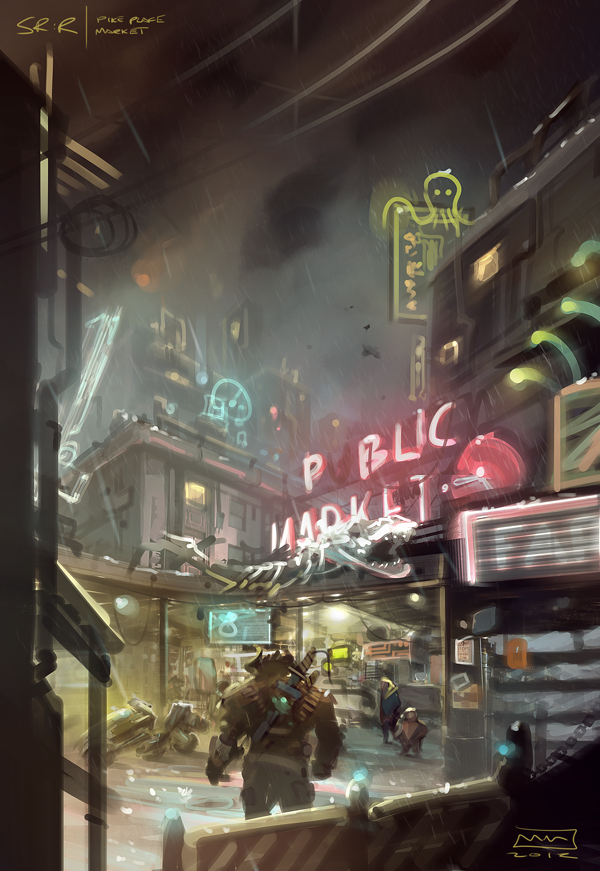 Shadowrun Returns runs on karma, points that you're awarded for completing objectives via whatever means happen to be at your disposal. Different skills will often allow you to solve problems via conversation options or more duplicitous means, which lends an air of personal consequence to the various interactions around the Seattle sprawl.

Sometimes that "interaction" is as basic as isometric, turn-based combat in various locales. While it's not up to the manic, life-or-death fueled tension of a game like XCOM: Enemy Unknown, there's a sophisticated enough cover-oriented, turn-based combat system at play in Shadowrun Returns. Some classes tend toward guns or melee combat, while others employ magic, drones or shamanistic powers to inflict damage or control the battlefield in other indirect ways.

every class and play style in Shadowrun feels viable

Shadowrun Returns effectively builds viable powersets for each class. No one can truly survive alone, and you'll almost always have a party to back up your character, but I don't think I ever felt helpless, even when all I had with me was an SMG and a deck — the tool some characters can use to hack into terminals and enter data stacks to steal information and assume limited control of security systems.

When they're not swarming with enemies, the isometric environments are also full of clues and terminals. They're also usually populated with NPCs with plenty to say, and how you've built your character can make a big difference in how those conversations and their consequences play out.

Maybe your decking skill or your etiquette knowledge of one of Shadowrun's various factions allows you to induce a conclusion and take a source by surprise, or know when you're being played — maybe that knowledge will let you play someone for more nuyen (Shadowrun Returns' currency) or trick them into leaving you alone with their data stack. For better or worse, conversation options that would be available to you with certain skills are visible during your interactions, making it clear that there's almost always more you could do — if only you had the skills to make it happen. This helps inspire a sense of real malleability and possibility to Shadowrun Returns even as the game fails to follow through on a lot of its potential.

Shadowrun Returns builds a sense of a depth to both its mechanics and story, but it never quite lives up to that impression — at least in its initial episode. The game walks itself up to the edge of the pool but flinches before it can jump in. It suggests, for example, an involved side quest system where you can take shadowrunning contracts from middlemen to engage in covert corporate warfare, full of system decking, silent assassination and information retrieval. But there are few opportunities to accept this kind of contract, and if you blink just once during the game you might miss them. 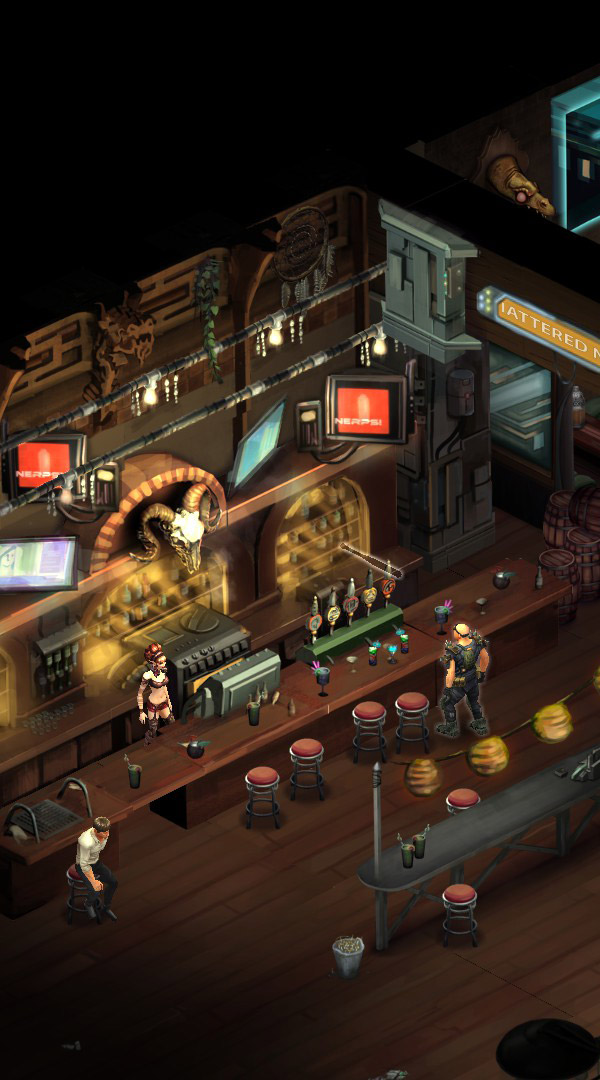 I'm loathe to complain about an RPG that doesn't force mindless side questing in order to grind out experience levels needed for survival later. The few chances Shadowrun Returns does present to venture outside of its main storyline of extra-dimensional conspiracy offer a pretty sweet taste, sketching a world that I wanted badly to learn more about within the context of the game. But I found I was on a short leash.

The story of The Dead Man's switch is rigidly linear outside of the few side options available to you — Shadowrun Returns is actually structured as much like an action game as anything else, as you move from level to level completing objectives and hoping to score more karma to improve your skills and abilities. This rigidity hurts some of the RPG elements that strain at its boundaries with their potential; there aren't many chances to earn extra money, which means hard choices between implants, weapons, armor or even better hirelings for your next run. 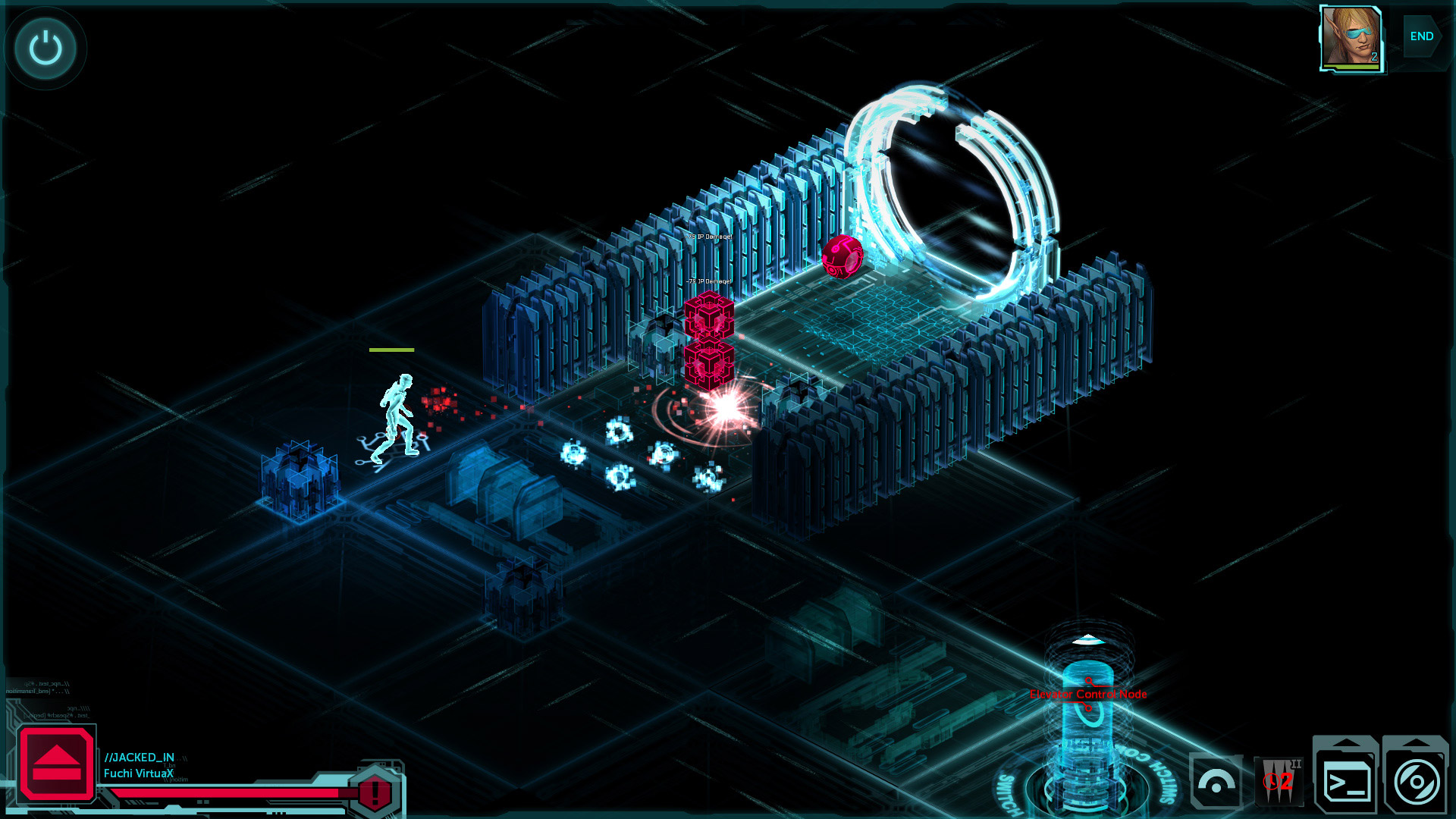 The gear situation is as indicative of anything of how shallow Shadowrun Returns can be. There are a few tiers of weapons, armor and spells — whether magical or virtual — that serve to break the game pretty cleanly into three acts. This worsens late in the game in the now-clichéd eye of the storm moment in the game's climax, where I was assembled with a powerful council whose goals aligned with mine (of course). I was told to stock up for the final section of the game courtesy of a hastily assembled crew of new merchants which a) didn't have any gear I hadn't already had more than once chance to buy, and b) didn't sell any medkits, which are indispensable later on — healing magic is still depressingly primitive in the cyberpunk future.

The lack of healing options shines a particularly unforgiving light on Shadowrun Returns' save system. During combat sequences — which can often stretch for as long as 15-20 minutes of turn-based life or death — it's game over if your character goes down, which throws you back to the last autosave. There's no manual saving in Shadowrun Returns anywhere in the game, whether you're in combat or back home. More than once I spent twenty or thirty minutes between missions tweaking my character, talking to NPCs gathering information and generally preparing myself for the next step only to realize that I couldn't save. It's a weird "screw you" to the idea of experimentation in almost every area of the game, because experimenting could cost you half an hour or more of time as you try to roll back the changes you made. It's a bizarre, borderline-unacceptable omission in 2013.

I tolerated this insanity because Shadowrun Returns' world and meta-narrative is so seductive. Even though I knew the merchants at my main hangout were unlikely to have any new gear since the last time I checked, I always talked to them anyway, hopeful for a new bit of character or maybe even a side mission. I was disappointed at the absence of the latter, but the former was almost always available.

It was rewarding to peel away the layers of Shadowrun Returns' fiction courtesy of characters that are fleshed out quickly and effectively enough to keep the world together. Almost everything you do in Shadowrun Returns does an admirable job of giving you just a hint of something more, of peeling the curtain back an inch farther to give you just a peek of information you didn't have before. I'm hopeful about the potential for more. Shadowrun Returns is clearly built to release new episodes, as well as new assets for players to create their own campaigns using tools similar to those Harebrained Schemes used to build the game in the first place.

Characters hold the story together

Despite the strange omissions and Shadowrun Returns' habitual blinking in the face of bigger gameplay ambitions, it's still an engaging return to a world and fiction that's sat dormant for far too long. Shadowrun is still a singular take on a pair of genres that have been drowned by clichÃ© elsewhere, and it's exciting to consider where the game can go from here. Here's hoping that Harebrained is willing to go a little further down the rabbit hole if they do.