Story hampered combat in BioShock Infinite, this DLC hopes to fix that

Share All sharing options for: Story hampered combat in BioShock Infinite, this DLC hopes to fix that

In some ways, BioShock Infinite's "Clash in the Clouds" challenge room add-on is an answer to some of the game's most vocal critics. But it's likely not the answer some of them were expecting.

BioShock Infinite's thoughtful narrative, steeped in questions of religion, nationalism, racism and the nature of self, was often derailed by how drenched in blood the game's overt action was.

Ironically, the criticism of the game's combat came at the developer from both sides: Some critics were upset by the level of violence, others at not the amount of violence, but how unevenly paced it was.

In working to address these criticisms, the team decided to solve the easier of the two problems and fully embrace the game's combat, delivering a more perfect sort of violence to those gamers thirsting for it.

The fact that the first new piece of BioShock Infinite DLC is combat-oriented, despite complaints about how it was combat that created a disconnect with the character, is not lost on BioShock Infinite lead level designer Forrest Dowling.

"It certainly has occurred to me," he said. "I think that in some ways a lot of the criticism has to do with the contrasts and in this DLC, I think we're straight up embracing that this is what this is. It isn't just the gameplay experience.

"I'm really happy that there was so much criticism and conversation going on, and I think it's been really fascinating, and I suspect that the segment of our audience that wasn't super into the gameplay experience are probably not the people who will be really into ‘Clash in the Clouds.' Ultimately, we're putting this together and I think there are a lot of our fans who will really like it — it probably won't be 100 percent of them."

And, Dowling says, that disconnect some gamers felt in BioShock Infinite cut both ways: The game's combat team was hampered in many ways by the game's story. In short, it got in the way of making the combat as fun as it could have been.

This DLC, driven completely by the game's combat team, seems meant to prove that theory. 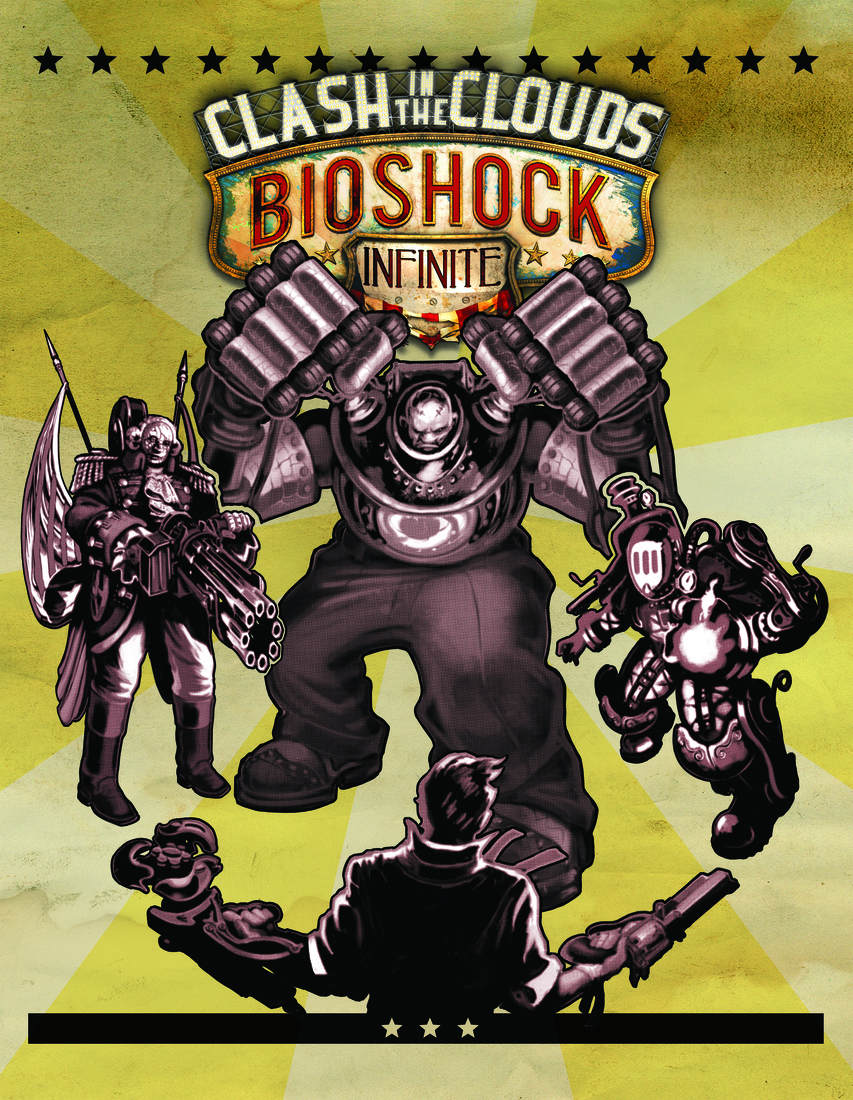 Gameplay opens with a quick fly through of the map, before dropping players into the shoes of Booker, with Elizabeth standing by his side. The first level of the first map, Ops Zeal, opens by describing the enemies you'll face and the challenge you can complete to receive bonus cash. The enemies and those challenges remain fixed for each level. So no matter how many times you play the first level of Ops Zela, you'll face the same enemies and the same challenge.

The decision to not randomize enemies and have players start in the same spot every time was driven by a problem Dowling saw in BioShock Infinite.

"Some of the early versions were more randomized and one of the things that I found in doing that — you may also notice that, in wave after wave you also start in a set position — that the combat in Infinite didn't work as well in my opinion when it was completely random," Dowling said. "Everything that we built, we built because we were making it in Infinite. Every encounter in Infinite, you always know roughly where the player is going to come from. You know where the enemies are going to start and the AI is sort of built around those assumptions. And we found that when we were just spawning the player at random spots and spawning enemies at random spots, you ended up with a much weirder, chaotic, less fun experience."

Dowling said that the introduction of the leaderboard also played a role in that decision.

"Whenever you start introducing something like leaderboards, whenever you want to create something where there can be legitimate competition between people, there's always a tension between when something's is really random versus when it's very clear and predictable," he said. "I don't think that there's going to be MLG people playing "Clash in the Clouds" or that we're really going to be huge in the competitive scene but I always try to think in those terms when doing anything where multiplayer is a concern in one way or another."

Dowling says that despite the quantity of things cut from BioShock Infinite over the course of its lengthy development, none of that content made its way back into "Clash in the Clouds."

"Whenever we cut something, it's for a very good reason," he said. "Having worked on many, many, many levels that have not made it to completion, I can also tell you that, generally when we cut stuff, work goes into it but it's still far, far, far from being anywhere remotely like anything we would ever ship.

"We're pretty ruthless, but we always cut with a good reason. I think our general feeling is if we cut it once, there was a reason we did it and we're not going to bring it back just because it's laying around."

Another tweak that Dowling and the combat team made in "Clash in the Clouds" was to the game's AI.

"Something we were trying to do as well, that we thought we could do a little better than Infinite, one of the standing rules when I laid out when making all these encounters for ‘Clash in the Clouds' is that the enemies don't know that you're there until you alert them in one way or another," he said. "We're going to put the enemies on a bunch of patrols, they're going to be wandering around, so you can sort of wait and observe and strike when you're ready. What that can result in is starting positions can change, as guys are taking a Skyline and just moving around their patrol path."

In action, the ability to spy on enemies without having them immediately attack you, allows the player to come up with a sort of game plan for taking out the bad guys on a level and better weigh the risks associated with trying to achieve the level's "Blue Ribbon Challenge."

In one level I played, for instance, I was asked to take out a Handyman with just a pistol. After a few minutes of scouting, I decided it wasn't worth the risk. While you can restart a level as many times as you want, you lose the points you earned toward the leaderboard score when you die. To get a high score, you need to survive as many levels as possible on a map, pulling off as many challenges as you can swing, and trying to pack in special multipliers, like double kills, environmental kills and forced friendly fire kills.

Initially those Blue Ribbon Challenges seem like they were created to get you to try different approaches, but as you work your way through a maps levels, and move on to the more difficult maps, those challenges go from pushing you to try new things, to becoming painfully difficult.

"There are some that, in the process of finalizing this and QAing it, I was needing to ask, ‘Tell me, can a single person in QA actually accomplish this?' And the answer is ‘Yes, one guy did' so it's doable and we're going to go with that," Dowling said. "But there are some that are going to require that level of perfection. I need to be equipped with these things, this gear, as soon as the map starts I need to go here and do this thing, then go do this thing and then go do this thing and then I'll get the Blue Ribbon."

This perfectionist approach to tackling the levels also makes it appealing from a sort of speed run perspective. There's something fun about playing and replaying the same, even easy levels, trying to see how quickly and cleverly you can dispatch the enemies.

I ran through the first level of the first map maybe a dozen times, not because I had to, but because I wanted to, zipping around on the Skyline, hopping around the map to pull off flying melees and quickly disappear again on a line.

The game's four maps are all relatively small, though two are much more concentrated experiences. The two larger maps have Skylines that can move players between multiple floors of buildings and around a variety of hiding spots. All of the maps are packed with tears that can be used to bring in cover, environmental dangers that can take out enemies, weapons, ammo and the like.

The gameplay is swift, brutal, and always engaging. There's little time to think about any lack of narrative, or deeper meaning because you're too busy trying to survive or complete a challenge.

All of that playing and replaying will reward players, if not with a high score, then with cash they can use to upgrade their Booker or unlock concept art, music, models and videos in a museum.

Both game designer Ken Levine and Dowling were clear that unlike the upcoming "Burial at Sea" DLC, "Clash in the Clouds" is not canon or in any way narratively driven.

Given the ultimate nature of the game and its ending, Clash certainly could have been tied to the ongoing story of Infinite.

"Absolutely," Dowling agreed, it could have been tied to the game's story. "It just seemed like it would probably be a bit too tortured on our part to try and make that work or try too hard to ground it. Really, the whole goal right from the get go was to just make something that is just dumb fun."

Levine was more blunt in his answer to the same question:

"Just because you can do something doesn't necessarily mean you should," he said. "I mean, once you open up Infinite, and the reason to some degree that we had that revelation at the end of it, is because you have to make sure that — if anything can happen, nothing really happens, you know? And so, we made a deliberate decision with ‘Clash in the Clouds' as a sort of meta concept that it's really gameplay and never expected people to actually believe this was happening in the narrative.