Swords and sorcery and cleavage abound in Dragon's Crown

The combat and wide variety of enemies play to Vanillaware's strengths. But the game's repetitive structure and a troublesome presentation of women prevent Dragon's Crown from transcending its juvenile influences.

Dragon's Crown rests on a paper-thin premise: You are a roving man or woman of the world, out to seek adventure in Hydeland. Before long, you're embroiled in royal politics, and battling hordes of fantastical creatures while investigating the awakening of an ancient evil.

Before long, you're battling hordes of fantastical creatures

At the adventure's outset, you pick from six available characters: the Amazon, Fighter, Sorceress, Elf, Dwarf or Wizard. The selection is well balanced for a variety of playstyles, with a nice mix of slower, heavier melee fighters, ranged attackers and magic specialists. Dragon's Crown is at its best when running with a party of different classes that can support each other via drop-in co-op, though you have the option to go solo or with AI partners as well. 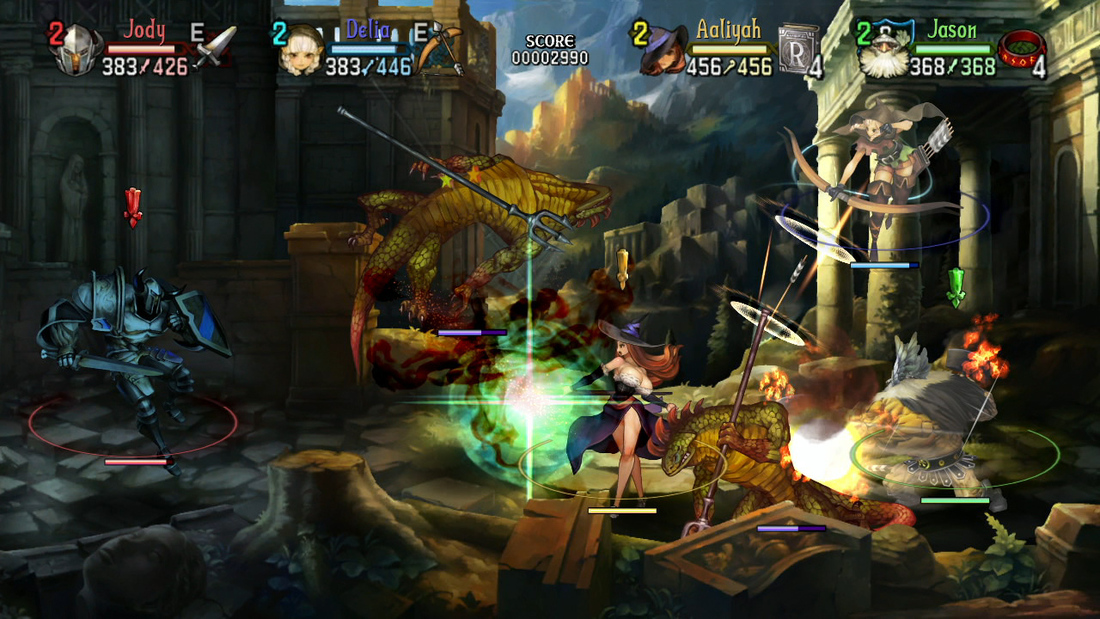 Levels are set on a 2D plane, often filled with enough enemies to completely cover the screen. The pace is relentless. I sometimes lost track of my own character amid the chaos, but this isn't really a problem. Dragon's Crown rewards bombastic moves and has little patience for subtlety. While you can block and parry, it's more effective to mash the attack button and dodge only as needed.

Dragon's Crown's combat system is bolstered by its enemy variety. There are dozens of different beasts, mythological creatures and medieval jerks to beat up, all in their own themed stages. Some levels have you facing off against hordes of undead, while others feature demons, orcs or, you know, possessed tiger-dog … things. It's not just a game of numbers either; every enemy type requires a unique approach. Flying demons call for well-timed jump attacks, for example, while lumbering undead need to be beaten into a pulp at close range then avoided as they explode into green goo. The monster diversity helped to counteract the combat's mechanical simplicity, which is especially well realized in Dragon's Crown's boss fights. 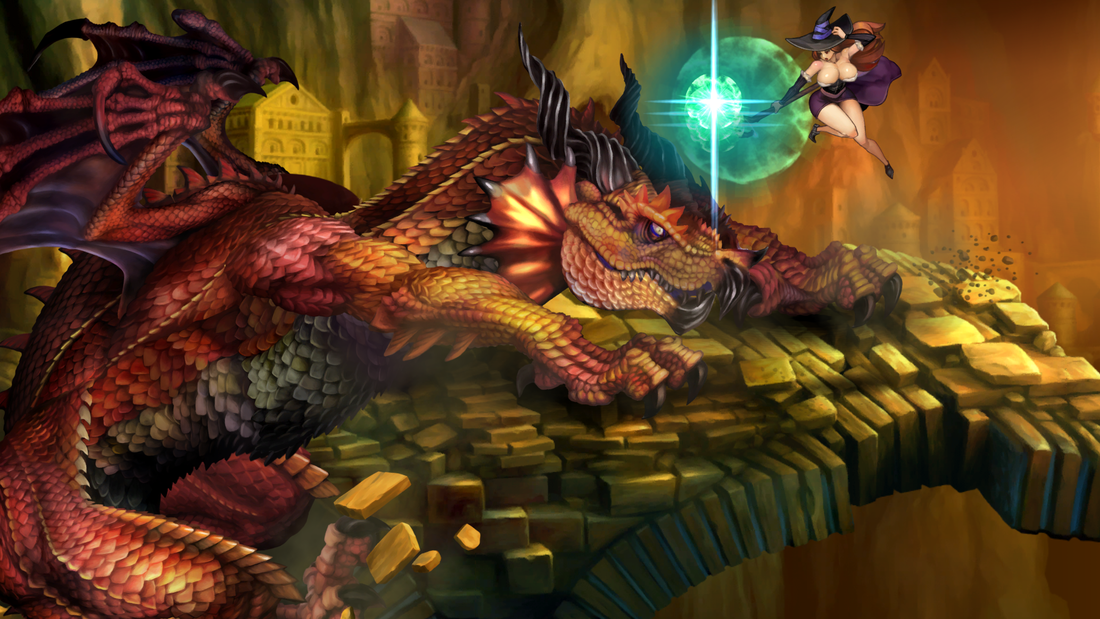 Dragon's Crown is being released simultaneously on the Vita and PS3. It's precisely the same game, with the nice touch of cross-platform saves that allow you to easily move between the console and handheld versions. Some things work better on Sony's handheld — the touch controls are seamless (whereas using the right stick to "point" to objects can be awkward in the PS3 version), and the feel of the game is subsequently smoother. But reading stat screens can be a chore on the smaller screen, and there is occasional slowdown when too many characters flood the screen. 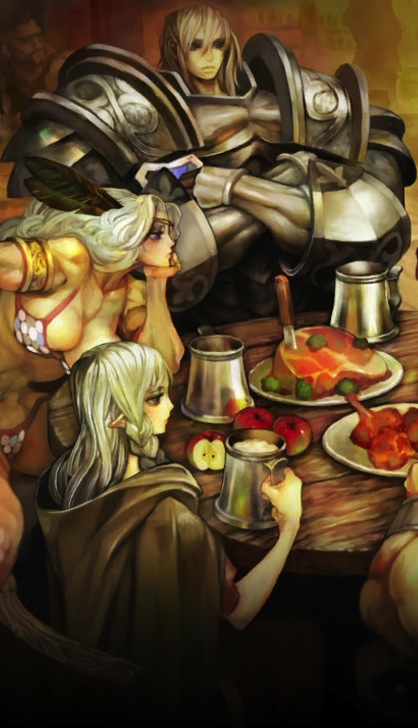 Boss fights were routinely my favorite part of the game

Each stage has a resident big bad, eventually offering two to choose from. These are the most strategic and interesting parts of the game. Facing off against the Minotaur, for instance, requires perfect timing around his charge attack, while the epic battle with the red dragon is part platforming challenge, part beatdown. These fights were routinely my favorite part of the game, adding welcome challenge and more variety to the mix.

In between battles, you can choose to continue on to the next stage, or hang out in town, where you can buy and sell new gear, "resurrect" bones of the dead that you collect in combat — and subsequently select them as your AI buddies — and learn rune magic. The resurrection mechanic is a godsend for players going it alone, and the game makes it easy to select characters that complement the skills of your own chosen fighter. As an Amazon, I was always selecting magical and ranged companions, sometimes adding one more heavy melee character to round out my damage-dealing capabilities.

I had to diligently explore and open treasure chests during adventures to guarantee that I was well stocked with a steady supply of stuff, and I enjoyed outfitting my Amazon with the best gear for my kamikaze playstyle. This, along with a simple skill points system, add a welcome bit of customization in a game that otherwise levels your stats uniformly.

At the adventurer's guild, side quests are selected and turned in for rewards including XP, skill points, in-game gold and even concept art. Quests are often predictable, but the best required me to explore secret rooms or look for bizarre details in the background scenery.

The change of pace offered by the side content was appreciated given how repetitive Dragon's Crown's core structure often is. The game forces repeat visits through many of the same stages. As there are only around nine levels (with one branching path each by mid-game) stretched over 25+ hours, I was stuck replaying the same areas dozens of times. The game incentivizes continued play with a hard mode that unlocks after beating the final boss on normal difficulty, and a whole new quest to kill another ancient evil opens up. But again, the contents of the stages — and the bosses themselves — are the same, just more difficult. But as frustrating as the grind became, Vanillaware's aesthetic decisions were much more alienating.

Dragon's Crown is presented in a lush, hand-drawn style, with gorgeous environments and detailed animation. Each beast, unholy creature and player character has been lovingly rendered. But that attention to detail is a double-edged sword. 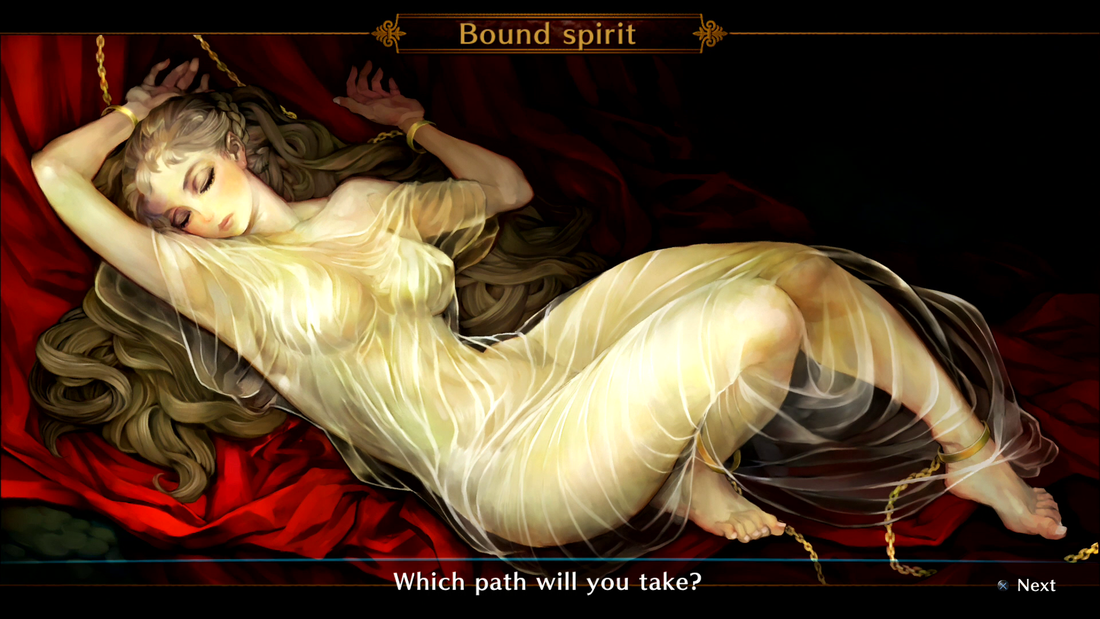 Dragon's Crown's serious liberties with female anatomy are distracting. Two player characters — the Amazon and the Sorceress — are explicitly sexualized, with breasts literally bigger than their heads with rear ends to match, and plenty of the screen real estate is dedicated to their respective jiggles and sashays. But at least these characters are powerful women, with agency and a penchant for destroying rooms full of bad guys.

The same can't be said for the female NPCs that fill Dragon's Crown's dungeons and other environments. Most of the women in the game are barely clothed, with heaving chests, backs twisted into suggestive positions, some with their legs spread almost as wide as the screen. They're presented as helpless objects, usually in need of rescue. It's obvious, one-sided and gross.

Dragon's Crown makes a strong first impression. It's a fun mix of RPG tropes and dynamic brawler action. But I found its over-exaggerated art style alienating and gross in its depiction of women even as it shines in building a world of fantastic monsters and environments, and the forced grind through the same stages dulled my excitement. Dragon's Crown is a wild place to visit, but it doesn't quite hold up in the light of day.