How H-Hour aims to bring SOCOM back to life

Share All sharing options for: How H-Hour aims to bring SOCOM back to life

There are many shooters, some of which offer features not unlike SOCOM and its successors, but for a significant number of gamers, there's nothing quite like the original, with its deeply tactical perma-death, team-based gameplay.

Nothing that is, with the possible exception of H-Hour: World's Elite, which is being created by SOF Studios and David Sears, former lead designer on the SOCOM series. The Windows PC and PlayStation 4 game, he says, is a "spiritual successor" to Sony's tactical team-based online shooter franchise, currently in hibernation. Sears has hired some of his old chums from the Zipper Interactive days to pull together a demo, that can then be shopped around to potential investors. This being 2013, a Kickstarter is also underway, which has achieved its $200,000 goal with a few days remaining.

"In some respects everything old is new again," said Sears. "I am resetting my designer's mind to where I was at the end of SOCOM 2 [2003]. What I was intending was quite different from where the franchise went. I was always about pure responsive gameplay and only including features around that primary mechanic." 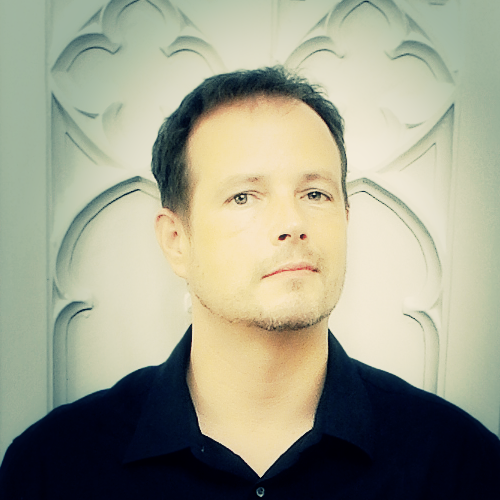 SOCOM has acquired a reputation over the years, of being hardcore, but Sears says this is inaccurate. "It's old-school rather than hardcore. People like to say SOCOM was so hardcore but that only happened when players got really, really good at it. We had just given people the tools to build skill over time."

And this is one of the differentials that H-Hour is seeking to bring, ranged as it is against multi-million dollar franchises like Battlefield and Call of Duty, among others. H-Hour's focus is on team-work based on real-world relationships, not just random lobby match-ups. Of course, many games offer these options as part of their toolset, but for H-Hour and SOCOM, it's core to the experience.

"That's what the fans have been telling me for years," said Sears. "You can go for this mass-market approach where it's like 'Hey, let's just randomly hook people up,' or you can try to do what the original SOCOMs did which was encourage people and give them as many tools as possible to make lasting relationships.

"These clans have been together for ten years now. We want to give people the ability to do that all over again. Returning to lobbies and automatic matchmaking when you have 17 million people is not efficient, It just adds a barrier between you and playing the game, so a clan system encourages people to play together more frequently."

Gavin Owens started playing SOCOM when the first game launched on PlayStation 2, ten years ago, and joined in with two clans, Death Elements and Cuties Version 2. The first, he recalls, was a group of people who were happy to compete against way better teams, the second were more skilled and competitive. He is still friends with many of his clan-mates.

His response to H-Hour? "I literally got chills when I heard the news. This is what we've been waiting for," he said. There are a lot of people who hark back to SOCOM as a golden age in shooters, even though today's games are vastly more advanced in terms of options, visual fidelity and smoothness. "The teamwork required to win a match is the main aspect," he said. "In opposition to respawn focused games, the round-based gameplay became extremely important to SOCOM's classic, heightened, suspenseful firefights. This depth of gameplay and community is something that I still can't find in today's otherwise great shooters."

We are bringing back team-work and communications, that SOCOM-style of gameplay

Sears says he will make clans and team-work a central platform for H-Hour. He's being aided by SOF Studios president, a former special ops combat veteran called Tom, who declines to supply his surname. Tom spent 20 years in the U.S. Army including time with the 82nd Airborne in the first Iraq war, with 75th Ranger Regiment in Afghanistan and with the Fort Bragg anti-terrorism unit in Iraq.

Since his retirement from the military he's been casting around for a new challenge and, after becoming acquainted with SOCOM through a friend, decided to create a new game based on the franchise's central experience. A year ago, he approached Sears with this notion, and they began working together from an office in North Carolina.

Tom will be supplying the sort of inside military know-how that most games companies use via consultants. Although Army input is the norm for shooters, it's unusual to have a military man overseeing a shooting game. 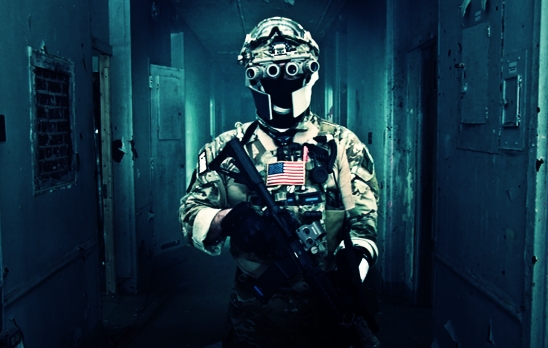 "I know a lot of guys who have done consulting for games companies," said Tom. "But the difference here is I can give David the information and insight he needs in minutes, not days. Sometimes with consultants you have to go through a bunch of gates to talk to them, having me on the project speeds everything up. I am checking as it goes so we don't have to backtrack."

"He can answer any question I have about the military," said Sears. "Previously, I have worked with military consultants but it's on a drop-in and drop-out basis. Tom is watching designs to make sure they are authentic and honor the people in the armed forces. If I have questions about firearms or tactics or explosives I don't have to send an email to someone in California and wait days for a reply, I can get that right now and show the results in the game right now. It has cleared the path to put realism and authenticity in the game."

As their slightly caustic, slightly cookie Kickstarter video shows, realism is a big deal for these guys. It's clear that they're enthusiastic about the whole world of military tactics. They want to make a game that reflects not merely the firearms and the tactics, but also the camaraderie. 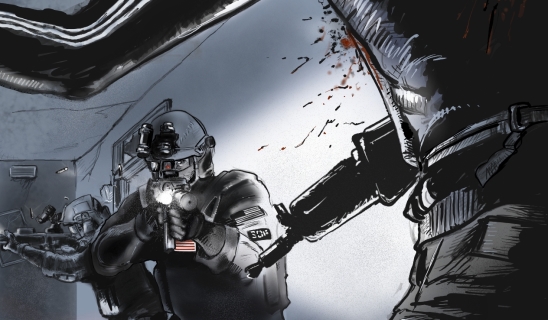 "That was my life for 20 years,' said Tom. He does not believe that any game can ever capture what it is like to be in a combat zone, but he says that working with other guys, watching each other's back, is the single most important facet that can be reproduced in a military simulation.

"We are bringing back team-work and communications, that SOCOM-style of gameplay, where players get together and talk, collaborate, plan, organize," said Tom. "For me, that is lacking in a lot of shooters, That style of gameplay is very similar to being in the military, it's about your teammates and the preparation and thinking about what you're going to do and then going out there and performing. It was an easy thing for me to grasp because that's what I did in my career for a long time."

At its heart H-Hour is a spiritual successor to SOCOM

SOF Studios wants to give players the fantasy of realistic military combat, rather than a a fantasy that is loosely based on military combat. The plan is to get a demo finished in the next five months, with an accompanying video showing team and clan-based tools, and complete the game within 18 months, based on further investment. Players will receive multiplayer maps first with embellishments and a single-player campaign to follow.

"At its heart H-Hour is a spiritual successor to SOCOM, which was very skill based," said Sears. "Most of our mechanics and maps were derived or inspired from real world tactics from the armed forces, about movement over terrain and the protocol over who looks where in the team and what flank you cover and all that stuff. With SOCOM, I was always really happy to see when people started doing that naturally and formed clans and stayed together."

But this being a commercial world, Sears doesn't want to entirely ignore the vast hordes of gamers who are entirely happy with explosive military fantasies. He wants to bring them in, to enjoy the tension of SOCOM-style tactical gameplay. "There is a community of SOCOM gamers who want H-Hour to be as realistic and tactical as possible," he said. "But we're also providing customization tools so that, if you want to create a game that is all about grenades and shotguns and has respawn points, you can go for it.

"You can totally play like that and there will be presets for people coming from Call of Duty. But I think people will be drawn to the primary focus of the game. They will want to test themselves and their friends against other people."