The game was initially developed as Rambros, an entry to the April 2012 Ludum Dare #23 Game Jam, where it won first place in the fun category and placed high in groups awarded for the best graphics and high humor factor. After the warm reception at the game jam, the team at South Africa-based Free Lives Games continued to tweak and add content to the game.

"Then we thought, we can add co-op with [another character] Brommando — and it just grew from there," Greenwood explained. "The idea that [the game] would have bros, and would have this kind of violent action movie feel... It was just going to be that kind of thing. 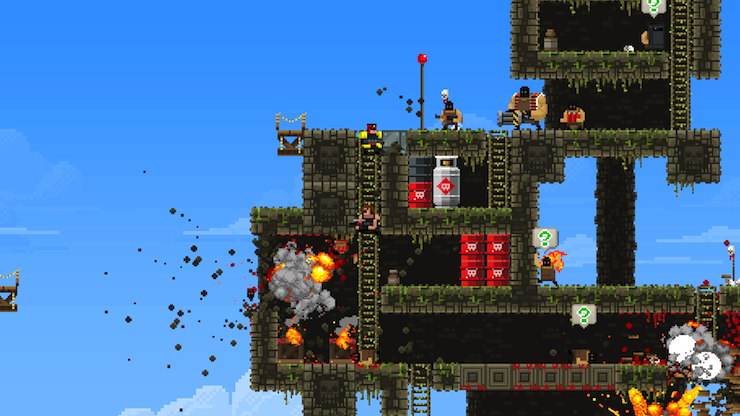 "Somewhere in development of that game, I started really feeling this bro idea," he explained, "and in Broforce it became a loving portrayal of action heroes. I'm in love with 80s and 90s action movies, and as soon as they were involved [as sources] it became this thing about going into outer space and fighting dinosaurs and shark racing. There are so many things we can do with this concept."

So for Greenwood and his team, what exactly is a bro?

"[The appeal] is, a bro would do anything for his bros," Greenwood explains. The machete-wielding gun-toting bombastic heroes of Free Lives' game will work together to save America, defending their comrades in tight spots and teaming up for Grindhouse-style terrorist takedowns. "I don't think we really see [being a bro] as a negative."

Greenwood noted that the studio is currently working to incorporate what they feel is a very important new element into their title: female heroes. 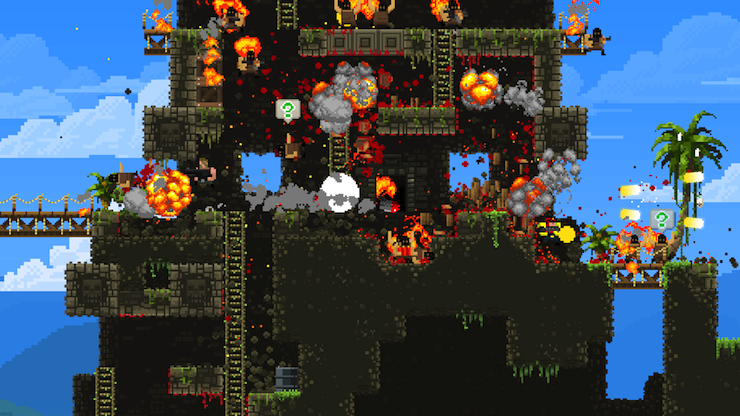 "A lot of our discussions of what makes a bro eventually turned to, what would a ladybro be called?" he said. "But we decided that separating the characters by prefixing them with 'Lady' or 'Female' isn't really the female equivalent of a bro. Calling her something else, using that [prefix], would be a separate thing, and we really didn't want to do that."

The challenges of adding women to the game at all, Greenwood said, is not that women can't embody the spirit of the fiercely strong and protective bro — it's more about the game's nature, which is intentionally offensive at times. Players will spend a large amount of their game time triggering massive explosions and gunning down terrorists. Greenwood's team still needs to determine if adding these characters would be a logical fit.

The game is a bit insensitive at times... It's all about glory and shooting bullets, and being manly."

"It's not a gender thing, it's just about the bros — they all just want to fight the good fight, stand up with each other and protect each other. The game is a bit insensitive at times, and we're not exactly weeping for these terrorists; it's all about glory and shooting bullets, and being manly."

"We debated adding female characters a lot, and decided eventually that we didn't want just a token female, because that would just be awkward and wasn't really fair," Greenwood said. "That would actually be really revisionist of action hero history. 1980s films were dominated by males literally roundhouse kicking people. But then you have [characters] like Ellen Ripley from Alien, and she kicked the ass of every male. The female characters are deserving, we definitely intend to introduce them."

At one point the team toyed with the idea of creating a rival Broforce of all female characters, a set of competitors that would save the day once the male Broforce screwed up. While the bros were "destroying everything and wasting taxpayer money," the ladies would come in and clean up, and maybe there would be a little bit of romance thrown in — another premise that didn't sit right with Greenwood.

"The separation didn't sound right," he said. "I think it's better if they are all a team. There doesn't need to be any sort of distinction, and no corny romantic stuff. Lots of bromance, but no romance."

Free Lives doesn't intend to make too big of a distinction between the "ladies and the dudes" of Broforce in terms of skills once they introduce them as playable characters. These women will also carry "bro" somewhere in their name, and there are already plans to make Broforce versions of Ripley, Tank Girl, Terminator's Sarah Connor and even "The Bride" Beatrix Kiddo from Kill Bill. 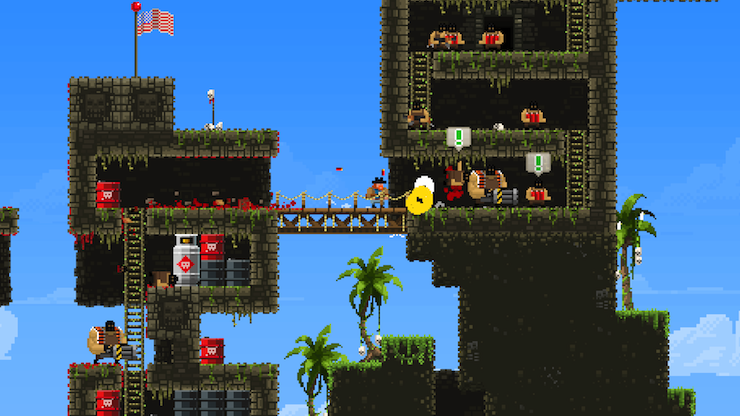 "They're all action heroes united to defeat terrorists," Greenwood said. "They can be any-bro."

Broforce is available as a free playable "Brototype" via Free Lives' website, where players can get a good look at the game's mechanics, steeped in firepower and bro-fueled corniness. But what the demo doesn't show much of is the game's narrative, which Greenwood said is still being fine-tuned.

"We want to have a big space action opera, maybe something like a roguelike, and by the end of the game Brofroce will be saved more than once," Greenwood said. "We do hope to include more aliens, like Contra-esque aliens, and a subplot with Satan trying to take over corporate America... Zero gravity explosions, big themes like betrayal and more about of the identity of being a bro."

One of Greenwood's ideas about understanding bro-dom involves a cyborg modeled after Star Trek character Data: a bro-bot who does not know if he's a bro or not. Greenwood said this bro-bot would question his bro status because he doesn't have feelings — only to realize none of the human bros really have feelings either.

"There's a place we definitely wanna go with the story." 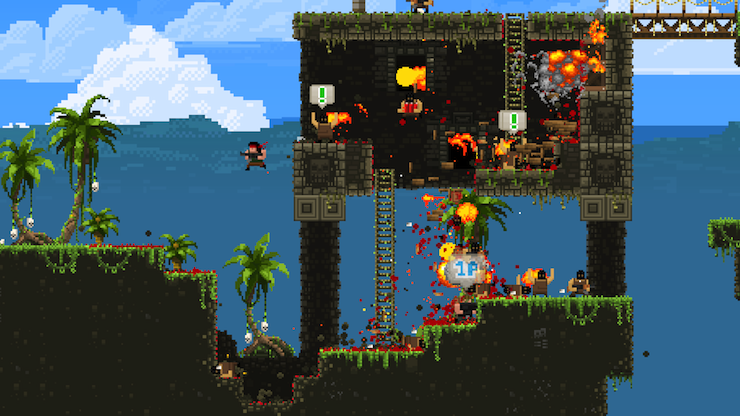 The decision to borrow aesthetics and themes from 80s action movies was because Free Lives did not want to make a serious game. Brofoce is a fun hyperbole of the action genre from that era, and there are certain elements — mostly revolving around war and foreign relations — that don't sit as well with audiences now.

"You look at a movie like Commando and you see Arnold Schwarzenegger going from killing bad guy to bad guy, there aren't any consequences," Greenwood said. "And at the end they just pat him on the back and say, 'Well done, you destroyed everyone.' When you were a kid watching these films in the 80s, you thought it was the best thing you've ever seen. But now it can't work that way, because people have the internet and are aware of the things going on in foreign countries. It's more complex now, we can't just have Rambo going into Afghanistan and waging a one-man war and then riding horses at the end and being like, 'This is for the people.'

"It's wonderful that we could think that way then, but to some extent that's why it can't be so funny now," he added. "If we focused on a more modern portrayal, we would have to be more serious, and we really don't want to do that. But everyone has an opinion — this stuff is just part of our cultural heritage, we grew up watching these films."

"It's not about getting drunk and being irresponsible, it's about standing up for what's right and the positive side of manliness."

Broforce is currently on Steam Greenlight and Free Lives hopes to launch a pre-order and beta access campaign in the near future. The full game's launch is dependent on reception to the beta program and how long it takes the team to accordingly tweak the final features.

"Through making the game, we have a much more positive view of what a bro is, I think," said Greenwood. "We hope this becomes a cornerstone for what people think bro culture is. It's not about getting drunk and being irresponsible, it's about standing up for what's right and the positive side of manliness."