Share All sharing options for: Why Anki chose to start a consumer robotics revolution with a real world video game at WWDC 2013

About 10 minutes into Apple's WWDC 2013 keynote last month, CEO Tim Cook invited the first and only third-party developer to share the stage for a few minutes.

As Cook walked off, he shook hands with Boris Sofman, the co-founder and CEO of Anki, who walked onstage with what looked like a rolled-up rug underneath his left arm. Sofman introduced the company with a few sentences about artificial intelligence and robotics and rolled out the rug-like swatch at center stage to revealed his company's first product, Anki Drive.

Sofman and his partner placed three small cars on the mat, which was painted to look like an oval racetrack with a gentile upward bend in the straightway closest to the audience. The blue, orange and white cars began to circle the track in various formations.

Sofman explained what was happening. The cars were driving themselves, he said, making decisions in real-time, tethered through Bluetooth to an app running on an iPhone not far downstage.

Then Sofman added a fourth car, a cherry red speedster he called Aiden, which he said was programmed to pass the others. 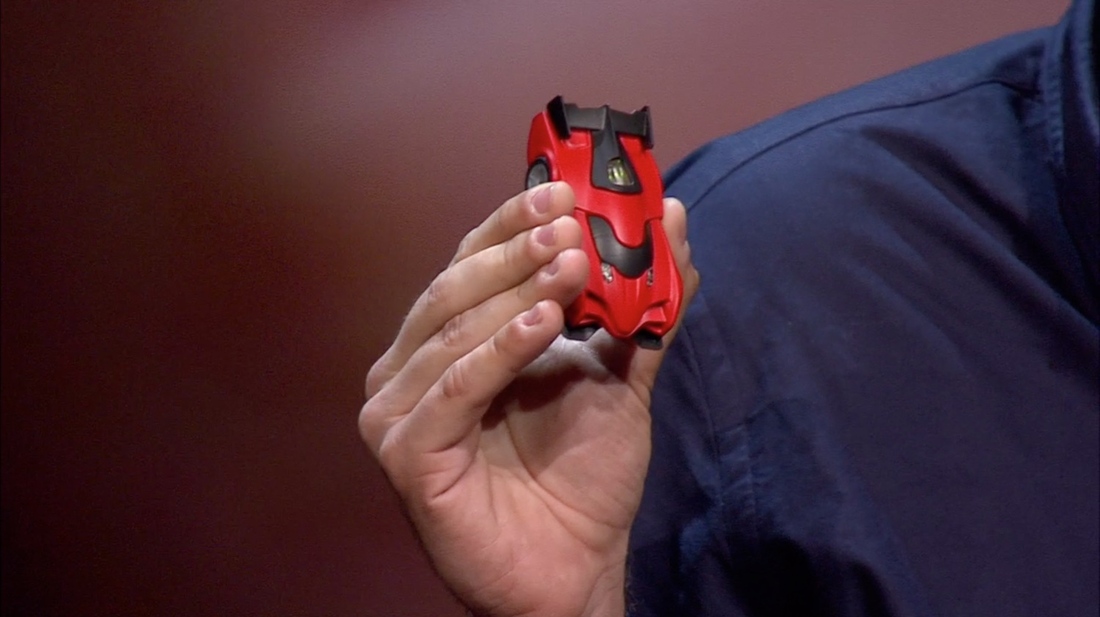 Aiden began with his virtual pedal to the metal, popped a wheelie, righted himself and passed the orange car by the time he reached the first turn. He hit the gas, navigated through the southern bend and squeezed by the blue car on the inside of the second turn. Just over a lap after he'd begun, Aiden had passed the white car, well on his way to lapping blue and orange.

It was an intriguing, if momentarily confusing demo until Sofman dropped the hammer. Sofman's partner used the app to change the cars' behavior. Aiden's mission remained the same, but the original three had a new objective: Don't let Aiden pass. Aiden tried, but the original three moved to block him at every turn. Aware of their surroundings, they formed fluid walls to block him as he steered, accelerated and decelerated. There was nothing Aiden could do.

Well, nothing until Aiden unveiled his arsenal. Gunfire erupted over the loudspeakers. The blue, orange and white cars careened off the track in response to the virtual attack. Aiden sped through the track alone, victorious, and the crowd began to applaud.

"This is a video game in the real world," Sofman said over the applause.

Polygon spoke with Sofman this week about his company, its lofty goals to lead pack in the consumer robotics industry and why, after years of work in obscurity, Anki chose a real world video game to introduce its work to the world.

Boris Sofman co-founded Anki with Mark Palatucci and Hanns Tappeiner. The three friends met while enrolled in the robotics PhD program at Carnegie Mellon University and became close friends, in part because of their complimentary interests.

"There has been really little innovation in decades."

The trio formed what would eventually become Anki in early 2008 based in part on an observation: Most robotics research and technology was geared toward the agriculture, defense, industrial and space sectors. They identified and targeted a sector that was being largely ignored: consumer products.

Early on in the partnership, they decided that entertainment should be their first focus. Within that broad category, they decided to focus on cars because of their inherently broad allure.

Over the next few years, Anki set about creating the product that no one would see until mid-2013, based on the belief that there was a vast and untapped potential in the physical consumer space and that an entertainment product was the best way to introduce its technology to the world.

"When you look at physical entertainment and its history, there has been really little innovation in decades, pretty much, in what you could do," he said. "We decided to try and use these technologies to find a way to make it possible to have gameplay in the physical world with physical characters that was closer to a video game than anything that was possible physically until then."

Anki spent the bulk of its first five years developing what Sofman called the "core capabilities" that underlie Anki Drive, which he and his partner demonstrated at WWDC.

"From a technical standpoint, what we really have is a video game inside an iOS device that matches the physical world," he said. "What you saw onstage was one iPhone. It was simultaneously coordinating all four of those cars. The iPhone becomes not just the controller but the brains behind the entire experience."

Though Anki is not yet discussing gameplay details, Sofman said that this architecture allows the company to create an "ecosystem" built around numerous cars and iOS devices that control multiple cars. Those not under player control will "come to life" and serve as AI opponents controlled by the software that runs the game. In that sense, Anki Drive can serve as a platform continually updated through software.

To hear Sofman's explanation, what Anki is doing isn't all that different than what video game developers do when they program AI. It's relatively simple, at least on a conceptual level.

"Essentially all we're doing — well, not all we're doing," he said, "is using robotics ... specific combinations of sensors, components, algorithms and technologies to solve all of these problems related to the physical world and what's left behind is a video game that we're programming in a form factor that nobody's ever seen before."

The three founders are all fans of video games, a development discipline that Sofman said overlaps the AI and robotics fields. Recognizing video games' importance, Anki brought in advisers and employees from companies like BioWare, Electronic Arts, Linden Lab and Sony over the course of Anki Drive's development.

"The entire field of robotics is about understanding the real world and dealing with the uncertainties that come with it."

Of course, the real world offers challenges that pristine digital worlds circumvent. A video game with remote control cars, for example, doesn't have to take into account the real world dust that accumulates on the wheels of cars like Aiden or account for the effects they have on performance. That's an area where the robotics backgrounds of Anki's founders became invaluable.

"The entire field of robotics is about understanding the real world and dealing with the uncertainties that come with it," Sofman said. "It's really about taking physical things and being able to understand what's going on so you can program them in software."

Solving these problems for NASA is significantly less constrained than solving them for the consumer space, though. Because Anki Drive is a consumer product, Anki has to balance the precision needed to make the cars work while using affordable components. Anki can't put the kind of "$30,000 sensor" under Aiden's hood that other robotics fields have access to.

To understand the constraints Anki had to deal with, you also have to understand how the product works. Anki Drive's cars use the mat Sofman unfurled onstage at WWDC to determine their position and move with precision around the track.

But a car with relatively inexpensive parts and simple motors that are subject to the inconsistencies of mass production presents a particularly daunting challenge that Anki solves with software.

"So, what we actually have," he said, "is a really sophisticated control algorithm onboard the car that, 500 times per second, uses the information that it gathers from its positioning system in order to make minor adjustments to each wheel in order to actually get these trajectories really precisely and actually be able to deal with lift and drift and all of the realities of physics that comes with the real world."

Anki's solution is born of practicality and also explains the five-year development process. Increasing the capabilities of the software allows Anki to account for dust, drift and the inherent ambiguity of hardware within what Sofman said are some remarkable tolerances.

"We're kind of geeks at heart," he said. "We actually did the math on how precisely and how quickly these cars can drive. If you were to take one of the cars that comes with Anki Drive and you were to scale it up to real world size, it'd be the equivalent of you driving down the 101 at 250 mph with a concrete wall on either side of your car a tenth of an inch from either of your mirrors."

That relative tolerance and its five-year development cycle will be available to consumers when Anki Drive is released this fall exclusively in Apple retail stores and at Apple.com. The company was already in discussions with Apple's retail division when it got the call about WWDC that would introduce its technology to the world.

"First of all, it was an incredible honor," Sofman said . "We're still pinching ourselves. You can only dream of announcing your company like that. We'd been working on it for five years, and we've been completely under the radar and [had] not said a single thing publicly for all that time. It was quite an amazing way to poke our heads out into the world." 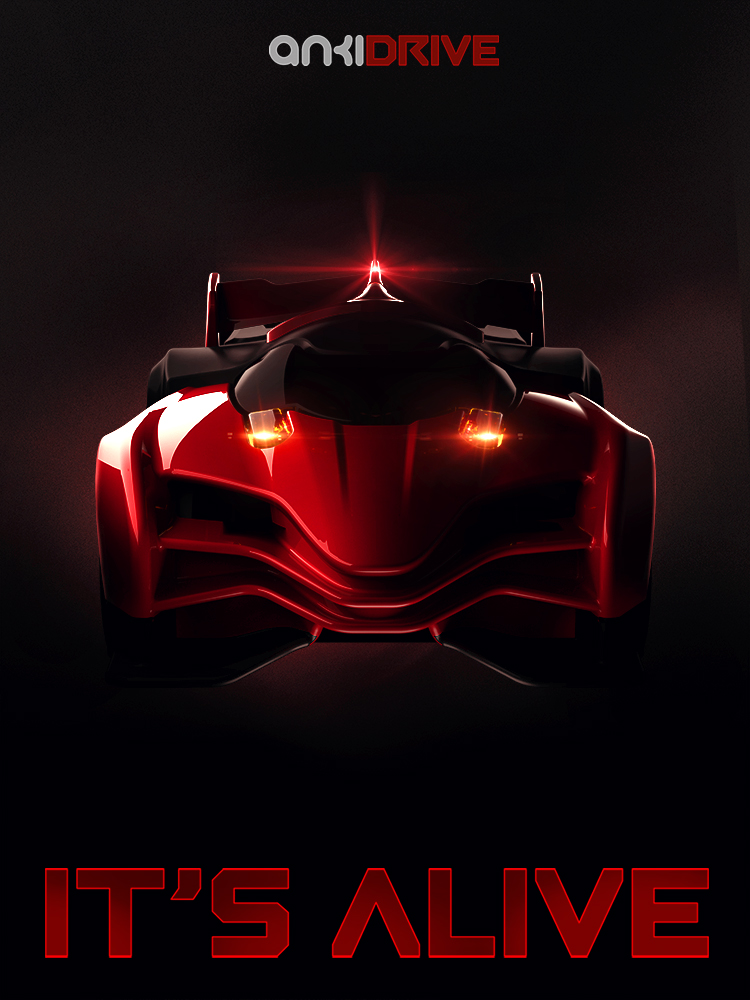 As excited as Sofman obviously is about Anki Drive, it's also clear that this is just the first step for a company that hopes to change the world through robotics and AI applications for consumers. Anki is already looking at its next products, which will be built upon the technology created for Anki Drive, for which an introductory version of the app is available in the iOS App Store.

"The thing that's important thing to us as a company is that we always look at Anki as a robotics/hardware/artificial intelligence company more so than a toy or video game company," he said. "For us, the longterm vision is about robotics and AI coming into consumers' lives and actually reinventing almost every aspect of how we live, when you think of the sort of impact it can have."

So how do you start a revolution? If you're Anki, you do it with Anki Drive, a video game in the real world that, according to Boris Sofman, is a "really incredible first step in realizing that vision."

How to change Furfrou forms and trims in Pokémon Go