Share All sharing options for: Ultima Online alumni Starr Long reunites with Richard Garriott for Shroud of the Avatar

Richard Garriott credits his new Portalarium teammate Starr Long with one of the most important discoveries in the history of games.

He says Starr, who is being announced today as executive producer of Shroud of the Avatar: Forsaken Virtues, pretty much invented MMOs. Sure, Portalarium founder Garriott has enough respect for the proper forms of gaming's creative narrative to couch that claim in caveats, but the implication is unavoidable.

Starr worked with Garriott on Ultima Online, the first large-scale, commercially successful MMORPG, and the game that set the stage for Everquest, World of Warcraft and all that followed. Garriott says that, although he was the public face of the developer Origin, although he was the one who persuaded Electronic Arts to green-light the risky project, it was Long who had framed the idea in the first place, and who pushed for its acceptance. 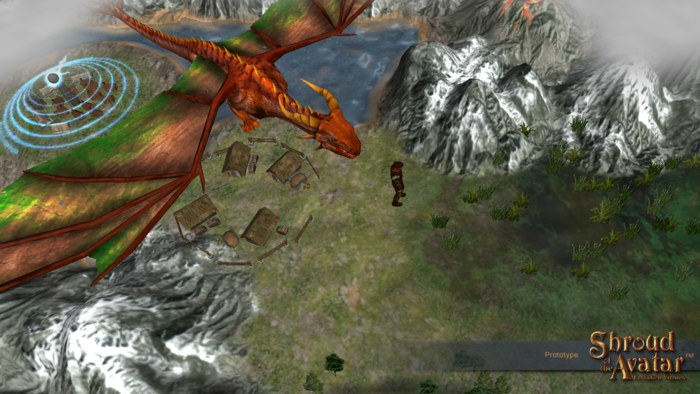 "Even before Starr had come to Origin we had always talked about doing a multiplayer Ultima game," recalls Garriott, the creator of the Ultima series. "We looked at the old dial-up multiplayer games and MUDs and it didn't seem to be a business that was useful at the scale we needed.

"It was really Starr who sat me down and said 'look Richard, the Internet is coming, now is the time.' Though it was often me arguing the case in front of Electronic Arts management it was really Starr's belief that we could pull this off and his insistence that I keep fighting that good battle by which we finally got the game — begrudging shall we say — greenlit by EA. Ultima Online immediately became the fastest selling PC game in Origin and EA history and within two years had outsold all the previous Ultimas combined, several times over."

Shroud of the Avatar was Kickstarted earlier this year and came in with $1.9 million, almost double the initial target. Garriott says this extra money has allowed him to "move forward with confidence" on the project, and that includes bringing Long on board, after a four year stint at Disney, working on titles like Club Penguin and Pirates of the Caribbean Online as executive producer.

At Rooster Teeth Expo in Portalarium's native Austin this weekend, Garriott will officially introduce Long as a new team member while offering the first look at the game in action. "We're showing the real game for the first time," says Garriott. "Previously we've shown proof of concept prototypes with no final code, but everything we are showing this weekend is based on real systems, original art."

He says that rudimentary combat systems will also be shown. "It's simple combat, stand toe-to-toe and hit each other, for now. The more sophisticated combat technically does work but it's not in a good state to show in demo form right now," he said.

Shroud of the Avatar is being touted as the "spiritual successor" to Garriott's Ultima series, which is still owned by EA. He says it's an entirely new kind of RPG, one that can be played solo, or with multiplayer that is designed to favor smaller scale participation heavily skewed towards people the player knows in real life.

For Starr Long, this is one of the big attractions of the project. "I like being on frontiers," he says. "We were on a frontier with Ultima Online and we are again with Shroud of the Avatar. I'm really excited by the selective multiplayer aspect of the game, where we determine who is visible to you based on your friends are outside of the game. It's an interesting concept to play with."

Long offers an anecdote about an old friend with whom he used to play pen-and-paper games back in the day. "We still join any new MMOs and play them together," he says. "It's great because we know each other's play-styles so well, and it's an opportunity for us to chat and catch-up, which can also be a distraction in the game, of course." 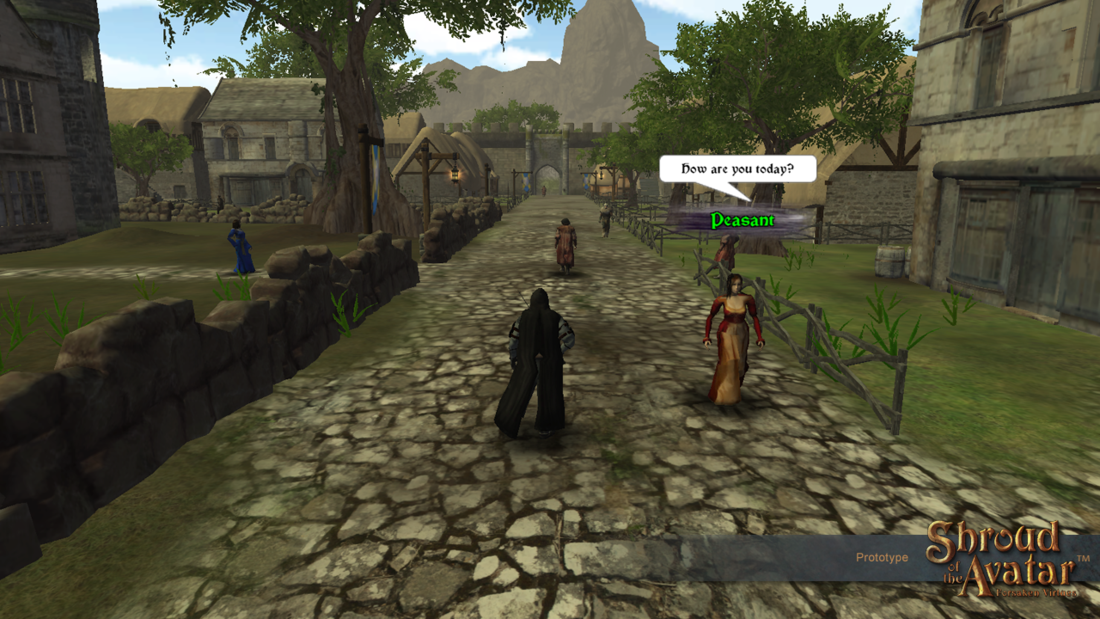 Long and Garriott believe that the future of role-playing is based on a single-world, where the game works hard to connect players with one another. "You can definitely make really deep connection to strangers in these virtual worlds," says Long. "But there is something exciting and compelling about facilitating these things with people who are really already connected to in the real world."

"In this new era we have very good ways of mapping people's friends lists," says Garriott. "We have good ways to understand who the people are that you care about." He stressed that the game would not pester people. Players can opt-in to join the world inhabited by their friends. When friends are not available in multiplayer mode, people with similar profiles are preferred, followed by strangers.

His vision for game design was very powerful

Multiplayer in Shroud of the Avatar will be less crowded than in traditional MMOs, but that's not the only difference. Garriott says most MMOs rely too much on fencing players in according to their level, as well as endless grinding and a primary focus on combat.

"They have fallen prey to a high level of complexity coupled with a high level of handholding to get you through that complexity," he says, citing directional arrows and exclamation marks over mission-givers' heads. "It's taken away the sense of exploration and discovery that was so powerful in earlier role playing games." 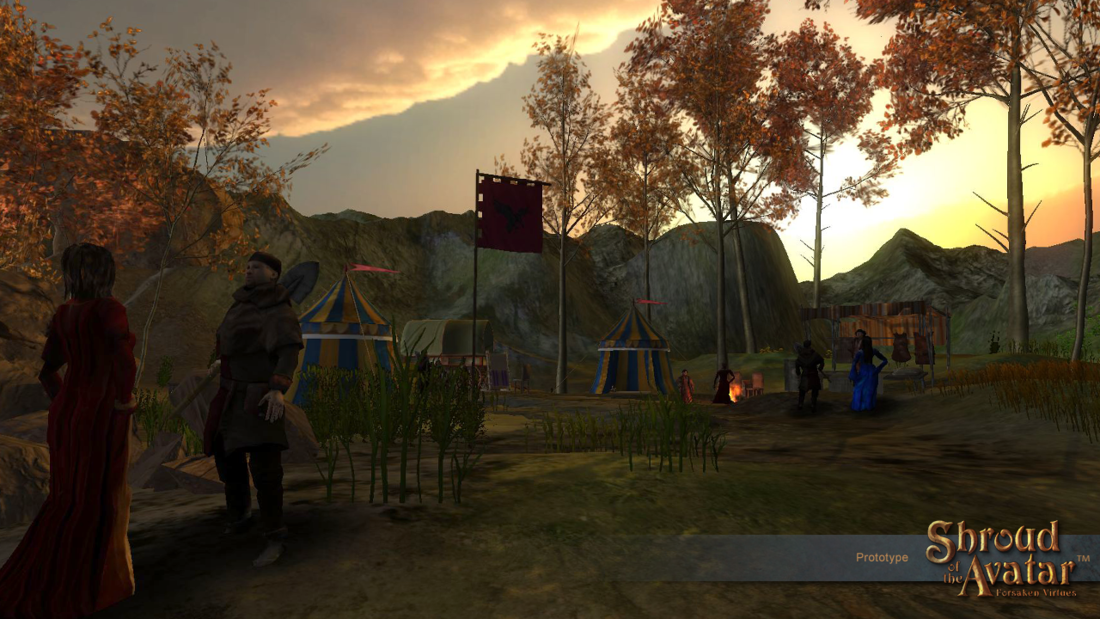 In the years after Ultima Online, Garriott and Long worked together on the ill-fated Tabula Rasa project, but they're clearly happy to be reunited once again. "His ability to be creative is amazing," says Long on Garriott. "His dedication to making it a real, believable world in every detail. Also, he treats everyone on the team as an equal, everyone contributes to the project."

Garriott recalls Long joining Origin as a QA tester. "When someone joins a growing organization the star performers really rise fast," he says. "He very quickly moved up to team leadership and then design and production within development teams. He did that in just a few years, one of the fastest rises I've seen in the industry. It was obvious from the beginning that his vision for game design was very powerful especially as it related to Ultima, which of course I have a lot of strong opinions about. He understood that and pushed me beyond my comfort zones to tackle more than what I would have conceived."

For more on Shroud of the Avatar check out our in-depth interview and on-camera conversation with Richard Garriott.