UnderTale is a traditional role-playing game with one very big exception: Where most developers incorporate violence into gameplay, creator Toby Fox tries to work around it.

UnderTale takes place in a world where humans and monsters once coexisted peacefully. After war tore the two races apart, the monsters were sealed underground; the game begins shortly after a child tumbles through a great hole and into a monster-filled domain. Fox set out to make a title that relies on interaction and choice to tell a story. Now on Kickstarter, UnderTale is billed as a game "where no one has to get hurt."

The ability to take out enemies with an effortless click still exists but so do alternate options. Want to befriend a boss you've encountered? Try talking to him. Instead of attacking or fleeing, select the game's option for mercy, and spare your foes. Fox told Polygon that he's attempting to teach players something new.

"What's the point of killing something?"

"What's the point of killing something?" Fox said. "What kind of lesson is that giving players and kids that play the game? I think that we can develop more games that show that there are non-violent ways of dealing with conflicts and that teach people to be friendlier."

Fox is tired of the typical RPG battle formula of pressing a single button in different combinations. You attack. They attack. Someone dies. There's little variation in between, Fox said, aside from different graphics or elemental attacks.

"It's just feeding this idea that the most fun thing is to have your [stats] go up." Fox said. "I don't think concentrating on [stat] numbers or killing things is a plot excuse." 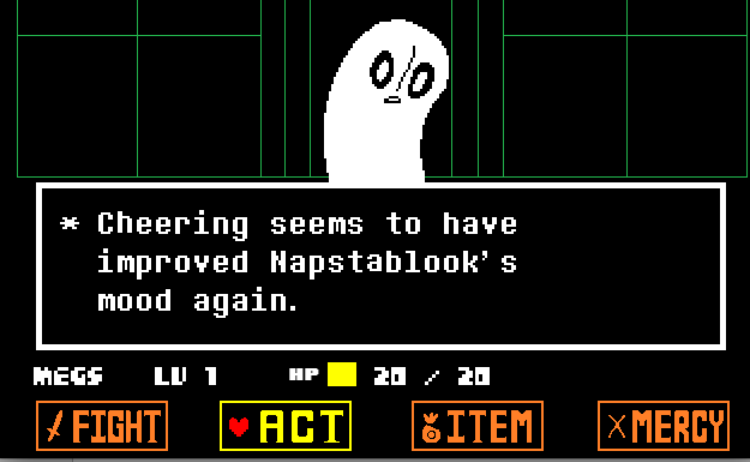 Battles in UnderTale have a distinct approach. When players chose to fight, they'll time their own attacks to a meter, and dodge enemy onslaughts in a brief, Galaga-style mini-game.

The game's battle system achieves a new level of depth through its interaction system. Fox wants players to think about what they're doing. He wants them to care.

When players engage with monsters by talking, complimenting or consoling them, enemies begin to reveal individual personalities. A skittish foe called Whimsun is "too sensitive" to fight and will flee from battle when you try to console it. Another ghostly boss is simply depressed and needs to hear a joke or two; after you've cheered it up, the boss will let you pass without trouble. Once you know your enemies, it's more difficult to attack them.

"It was my intention to make some people feel guilty, though I've been really surprised at the speed and extent of the guilt those players feel," Fox said. "I figured most people would happily kill monsters if it meant getting EXP rather than leaving them alone for no prize whatsoever. That hasn't been the case."

"To kill or not to kill is really not a choice for most people ... but just having the choice is important."

Guilty or not, Fox is still pleased to see the occasional player who chooses to take down enemies without batting an eye.

"To kill or not to kill is really not a choice for most people," Fox said. "It's predetermined by their personality. But just having the choice is important. Otherwise people would never feel guilty, and you should feel guilty. It was your fault, after all."

With a modest goal of $5,000, UnderTale's campaign achieved its funding target shortly after launch. Fox said he doesn't know how much the game will raise, but he will continue to extend its stretch goals as needed. His aim is not to create a massive game in need of hundreds of thousands of dollars but a short, tight experience. The game's demo, which is available via Kickstarter, accounts for about 25 percent of its content.

UnderTale ends funding on July 24. The game is currently being developed for Windows PC and Mac and will be released in summer 2014.