Nicolas Badila is a 14-year-old video game designer from Atlanta, Ga. who represents the educational aspirations of the Obama administration, which has committed billions of dollars to teaching kids science, technology, engineering and mathematics (STEM).

Badila is one of the winners of the third annual National STEM Video Games Challenge, which today rewarded 14 kids from 6th to 12th grade for their game design submissions. All the games sought to offer some educational benefit. Most were created using basic game creation platforms.

Stemville, which Badila started work on in January and submitted in June, is an open world Construct 2 game in which players run errands and complete tasks in order to pay for a house. "It teaches kids that math and other educational skills are used outside of school," he told Polygon. "Kids learn through a fun game where they can interact with fun characters."

Other winning games like Little Green Planet (pictured above) by 12th grader Janice Tran focus on environmental issues and there are many that deliver lessons on physics and mathematics, like Math Rocks by 6th grader Nicholas Cameron (pictured below). The 14 winners of the contest were selected from 4,000 entries, and all receive a laptop with extra cash prizes of $2,000 for themselves or their sponsor organization. 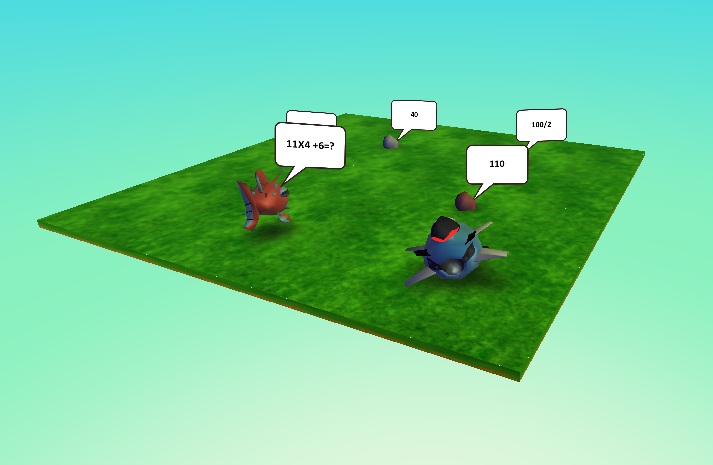 For Nicolas Badila, it's all part of the plan. He aims to set up a game development company in the next year followed by college to learn robotics, engineering and computer science.

The contest was inspired by President Obama's 'Educate to Innovate' program. Three winners from last year's contest were invited to participate in the White House Science Fair project in April. "One of the things that I've been focused on as President is how we create an all-hands-on-deck approach to science, technology, engineering, and math," said Obama. "We need to make this a priority to train an army of new teachers in these subject areas, and to make sure that all of us as a country are lifting up these subjects for the respect that they deserve."

Microsoft was one of the companies sponsoring the contest. According to principal researcher Curtis Wong, making games is one of the smartest ways for kids to learn. "It's really important for kids to develop a mental model of something and making games help," he told Polygon. "What do they want the player to learn? The process of that thinking helps them understand the domain a lot more than if they were just playing it themselves."

Badila says his own math skills improved as he tested the game and he says he bolted on some abilities in "algebra and more creative algorithm thinking." You can get a more detailed look at the winners' entries here.