Share All sharing options for: Miyamoto reveals hidden memos in Pikmin 3 lead to a secret code

Hidden memos scattered across Pikmin 3 will combine to reveal a secret code, Nintendo honcho Shigeru Miyamoto announced in a post on Miiverse.

According to Miyamoto, numbers contained in the memos form a code that players can access once they collect 10 of the hidden items. It isn't clear what this code actually unlocks; however, Miyamoto added "I'll be in touch again to explain how to use the code, so be sure to make a note of it once you have it." 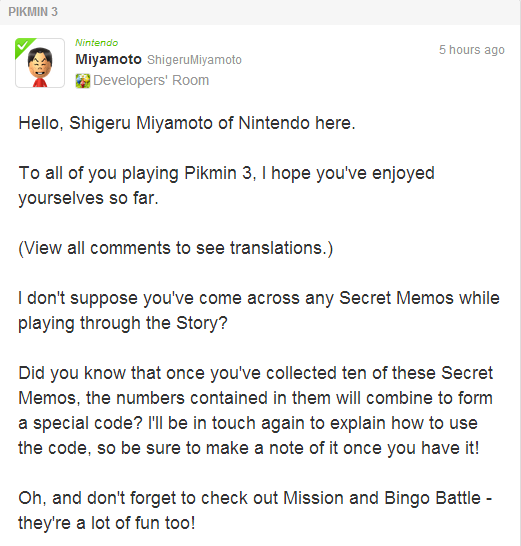 Pikmin 3 received an 8 out of 10 review from Polygon. "Pikmin 3 isn't perfect," it reads. "It's not as polished, responsive or tightly-designed as the average Nintendo game. But these issues are never bad enough to derail it entirely. Even in its third incarnation, Pikmin's sense of discovery outweighs any control annoyances it may have and provides a charming variety that the Wii U has sorely lacked. Being different counts for a lot."