'The Mario Opera' returns for one night, and maybe more

By Samit Sarkar@SamitSarkar Aug 10, 2013, 9:00am EDT
Image Opus Moreschi on Flickr and Gameifesto

Share All sharing options for: 'The Mario Opera' returns for one night, and maybe more

Singer-songwriter Jonathan Mann has attained a certain degree of fame for his "Song A Day" project, through which he's written a new song every day since January 2009 and posted videos of them to his YouTube channel; he's coming up on 1,700 days and 1,700 songs — and 12 million total views. Mann's Song A Day tunes have gotten him featured on CNN, G4 and The Rachel Maddow Show, and in an iPhone 4 press conference, but there's something else for which people know him even better.

"My Song A Day thing has gotten pretty big," said Mann in a phone interview with Polygon earlier this week, "but the thing that I get recognized the most for on the street randomly is The Mario Opera. People will be like, 'Oh, you're the guy that made The Mario Opera,' and [I'll be] like, 'Yep.' And that's really strange to me, but that's what it is."

The Mario Opera originated in 2005 as a thesis project for Mann, who was working on a Master of Fine Arts degree at the California Institute of the Arts. Mann and his cohorts ended up performing the opera (or technically, operetta — more musical theater than opera, really) in the Los Angeles area at least 30 times over the course of a year and a half. But he eventually got burned out on it, and because of licensing concerns, it never seemed like he'd be able to make any money performing it.

Eight years later, thanks to a fortuitous set of circumstances, Mann is performing a stripped-down version of the show Aug. 17 in New York City, his new home; he moved here from Berkeley, Calif., two years ago. It's a one-time deal, at least for now. But Mann is hoping that this one-night-only revival will lead to more.

"This is way out of my world. Even back then it was, and it sort of still is," said Mann, speaking about his relative inexperience with musical theater. But games gave him an idea for his thesis project.

Mann loved playing video games such as the Super Mario Bros. series as a child in the late '80s, but moved away from games in his teenage years. It wasn't until college and especially graduate school that he fell back in love with games, particularly retro games.

"I was getting the sense that somebody was going to [...] come and take these old video games and make them into some kind of stage thing," he said. "I knew that was going to happen, and I really wanted to be one of the first to bring that to life."

Back in 2005, he had begun listening to music from Super Mario games on his iPod, and doing so inspired him to write songs based on that memorable Mario score by Koji Kondo. "I did that with a couple of different songs," said Mann, "and then I realized that I could make it into something bigger — I could sort of make it into a rock opera that tells Mario's story through the familiar songs and with a sort of modern twist on the story."

the premise of The Mario Opera: "what if Mario became self-aware?"

The basic premise of The Mario Opera, as Mann put it, is "what if Mario became self-aware?" Mario Mario — the script refers to him by his purported full name — is a plumber in Brooklyn who enters a pipe to go underground and marry Princess Peach. But Bowser kidnaps Peach, and over the course of the operetta's first act, Mario realizes he's a video game character who has attempted to save the Princess countless times. This causes him to grapple with an existential crisis — a fight he appears to lose when he dies in a battle with Magikoopa, whom the story calls the Lizard Wizard (for rhyming purposes, of course).

That was the first of three planned acts, and by the end of The Mario Opera's original run in Los Angeles, the shows included the first two acts. However, said Mann, "I still haven't finished the dang thing."

When Mann moved to New York, he figured that since the city was the heart of the theater world, he might be able to bring back The Mario Opera. But he was working on other things and didn't put much energy into it. Then fate intervened, with his Song A Day project — which was well under way by then — serving as the catalyst. 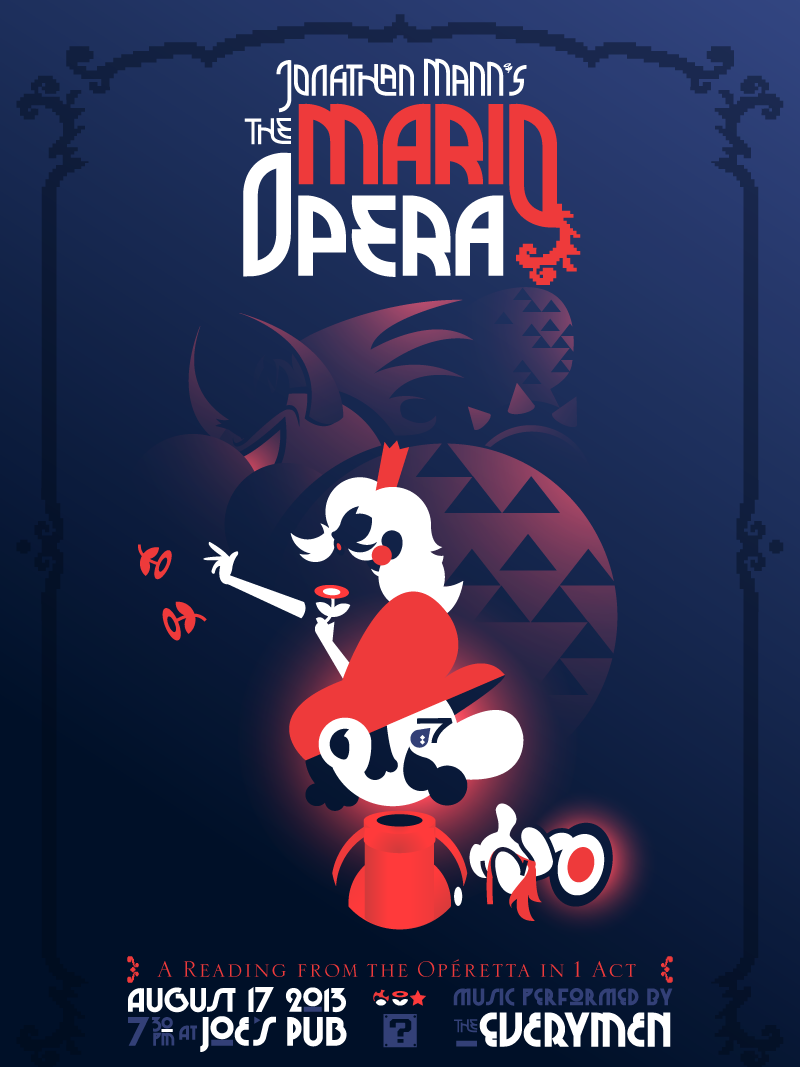 This past March, Mann decided to write one of his daily songs about the Accidental Tech Podcast, one of his favorites. The podcast adopted Mann's song as its theme, and when a "sort of off-Broadway producer guy" heard it on the podcast, he hired Mann for a musical. Then he looked at Mann's bio, and saw The Mario Opera listed there.

"It turns out that he's a huge Mario fan — like, a ginormous theater nerd, but also just [an] equally big Mario nerd," said Mann.

The producer listened to the opera — Mann released the first act's songs as an album, and recorded demos for the other two acts — and was able to book a show for this month. "It was very fortuitous and it just sort of came out of my desire to show my love for this podcast, basically," Mann said.

Mann calls the upcoming show a "stage reading" to distinguish it from The Mario Opera's original incarnation. Still, the event will feature actors in costume; a live band, The Everymen; a visual accompaniment from graphic designer and game developer Colin Snyder; and some stage elements. "It definitely will not be the full-on production that it was, but it'll be basically like a staged concert, and give people a real sense of what the full thing can be," Mann explained.

The show will also differ from the 2005 production in content, since Mann is older and wiser. "I'm 31 now; I was 23, 24 when I wrote it," he said. "I think anybody who's making stuff looks back at the stuff that they made when they were younger and kind of cringes a little bit. [...] So I sort of see this as a strange conversation with my 23-year-old self." Back then, said Mann, "I was trying to be really fancy," whereas now, "a lot of the fanciness, the fancy-pantsiness, I'm kind of over it."

The "express goal" of this one-night revival of an eight-year-old show, according to Mann, is to get someone to sign on for a production run. "My original goal still stands: I would love to have it be a long-running thing that happens, that people can come see and geek out and get nostalgic about the old days," said Mann.

Of course, there's still the same major roadblock to that: The Mario Opera isn't exactly a Nintendo-sanctioned affair. As Mann understands it, the written portion of the opera — the characters and story — is fine because it can be classified as a parody. But because Mann's songs are based on Koji Kondo's original score, he would likely need to license the music from Nintendo for a professional production.

"I have not heard from anybody on this go-round," said Mann. "Back in the day, I heard from a guy at Nintendo of America who, I guess, came across it and really loved it. And his advice was, like, 'Just do it as long as you can. You would need to get Nintendo of Japan's permission,' and he seemed to think that that was probably not going to happen."

Mann said he's surprised that in the intervening years, nobody else has attempted to do something akin to his opera, even in spite of the licensing issues. So for now, The Mario Opera remains a one-of-a-kind adaptation of a beloved video game franchise. Mario fans can check out the revival Saturday, Aug. 17, at Joe's Pub in downtown Manhattan. The show begins at 7:30 p.m., and tickets are available for $15.