The Splinter Cell series has evolved from game to game in search of new audiences, but Ubisoft and its various teams have inevitably made trade-offs to that end. The most obvious example is Splinter Cell: Conviction, which took the series in a decidedly more action-oriented direction, alienating fans who found somewhat more cerebral stealth-action nirvana in 2005’s Splinter Cell: Chaos Theory.

New developer Ubisoft Toronto wants it all with Splinter Cell: Blacklist. The team created a game that purports to allow any player of any other Splinter Cell game, and even total newcomers to the series, into the night-vision-powered world of series protagonist Sam Fisher.

The surprise? With smart, open-ended level design, an inspired upgrade system and remarkably refined co-op and multiplayer, they’ve pulled it off. 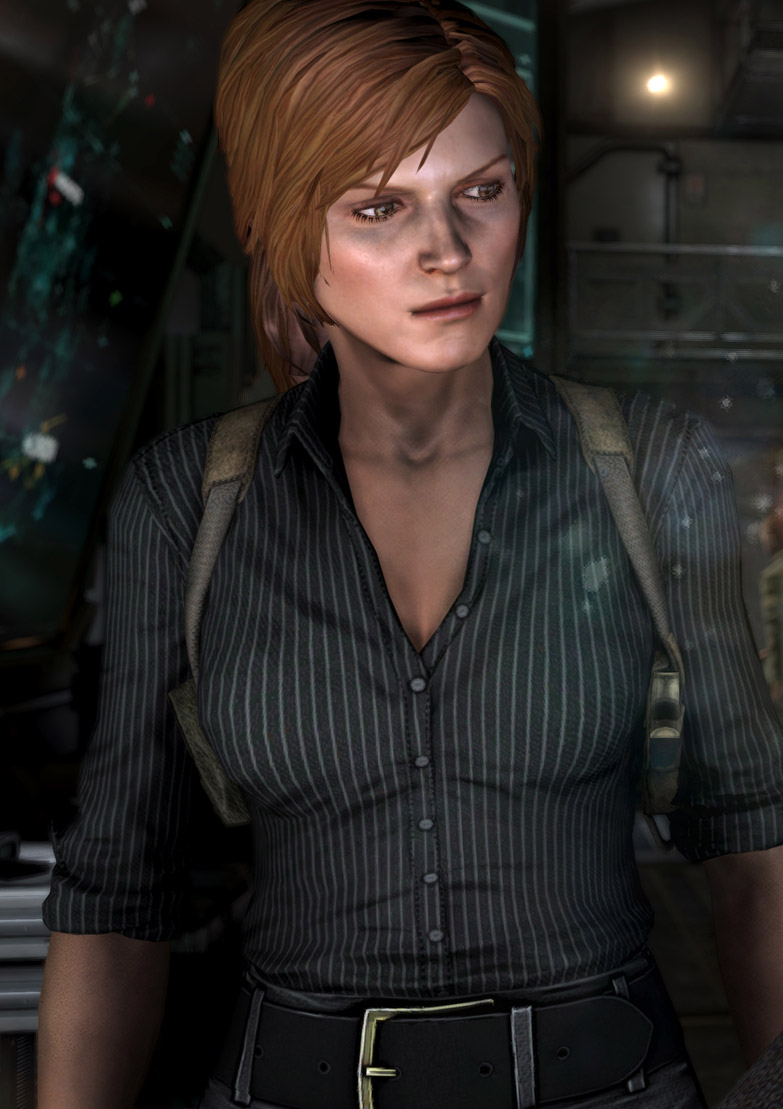 Blacklist opens with terrorist group the Engineers threatening American interests with a series of attacks. After an attack in Guam that — wait for it — makes things personal, veteran spy Sam Fisher is recalled to duty by the President and put in charge of the newly formed Fourth Echelon. Given command of a team and a virtual blank check, Sam has to stop the Engineers’ plan and figure out their real motivations. 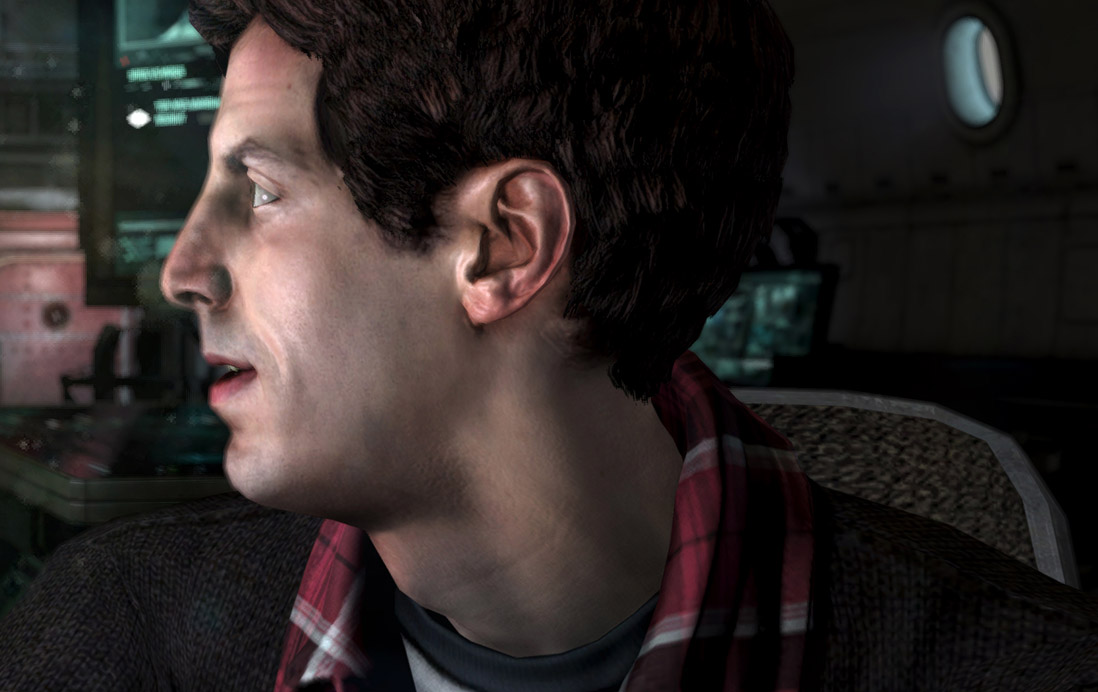 While Blacklist continues the series’ bent towards globe-spanning conspiracy, the story hits much closer to home than it has before. Previous games in the series seemed to have their finger on the pulse of future geopolitical intrigue, but Ubisoft Toronto’s first shot is alarmingly current. Fourth Echelon is a secret, off-the-books branch of the US National Security Agency, operating clandestinely and operating of its own accord with next to no official oversight.

Amidst very public real-world discussions of over-reaching government surveillance and unchecked, unsupervised military and intelligence agency operations, the story of a team given carte blanche to do almost anything "for the greater good" is … well, a little weird.

Splinter Cell: Blacklist’s story does avoid most of the easy terrorist bad guy tropes, and there is something to say buried under all the techno-political milspeak wonkery. The problems and characters are sympathetic to a point but wandering through the streets of Benghazi and some of the most controversy-laden locations of the modern news cycle, I had a hard time distinguishing where inspiration ended and exploitation began.

It would have likely been easier to reconcile the mix of emotions that Blacklist stirred when it wandered into real-world complications if its story managed to hold it together through the end. The game forces some major logical and intuitive leaps by the time it's through and one major, unresolved red herring still has me a bit thrown off.

But Blacklist’s story does contribute to what I hardly believed was possible. The various twists and turns around the world manage to set up levels that feel equally inspired by every Splinter Cell game, and still manages to present a cohesive set of mechanics and design choices.

At its basic foundation, Splinter Cell: Blacklist is driven by stealth gameplay. You control your character from a third-person perspective, navigating levels and completing various objectives. Enemies patrol and search, and you can use shadows and the environment to avoid them and get where you need to go.

This formula has been added to over the years and in particular, more and more options for direct confrontation have been added. In that respect, Blacklist isn’t a step backwards. There are just as many means of killing here as there have ever been. But Blacklist’s environmental traversal, fluidity and grace with which you can avoid enemies and get around has been improved considerably. The clunkiness of previous games is mostly gone — mostly being the keyword — and just moving Sam around is a lot of fun regardless of your tactics. But beyond the basic fundamentals, there are an awful lot of strategies available to you.

Blacklist is driven by stealth gameplay. 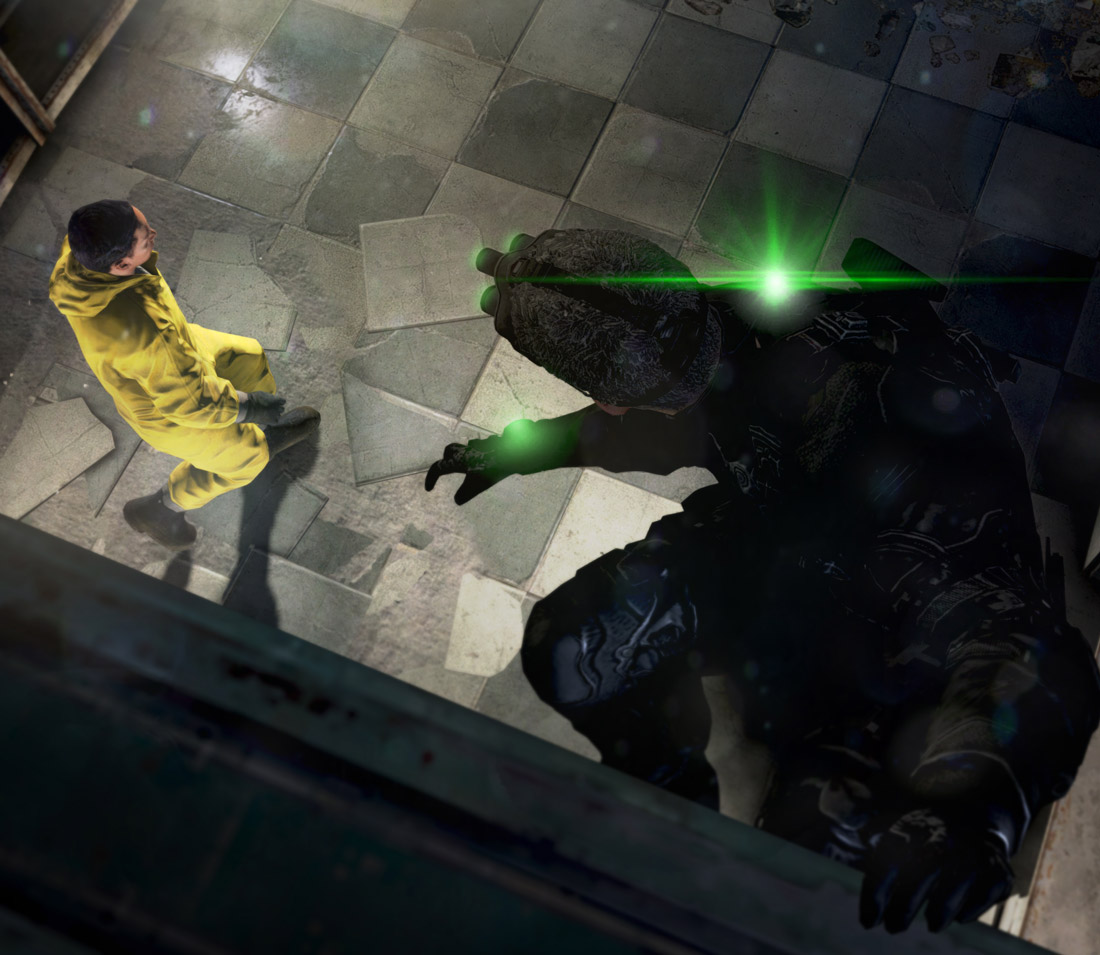 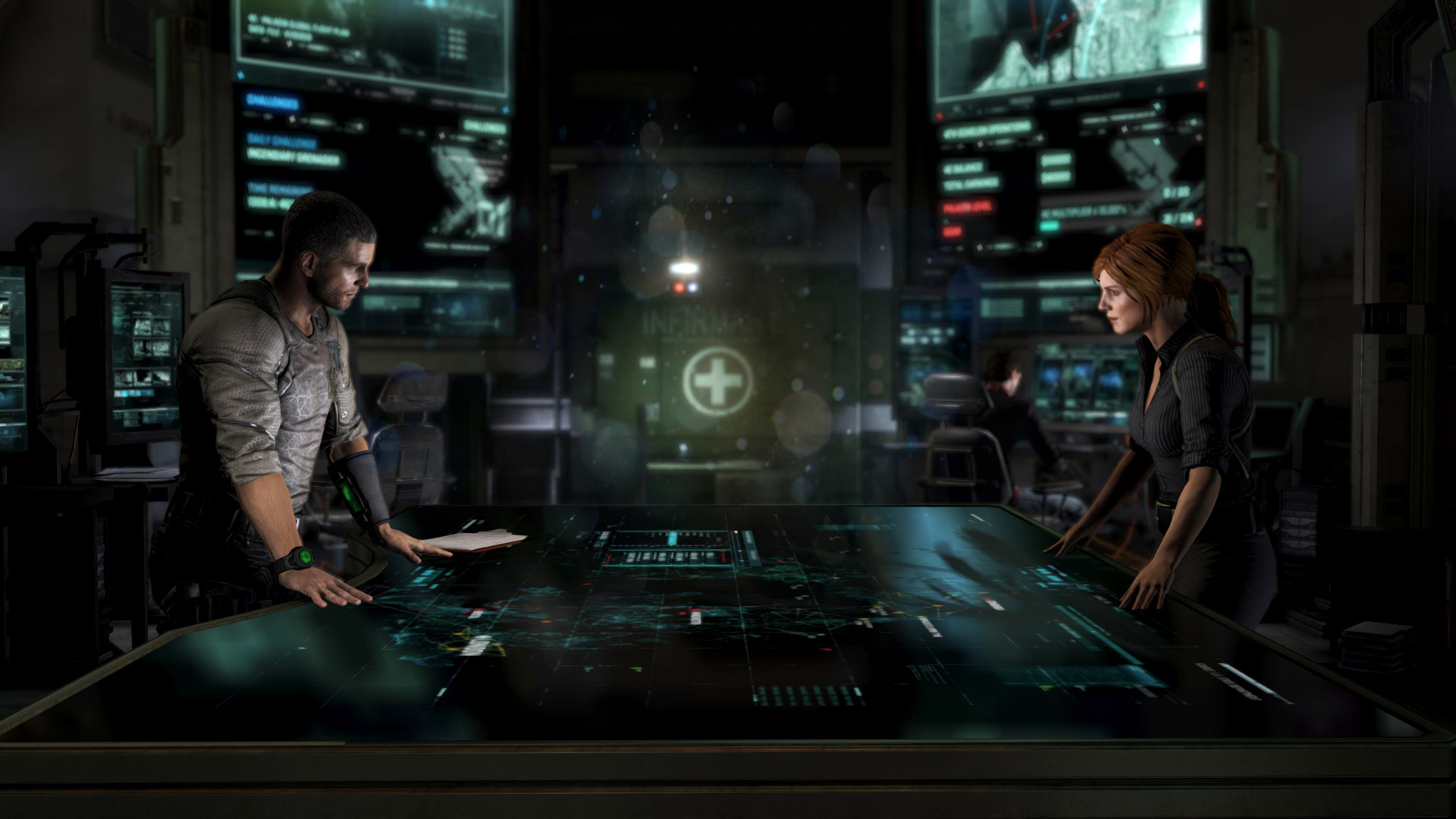 Old-school Splinter Cell fans will likely celebrate the return of the sort of level design and challenge that the series last delivered so well in Splinter Cell: Chaos Theory, but there’s one big change it will probably be hard for them to get behind: Michael Ironside, the voice of Sam Fisher from previous games, has been replaced by actor Eric Johnson.

If you’re a Splinter Cell regular, the change is jarring — Johnson does a serviceable job sounding gruff and grizzled, but the presence that Ironsides established over the course of the other games is largely gone. I’m not one to lament change, and the reasoning behind replacing Ironside is understandable, but having played every other game in the series, I never really got used to it. This also applied — albeit to a lesser degree — with Kate Drummond, the new voice for series regular Anna Grimsdottir.

Blacklist is somewhat heavy-handed in its breakdown of "styles." Pure stealth tactics — avoidance, keeping to the shadows, leaving as little of a trace as possible — are classified as "Ghost" play, while murderous subterfuge and all-out murder are labeled as "Panther" and "Assault" respectively. These three styles form a sort of Venn diagram of Splinter Cell gameplay, with Conviction’s various degrees of gun-driven predator style on one side and every Splinter Cell before it on the other. But as someone who’s played every Splinter Cell game to completion, it’s clear that a return to form for stealth players was a huge priority.

every mission can be cleared without firing a shot

Every mission can be cleared without firing a shot, but there are also multiple means of clearing each section without being seen or detected. Sneaking around levels as a ghost player — killing no one and avoiding as much conflict as possible — I saw all the different ways I could tackle the challenges in front of me differently, with or without force. 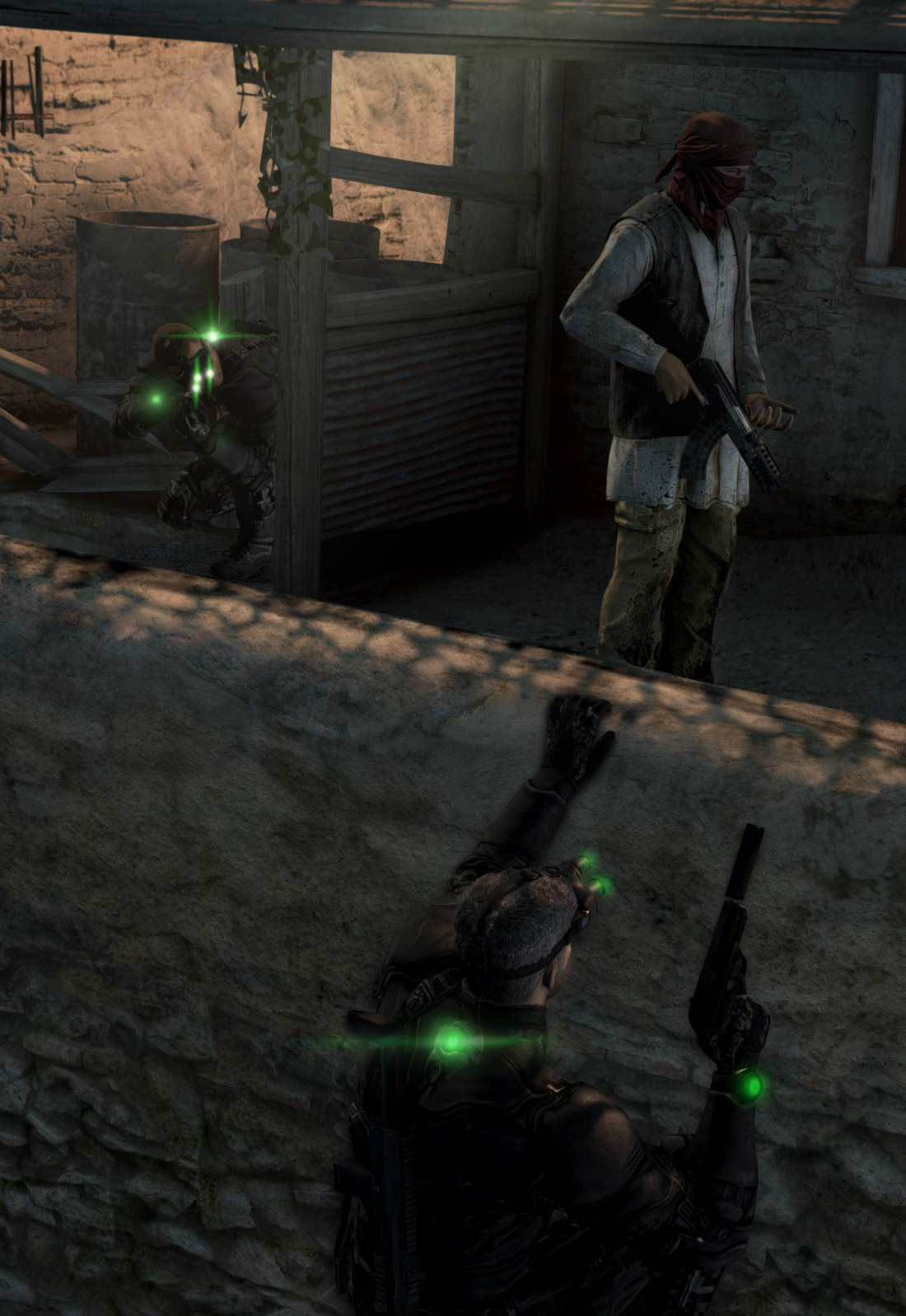 I appreciated that Splinter Cell: Blacklist provided me with nearly as many means of circumventing conflict or non-lethally taking out enemies as it did weapons to dispatch them — and the scoring system actively rewards taking the moral high-road, despite the exponential increase in difficulty playing that way. While it was nice to see points rewarded for knocking out enemies undetected, I felt like an absolute badass sneaking past every guard and being rewarded even more for the trouble.

These points are multiplied at the end of each mission to calculate your monetary reward, which in turn can be used to upgrade your gear and your airborne base of operations, the Paladin. Even upgrades require a choice — there are two "trees" of sorts for gear, leaning toward protection/weapon usage and stealth. The former makes firefights a more survivable option, while the latter leaves you fragile — but also makes you much harder to see.

While you could mix and match gear types to result in well-rounded Sam, it always seemed like a better idea to pick a playstyle and support it with my gear choices. This combines to provide Blacklist with a sense of personal identity and progression. I felt a real sense of ownership of my Sam.

This identity carries over into the various co-op missions throughout Splinter Cell: Blacklist. While these optional missions are also playable solo, they’re clearly designed for two players, and are much more fun in concert. Splinter Cell already plays like nothing else out there. With another person, it’s one of the coolest, most unique co-op modes around, and I was surprised at the sheer number of missions available.

Across both the main campaign and co-op, Blacklist demonstrates a great degree of accessibility. While the complicated stealth ecosystem of older games has returned, there’s room for freeform experimentation, and even a little guns-blazing ass-covering if necessary. But that accessibility is hard to come by in Spies vs Mercs, Blacklist’s competitive asymmetric multiplayer.

This isn’t to say that Spies vs. Mercs is bad. In fact, it’s great. The setup is as inspired as it ever was: one team plays as spies, working to complete spy-style objectives like securing data. The other team assumes the role of mercenary soldiers from a first-person perspective. Both sides use gadgets and their very specific skill sets and play completely differently.

I enjoyed the hell out of the complicated interplay between the different skillsets. Spies vs. Mercs has been expanded from previous games to include eight-player objective-based games and a mixed team deathmatch mode that sounds like a terrible idea yet somehow works fantastically well.

But there’s an amount of finesse and strategy that goes beyond the basic run and gun of other multiplayer titles. And Blacklist doesn’t do much to ease players into those systems, unless you count the campaign. I worry that the playerbase Blacklist will need for multiplayer to find traction might not stick around.

Behind the new coat of paint and a new Sam Fisher, Blacklist represents a return to form for the series. It doesnât revolutionize Splinter Cell, but it manages a sharp trifecta of achievements â itâs open to new players, accessible to players from the series' major departure installment and a welcome invitation back to series regulars who missed the stealth focus that peaked with Splinter Cell: Chaos Theory. Blacklist refines what came before and makes for a great new beginning for the series.