Call of Duty: Ghosts multiplayer hands-on: familiar, but fun, and full of twists and turns

Share All sharing options for: Call of Duty: Ghosts multiplayer hands-on: familiar, but fun, and full of twists and turns

Call of Duty: Ghosts takes players to a new world, separate from the Modern Warfare and Black Ops franchises, unshackled from their fiction and expectations. It's an experience meant to stand on its own, a war game with modern and futuristic technology. It's the first Call of Duty game for next-generation consoles, specifically the Xbox One and PlayStation 4.

It is also clearly a familiar Call of Duty experience, particularly in the multiplayer mode that Activision spectacularly and loudly unveiled publicly for the first time today. Playing the fast-paced, 60 frames-per-second multiplayer modes of Ghosts is not unlike riding a bike. It's just so easy to settle into the pleasurable gameplay loop of killing people, capturing flags and blowing things up.

That's not meant to be taken as a dismissal. Crafting a still-compelling multiplayer mode on an annual basis that lasts millions of players a year or more of gameplay is no mean feat. Call of Duty: Ghosts multiplayer is still as fun as its been for the past five-plus years.

It may be iterative in nature, but Infinity Ward is still capable of delivering what Activision Publishing president Eric Hirshberg calls "adrenalized, competitive, over-the-top, thrill-ride-with-your-hair-on-fire fun," based on our hands-on time with Ghosts' multiplayer. Yes, playing Call of Duty against others is still a hell of a lot of fun, as violent pop entertainment goes.

The most obvious difference coming with Call of Duty: Ghosts is its level of graphical fidelity. Infinity Ward and Activision showcased the Xbox One and Windows PC version of the game at its multiplayer reveal event today, and the leap from current-generation Call of Duty games was immediately apparent.

Initially, it was downright distracting. With the leap in fidelity, there's simply more visual information to process than before. Infinity Ward is taking advantage of the horsepower of next-gen systems by adding more detailed textures and realistic lighting effects. In a game like Call of Duty, which runs at a blistering pace, that extra detail can make it harder to spot friends and foes. It's something Infinity Ward is conscious of, said executive producer Mark Rubin.

"When you start to add so much graphical fidelity in maps," he said, "visibility becomes an issue, and we had that problem." In some maps, the sun on the horizon might obscure a player's vision, for example. That may be a tactical consideration another player could exploit. Maybe that's fair game. Maybe it's not. Rubin said that, as of about a month ago, Infinity Ward started reviewing all of Ghosts' multiplayer maps for such issues and began "scaling back in certain areas to make sure the gameplay is paramount, that it's properly balanced."

Call of Duty: Ghosts' maps have also changed in a way that will undeniably affect gameplay by design. The very terrain of maps can be altered during dynamics events. In the Las Vegas-set map Octane, players can blow up a gas station. The resulting damage can crush players and establish a new area of cover. The geography of the map Strikezone will change almost completely when a player calls in an Odin Strike — a destructive care package item that rains rockets down from space. The roofs of buildings come tumbling down in Strikezone, and the overall look of the map transforms from abandoned and dilapidated to totally decimated.

Some of those changes are simply cosmetic. Other dynamic map events severely alter the layout of a map.

Rubin said that, surprisingly, those changes have been met with an enthusiastic response from pro Call of Duty players who have playtested the maps.

"I was concerned that the pro guys would want static maps," he said. "When we brought 'em in and let them play it, they loved it." Even the response to Strikezone's dramatic shift in shape and structure was received positively, he said. "The closest thing I could find to a complaint about that was, 'It takes me a few seconds to re-figure out what the map looks like in my head.'"

At its multiplayer reveal, Infinity Ward introduced two new game modes: Cranked and Search and Rescue. Cranked ratchets up the thrill (and necessity) of chaining together kills. Every time a player scores a kill, a 30-second countdown clock starts. If it runs down, the "cranked" player explodes. Kills and, to a lesser degree, assists will add more time to that countdown clock, but never more than 30 seconds total. The timer forces players to be more aggressive and  makes life-saving, last-second kills that much sweeter.

Search and Rescue blends concepts from two other Call of Duty multiplayer game modes: the bomb planting/defusing of Search and Destroy and the dog tag-collecting of Modern Warfare 3's Kill Confirmed. The objective is to either plant a bomb at one of two bomb sites or, if on the opposing team, protect those two bomb sites. Each player gets one life. However, in Search and Rescue, when a player falls, he or she will drop a set of dog tags. If an enemy player snatches your tags, you're out of the game until the next round. If an ally picks them up, you're back in the game.

On a map like Whiteout, with its snowy, craggy and uneven layout, Search and Destroy excels. It's an exciting new addition, combining the better aspects of two great Call of Duty game modes. 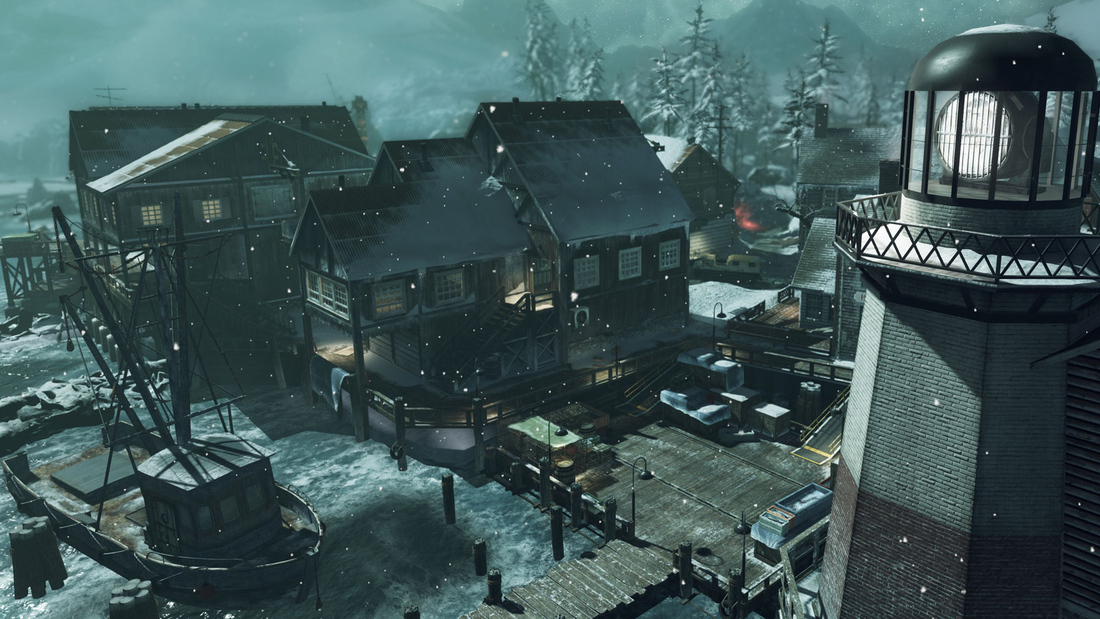 Another new addition to Call of Duty multiplayer in Ghosts are Field Orders. These are mid-match challenges that, if completed, reward players with additional XP, ammo refills and a care package drop. Here's how it works: The first player to die drops an icon that looks like a light blue briefcase. Within are random Field Orders — instructions to kill a player from behind or score two kills while crouching. Complete the order and you'll benefit. Die before you execute said order, and you lose it.

Rubin said that one of the available Field Orders are instructions to teabag another player's corpse. Yes, Infinity Ward is leaning into the concept of teabagging. At some point in Ghosts multiplayer, you may be tasked with repeatedly crouching on another player's face to gain a competitive advantage.

Killstreaks return in Call of Duty: Ghosts — deathstreaks don't, however — and have been reconsidered. Infinity Ward is scaling back on the number of airborne killstreak rewards, focusing more on ground-based attacks and flourishes. In the build we played, only a handful were available. Players can deploy SAT-COM stations, ground-based versions of the UAV. They can spawn a guard dog that serves both as a weapon and a spotter of enemy players. A hovering drone called the Night Owl helps protect players against mines and bombs and a shoulder-mounted rocket launcher, the MAAWS, uses a laser sight to target enemies.

There will be air-based killstreaks, however. The Helo Scout will call in a helicopter carrying a sniper. Most of what we saw from killstreaks today happened on the ground, not in the skies. The change, Rubin said, was about addressing "players having to spend time looking up — not physically looking up, but always mentally looking up" for skyward threats.

"We wanted to craft cooler experiences [with Call of Duty: Ghosts perks] and keep players heads-down on the map," he said. 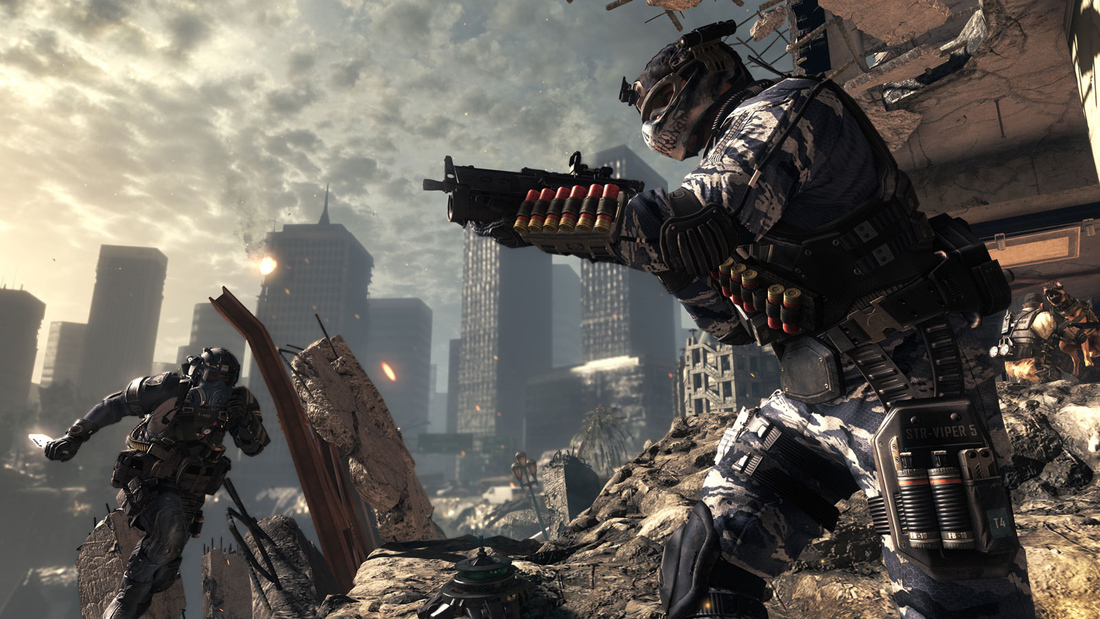 Perks in Ghosts have been updated in a manner that borrows a few ideas from Treyarch's "Pick 10" system from Black Ops 2. Players have eight points to spend on perks how they see fit. Some perks, like "Strong Arm," which lets you cook grenades faster and throw them farther, cost only one point. A familiar perk like "Sleight of Hand" or "Ping" — which sends out a radar ping exposing enemy locations when you score a kill — costs two, but a potentially powerful one, "Deadeye," costs five points. (With Deadeye, each kill increases the chance that players will score a critical hit, a deadly perk in the right hands.)

The system seems to borrow the better aspects of well-worn systems established by previous Call of Duty games, giving them its own spin and keeping them fresh. That appears to be the case with many of Ghosts' multiplayer features, which smartly iterated on things that worked well before, but could easily be improved upon or remixed to feel fresh.

While not every aspect of Call of Duty: Ghosts multiplayer component has been exposed, enough of it was today to make the annual update to Activision's venerable franchise feel exciting all over again. We've seen this battle play out before, but the twists and turns continue to be intriguing.

Call of Duty: Ghosts multiplayer revealed: Here's what we know