Share All sharing options for: Black Milk taps Mass Effect to fill the void of geek clothing for women

Black Milk is arguably most commonly renowned for its form-fitting Game Boy, R2-D2 and C3PO swimsuits and dresses. For many years it has offered women in the film, comic book and video game cultures what they desire, an escape from the often male-targeted, instant-dag boxy shirts to the sleek silhouettes proudly adorned with the subculture franchises they love.

"We think a lot of those kind of geeky, nerdy really fun things work so well with us is because a lot of merchandise you can find for that kind of subculture is very masculine," Black Milk's Alex Caton told Polygon in an interview. "There is really nothing specifically for women, and this is geared to girls who love this stuff.

"We think if you are going to love something, love [it] passionately and wear it on your sleeve as much as possible, or on your legs, if you can," she continued, saying that both Black Milk and its "Sharkies" — nylon and lycra adoring women — "definitely embrace the the geek culture and the nerd culture," reiterating that it is difficult to get video game culture-based womens' clothes.

Rob de Montarnal, manager on BioWare's business development team, worked with Black Milk to setup the partnership. He told Polygon that BioWare believed that Mass Effect would translate well to a range of womens clothing as a "meaningful proportion" of the franchise's base is female and the company is constantly "looking to offer fans new and cool products based on our franchises."

"When attending conferences, we also noticed several of our fans wearing Black Milk leggings, they make great stuff," deMontarnal said. "We felt that offering a Mass Effect line of clothes with an awesome and respected partner like Black Milk was a no-brainer. We hope our fans feel the same way."

The clothing line was conceived when the video game company approached the boutique design manufacturer last year after BioWare employees, who were fans of Black Milk's gear, said would really love to wear some Mass Effect garments.

"We were also really impressed with their designs, the background of the company and the momentum they have generated using social media with their fanbase," deMontarnal said. "We felt that a lineup of Mass Effect clothing would be something that BioWare fans would embrace. BioWare reached out to Black Milk to gauge their interest and we found that some of the staff at Black Milk were fans of the Mass Effect franchise. The conversation moved quickly from there."

"And as soon as they approached us, there are quite a few Mass Effect fans in our office as well, and we all just kind of went 'Yep! We need to do this!'," Caton said.

Black Milk jumped at the chance to develop the Mass Effect line not only to fill the void of video game culture clothing for women but also because the Mass Effect franchise offers an in-depth story driven experience, a theme which is reflected on its previous clothing lines based on licences such as The Lord of The Rings and Star Wars.

"When it comes down to the storytelling aspect, it is an incredible game with a really intense story that is really easy to get stuck into it," Caton explained. "And storytelling is one of the biggest things for us in all of our releases, in all of our garments, we like to tell a little bit of a story. So being able to work with Mass Effect and kind of getting involved with all the stories there, has been really awesome."

The first Black Milk Mass Effect collection includes 12 items, such as N7 Wet Look leggings, Tali'Zorah vas Normandy dresses and First Contact Sucks swimsuits. The line went through some trial and error before arriving at the final dozen. One particular item that was teased before the line's launch was an N7 inside-out skater dress prototype, which didn't make the final cut.

"We are extremely perfectionist with our designs. James, the creator of Black Milk, is very particular," Caton explained. "Basically we have we set ourselves to a really high standard if we look at something and go you know, that line isn't completely flattering, we can do better on this, we will scrap it and try again and hopefully make it as perfect as it can possibly be. That was the case with the inside-out skater, that we think we might have a another crack at it and see what we can do." 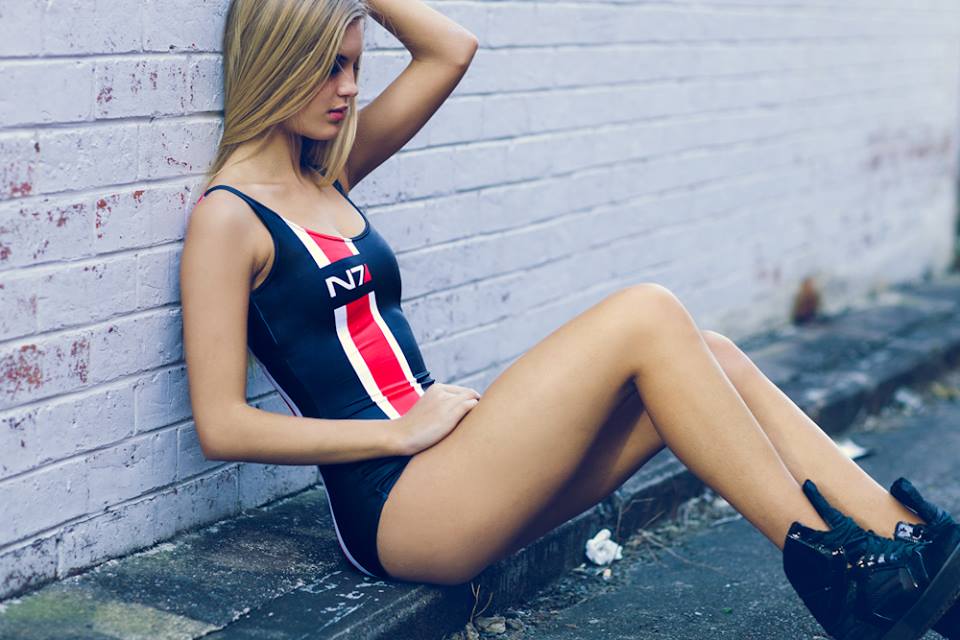 Creating licensed products often means dealing with a lot of restrictions, Caton said, explaining that BioWare has been "absolutely amazing" to work with and happy for the designers to do what they wanted, as long as "it is in with the spirit of Mass Effect."

Caton said that although they haven't looked beyond this collection of clothing, doing another Mass Effect line "is possible" and they haven't ruled anything out.

"We would absolutely love to look at doing another release. I know the graphics team is really excited about it, they are really into the game as well, so they are really excited about potentially doing more stuff," she said. "If we did do another release we would be looking at doing some original artwork from our illustrators and graphic designers."

If it is something fans and the design firm want to see, de Montarnal said BioWare would be excited to work with Black Milk on future lines for the company's titles.

At this stage, BioWare is the only video game company Black Milk is working with on licensed designs, but they would "absolutely love to do more."

"Nothing is out of reach, we like to think," Caton said. "We are just looking forward to continuing to work with video games and really put some awesome gear out there for women in the video game culture."