There's a world of potential hiding inside of Payday 2's vault

Share All sharing options for: Payday 2 review: the getaway

Review and information for Payday 2

The antagonist of Payday 2 is time.

In Overkill Software's sequel to 2011's Payday: The Heist, four humans must work together to complete increasingly elaborate heists, from local jewelry stores to a senator's multi-story penthouse. The game contains various stages and missions that are to be repeated innumerable times.

Variety stems from procedurally generated elements: the location of a vault, the number of security gates, the position of security cameras, the length and capability of the waves of police officers and more are different every playthrough. Sometimes you get a lucky break; most times plans get botched and you're surrounded by cops, snipers and helicopters.

That's where time comes in. The police of Payday 2 are soft opponents on their own. When working with experienced players, it's possible to dispatch hundreds of cops in a single mission. Police are limitless. Your supplies are limited. After learning to suppress the cops, the goal is to complete a mission before health and ammo run dry. The goal of the game is to manage time — to stealth an entire heist, or at least to get a head start on the cops’ arrival.

Of course, there are missions where stealth isn't an option. For those, the goal is to just stay alive.

Supplies are limited — police are limitless

To help, four unique classes are available, each with its own collection of skills that can be purchased with experience points and cash rewarded for completing missions. There's the Mastermind for crowd management; the Enforcer for cop suppression; the Technician for gadgets; and the Ghost for stealth. They serve their own particular role in a heist, e.g. the Mastermind can zip-tie lots of hostages, while the Technician can reduce the time required to open a locked safe.The classes are smartly designed, and achieve more than the typical designations of "tank" or "medic."

Payday 2's different classes flatter one another, like cake and ice cream. Coolly violent, meticulously stealth cake and ice cream. Here's an example. With three friends, I robbed a jewelry store on the hardest difficulty setting without the police ever being notified. The Ghost knocked out the security guards, the Technician opened the vault, the Mastermind zip-tied all the civilians and the Enforcer sprinted the bags of cash to an escape van. Easy as pie.

Mixing the different classes proves particularly helpful in missions that span multiple days, where it may be necessary to quickly rob a shop, violently escape an FBI shootout and stealthily infiltrate a heavily guarded residence. The multi-day contracts, which add difficulty and variety to Payday 2, are its centerpiece, and the closest its story comes to making a fleck of sense. They have dramatic highs and lows, moments of quiet and moments of insanity.

Each day contains its own mission, but additional "escape" sequences may appear if a prior mission is especially harried. It's entertaining (read: stomach churning) to watch your bags of stolen coke or cash winnowed over the course of the days.

A clean robbery feels like you're playing a key part in a classic heist film. I credit half of that feeling to the location designs, which are unabashedly inspired by films like Heat and television shows like Breaking Bad. I also credit the emphasis on performing parts of a heist that aren't shooting people. The game has a shout button, that will intimidate civilians to lie on the ground. Heavy jewelry must be carried one bag at a time. It slows you down. You'll often find your squad daisy-chaining bags out a window and through an open-street, your backs to one another, trying to provide cover fire. The most enjoyable part of the heist is the heist itself, not the killing dozens of cops — a legitimate and overdue accomplishment for a game of this genre.

Even the most tedious and common moment of a stealth heist, waiting for safes to open, staring at the hard metal surface, is filmic. It echoes all those moments in heist films where the robbers synchronize their watches, then minutes later, while they're watching the seconds tick by, it becomes evident the plan is about to go to shit.

Payday 2 is one of the most cinematic games I can think of that doesn't force you to relinquish control for a cut-scene or carefully framed set-piece. And so it's particularly frustrating that the final build, as played up until the day of release, has been so plagued by bugs. An issue with Steam's cloud sync on the PC version caused server disconnections. While that is slated to be fixed, a number of other missions were cut short in the loot reward screen, inexplicably. 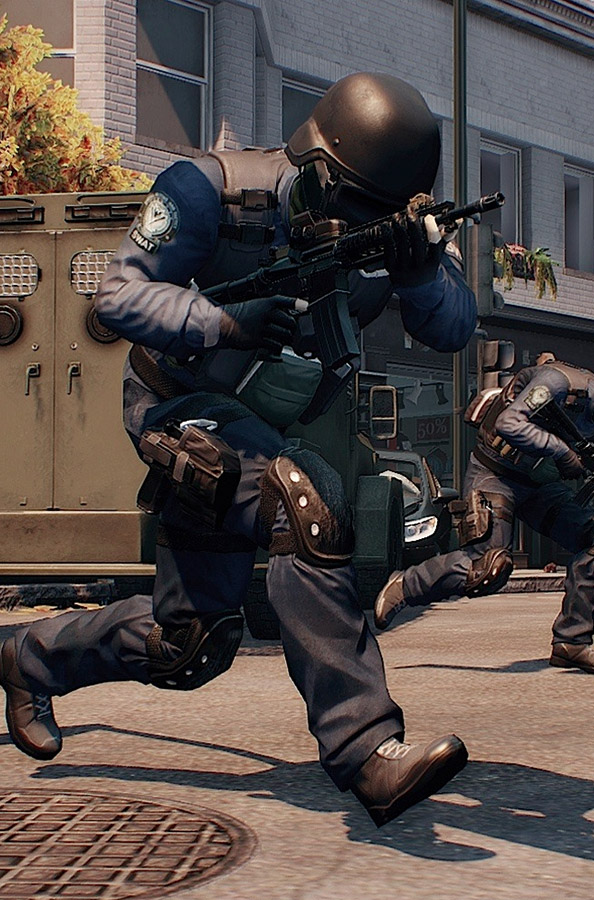 The loot — weapon add-ons, masks, cash — is rare and random. One blindly chosen piece is dispensed per successful mission. To lose it, or worse to lose experience progress, is maddening. In the words of Polygon's EIC, it's like successfully robbing a bank and almost getting away with it, except the ground opened up under your feet and swallowed you whole.

There's also the issue of mush-brained artificial intelligence. Payday 2 includes an offline mode, and A.I. will lend a hand to parties of less than three. But the A.I. is comically bad, and fringes on suicidal, running into cop-covered streets to retrieve a fallen companion. While missions can be completed despite the A.I., doing so is more like a sideshow, a surreal, inexplicable feat of skill for the most stubborn and ambitious. 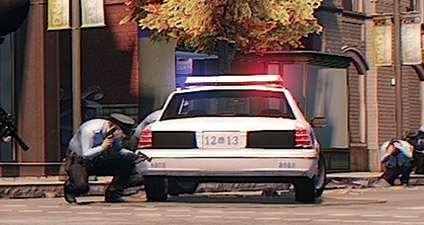 Payday 2 is a game about the moment slowly passing by. While you can do many interesting things — tie civilians, bust safes, overwrite security systems — the bulk of the game is spent waiting. You're waiting for a vault to open, for a wave of cops to dissipate, for an extra player to join your squad. Time is the source of its tension and also its irritation.

When a friend disconnects from the server, and you're stuck with an A.I. comrade at the worst possible moment, or a bug costs you loot or experience points, that waiting loses its context and its purpose. When Payday 2 works, it's a special experience, an intelligent first-person game with guns that manages to be more than a shooter.

There's a world of potential hiding inside of Payday 2's vault

Overkill has plans to update the game, and squash the bugs. A year's worth of DLC is scheduled post-release. But right now, it's like I'm standing outside a vault. There's something brilliant inside, and I'm willing to wait.

Our review of Payday 2 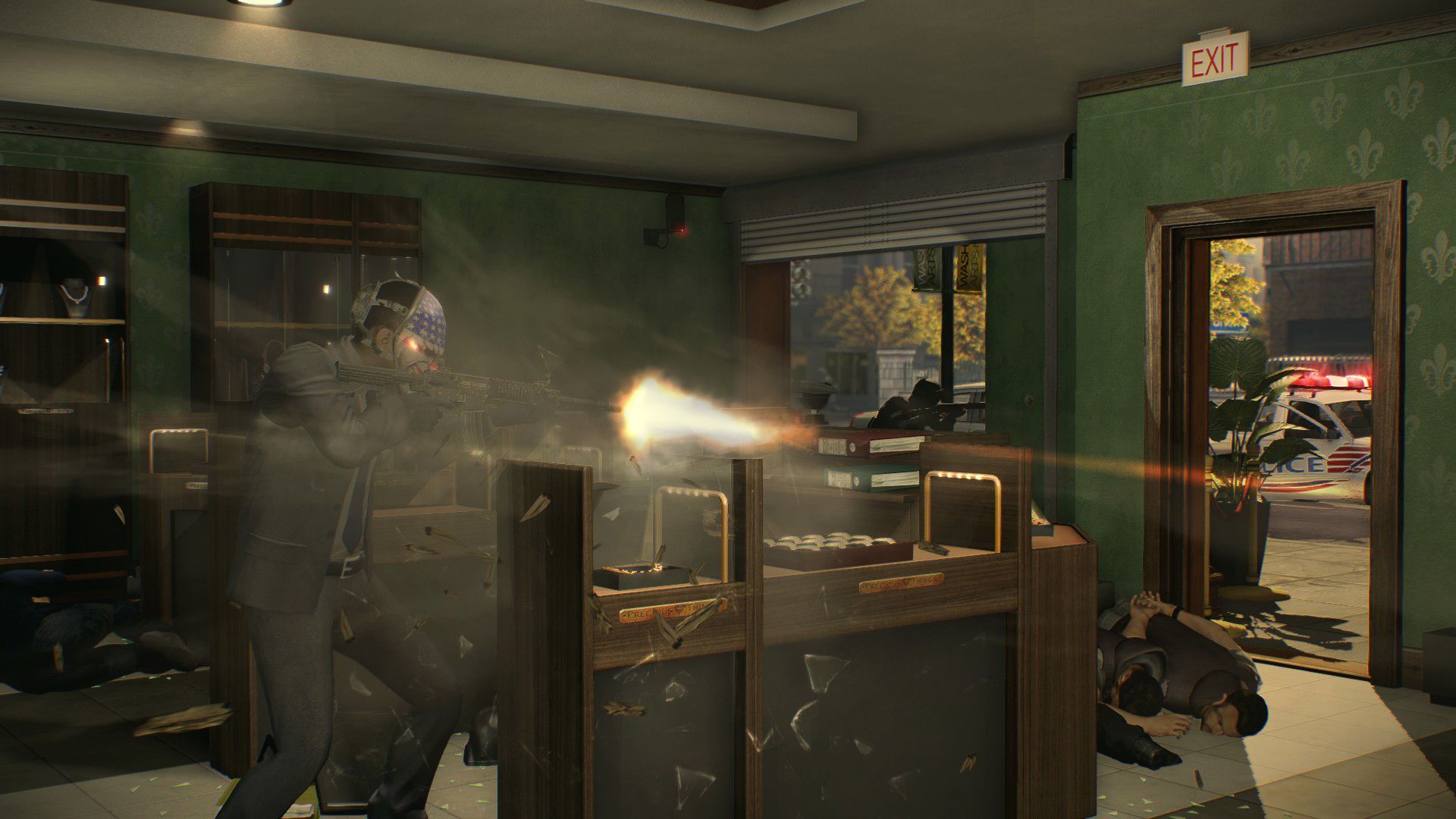