Share All sharing options for: WildStar to require subscription, players can buy time with in-game gold

WildStar, Carbine Studios' upcoming, imaginative MMORPG, will require its players to pay a subscription to gain access to the title; however, those same players can also purchase game time using the title's in-game currency as well.

In a roundtable call attended by Polygon, executive producer Jeremy Gaffney laid out the business model. First, players must purchase a copy of the game for $59.99, which comes with one month of access and three "guest passes," to allow friends to play the game for free for a week. To keep themselves in the game, players can either sign up for a traditional subscription — costing them $14.99 a month (or a reduced rate if they pre-purchase three, six or 12-month subscriptions) — or by spending their accrued in-game gold on "CREDD."

CREDD, or Certificate of Research, Exploration, Destruction and Development (a reference to the four different player professions available in WildStar), can be used in-game to add an additional 30 days to your allotted time. The resource originates on Carbine's website, where it can be purchased for $19.99; after that, players can sell it on the in-game Commodities Exchange for gold. Sellers can set their own price for the CREDD they've purchased, meaning the economy will fluctuate server to server based on the principles of supply and demand.

"There's two kinds of players we see that we need to make happy," Gaffney said. "Player number one is, they don't want to pay a sub. They just want to play the game. Well, okay, they can buy CREDD using in-game gold from other players in the Commodities Exchange, like a stock market.

"How does CREDD enter the economy? Well, there's another class of player. They are happy enough playing the game, but they want to make a little extra in-game gold. What they can do is buy a little CREDD, they get an item they can now trade on the Commodities Exchange for someone else's gold. What this does is let the free market ... basically be the way people can trade their time for money with other players, because some people are time-rich, and some people are cash-rich." 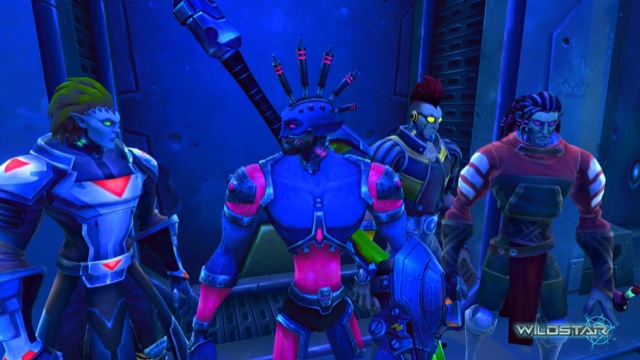 Carbine is taking extra steps to ensure that gold will be desirable enough to prevent the market from becoming completely inflated, but has to balance that ideal with preventing cash-rich players from outfitting their characters with the best loot thanks to their wealth. To strike that balance, Carbine is making the items that players will primarily want to spend their hordes of gold on non-essential to core gameplay; things like mounts, player housing or elements to add to your "war plot" — a fortress that you have to defend from sieging PvP players.

By making all CREDD transactions go through the Commodities Exchange, Carbine is hoping to curtail both gold farmers (who can't sell CREDD for real-world money thanks to the Exchange) and the perception that they're greedily selling in-game wealth for actual money.

"It's awesome, because it cuts us out of the loop, which is nice."

"It's awesome, because it cuts us out of the loop, which is nice," Gaffrey said. "We're not selling you gold pieces, because that's creepy. As a developer, as a publisher, that can rapidly get evil. If we're going to be like, 'Give us more money, give us more money and we'll give you in-game gold,' I don't know about you but that feels sleazy to me."

WildStar will buck the trend of most MMOs, which either launched with a fully free-to-play business model (like Cryptic's recently released Neverwinter) or reverted to one after losing steam with a subscription model (like EA and BioWare's The Old Republic). Gaffney said he's not as concerned with losing players due to the popularity of WildStar's business model — the reason people stop playing MMOs isn't because of value, but because of quality and retention.

"My argument is, when you have a game that's a subscription model, and people buy three-plus million boxes of it, that means there's a lot of consumer interest," Gaffney said. "People aren't scared off by the model. I think if you have people leaving a game, it's because people are not having fun rather than it being the business model. I think it's because you don't have the right long-term gameplay in there for retention.

"I think retention is the key to our market, and that's about having top-level gameplay that's fun, and replayable, and compelling, and you have a lot of it at launch. In many ways, that's our secret sauce. We talk about cool stuff like war plots and our Paths system, and our combat system. We have all these things in the game; but those bring you into the game. You have to have a solid game over the long haul for people to stay and pay — by whatever business model."

WildStar will launch sometime in spring 2014, and will be playable on the show floor of PAX Prime 2013.