Nearly every game that offers players choice and branching narratives suffer a harrowing dilemma for authors: How do you make them truly feel in control of a story that can only go in a handful of set directions?

Jon Ingold, creative director for the two-man game development studio inkle, had to answer that question for Steve Jackson's Sorcery, the mobile adaptation of the classic game book series released this past May. The title blends several elements into a clever package; part game book, part tabletop game, part proper RPG. However, it's a text game first and foremost, and during a GDC Europe talk, Ingold discussed the unique problems that the word-based genre faces — particularly, the dilemma mentioned above.

"The other reaction you get is, 'Oh that's so avant-garde. Text, that's really cutting edge, it's so bizarre.'"

The problem with those two opinions is it makes those types of games easy to write off; retro games can be dismissed as being archaic or novel, avant-garde games can be labeled as too inaccessible. For Sorcery, inkle hoped to split those uprights, finding a game that possessed the charm and ease of access of a retro game with the modern sensibilities and genre-morphing features of a haughtier text adventure.

Ingold attributes the game's success to the avoidance of certain pitfalls text games often encounter. The most obvious is reading fatigue — countless text games toss walls of impenetrable text at their players, which either scare those players off outright or tire them out with extended play. Most of Sorcery's text follows "the Twitter rule," Ingold explained; it appears in small chunks, a paragraph or two at a time, with important information placed right after a paragraph break to ensure players don't skip over it.

Another issue is repetition in the description of core game mechanics; Sorcery sidesteps this problem by randomly generating combat descriptions from an array of responses, ensuring that a description of an enemy attack doesn't pop up twice in a row. 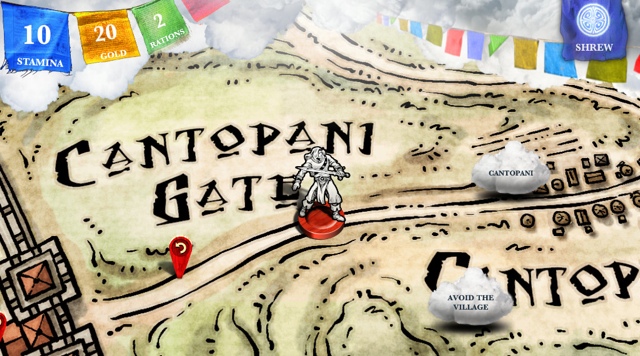 The most difficult problem to solve, however, is making the game's limited number of story branches feel like something over which the player has absolute agency. Sorcery is a pretty huge game, all things considered; its campaign was composed of over 150,000 words, 795 discrete scenes and over 2,600 different player options. Still, most scenes only had two or three "exit points," ways that they would terminate, bringing the player to limited number of conclusions. How could they make the player feel in control of a story like that?

The trick is to make players take ownership of the decisions they make. Game developers have a number of tricks up their sleeve to achieve that goal; Ingold explained that The Walking Dead is an excellent example of how developers can implement clever methods to make players feel like they're the ones making choices, rather than following one of two or three preset paths.

"The Walking Dead is kind of the poster child for branching narrative right now, and if you look at the way that game handles branching, the solution they used is to make you make the same choice over and over and over and over again, so when it finally branches, you feel attached to that decision because you remember making it, basically," Ingold said. "It's the same as putting XP into a character tree and when you finally unlock that skill, you feel like you earned it. You feel like you actually did that, it's not just a choice that happened."

"We're limiting choices in an attempt to build positive affirmation with the player."

Sorcery took a slightly different approach; the game nested smaller, moment-to-moment decisions within each story branch. By making these decisions — maybe lines of dialogue in a discussion, or destinations within a town — players can feel like they're shaping the story to their will; however, they're contained within a scene with the same limited number of results. By making those nested decisions, players feel like the ultimate results are thanks to their series of decisions, not because the developer required them to choose from two branching options.

By giving these kinds of "analog options," Ingold said, players feel responsible for the story, despite the fact that inkle could still limit the extremity of Sorcery's branching narrative. As a result of that limitation, players are able to feel like the result of each scene was because they made the right decisions — or even the wrong decisions, so long as they were their decisions to make.

Oftentimes, though, there is no wrong decision; in a lot of scenarios in Sorcery, almost all outcomes were positive, because positive outcomes make players feel like their path through the game was the absolute best one they could take.

"We're limiting choices in an attempt to build positive affirmation with the player," Ingold said. "I'm amazed other games don't do that; like, the interrogation sequences in L.A. Noire, for instance. It's very, very strange to me that the people who made that game had a series of three-way choices where there's only one right answer, but as I player I was never going to replay it, so why wouldn't they have all three of them be right? The game would be the same, but I'd feel like a better detective, and I never would have replayed it to find that out."

Sorcery's second installment will launch on iOS in late September or early October.