Assassin's Creed 4: Black Flag's companion app, first announced at E3 2013, will allow players to access its fleet-building mini-game away from the actual game.

During a press event in San Francisco, we got hands on time with Black Flag and its yet-to-be-named app. The app is free to anyone who wants to download it, though it requires a Uplay account with Black Flag data to work. At launch, the app will work with iOS and most Android tablets; support for iOS and Android is also planned for mobile devices. In addition to acting as a real-time interactive map, the app also serves as an access point for information in the Animus database and a way to manage "Kenway's Fleet." 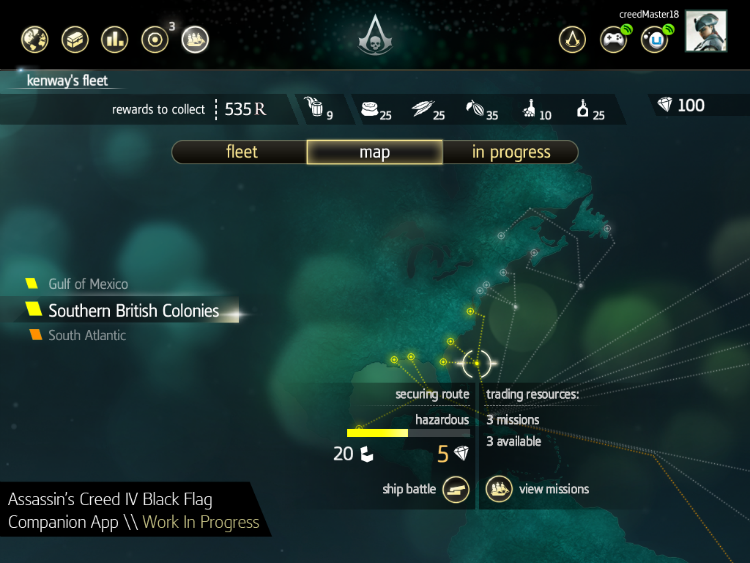 According to a Ubisoft representative, this function is sort of "like a mini-game" for Black Flag. During your naval travels, you'll capture ships, which can then be sent out on different missions to claim trade points and collect cargo. The more cargo you gather, the more you can upgrade your ship, weapons and even protagonist Edward Kenway's clothing. This mini-game is accessible through the app at any time, the rep said, and when players return to the game it will register new progress.

During our demo, we also used the app to help navigate the game's open world. On our tablet, we were able to mark specific locations on our menu map — this sprang up instantly in game. We used this to find sunken ships, which are scattered throughout the ocean.

Shipwrecks often contain gold or cargo tucked away in underwater chests. Edward explores the underwater world much like he does dry land. Sharks and eels will attack if they spot you, but nearby wreckage or weeds can provide cover. As with human enemies, you'll need to break their line of sight to escape. Edward is also limited in his exploration by his air intake, but nearby barrels provide a quick way to replenish your oxygen supply.

Assassin's Creed 4: Black Flag is scheduled to launch Oct. 29 for Xbox 360, Wii U, PlayStation 3 and Windows PC. The game will be available for Xbox One and PlayStation 4 at a later date.