VectorCell's remake of Studio Delphine's classic is very pretty, and very problematic. With a plot straight out of paranoia-obsessed '90s sci-fi, and excellent level design that directly references the classic game, Flashback has a lot of promise. But that good will is wasted on stiff controls and glitchy, unforgiving gameplay.

Flashback puts you in the shoes of Conrad Hart, an amnesiac who has escaped the clutches of an evil government and run off in search of his memories in a futuristic cyberpunk universe. Flashback's story shows its age — the plot twists and turns into a too-serious mash-up of They Live and Total Recall — but it works as cheesy retro sci-fi and fits the '90s vibe.

A 2D puzzle platformer, Flashback is also full of guns and heaps of cybernetic enemies. Conrad runs, dodges and ducks obstacles adroitly, but his jump is pathetic, and a climb/jump hybrid move is necessary for the platform heavy lifting. You have offensive abilities in the form of a gun, grenades and other throwable objects, good for destroying the drones, cyborgs and occasional bosses littered throughout Flashback's stages.

Level design is a highlight, with excellent layouts that blend combat, stealth and platforming sections. Puzzles are mixed in everywhere, requiring you to blast the right switches, time your jumps to avoid insta-death lasers, or toss your gear past tight corridors. When Flashback relies most on puzzle-solving and quieter environmental exploration it succeeds best, recalling the classic game's strengths and making good on the work VectorCell has put into updating the environments. The revamped locales are nicely realized, with gobs of neon and an impressive level of detail that paints a lived-in dystopia. 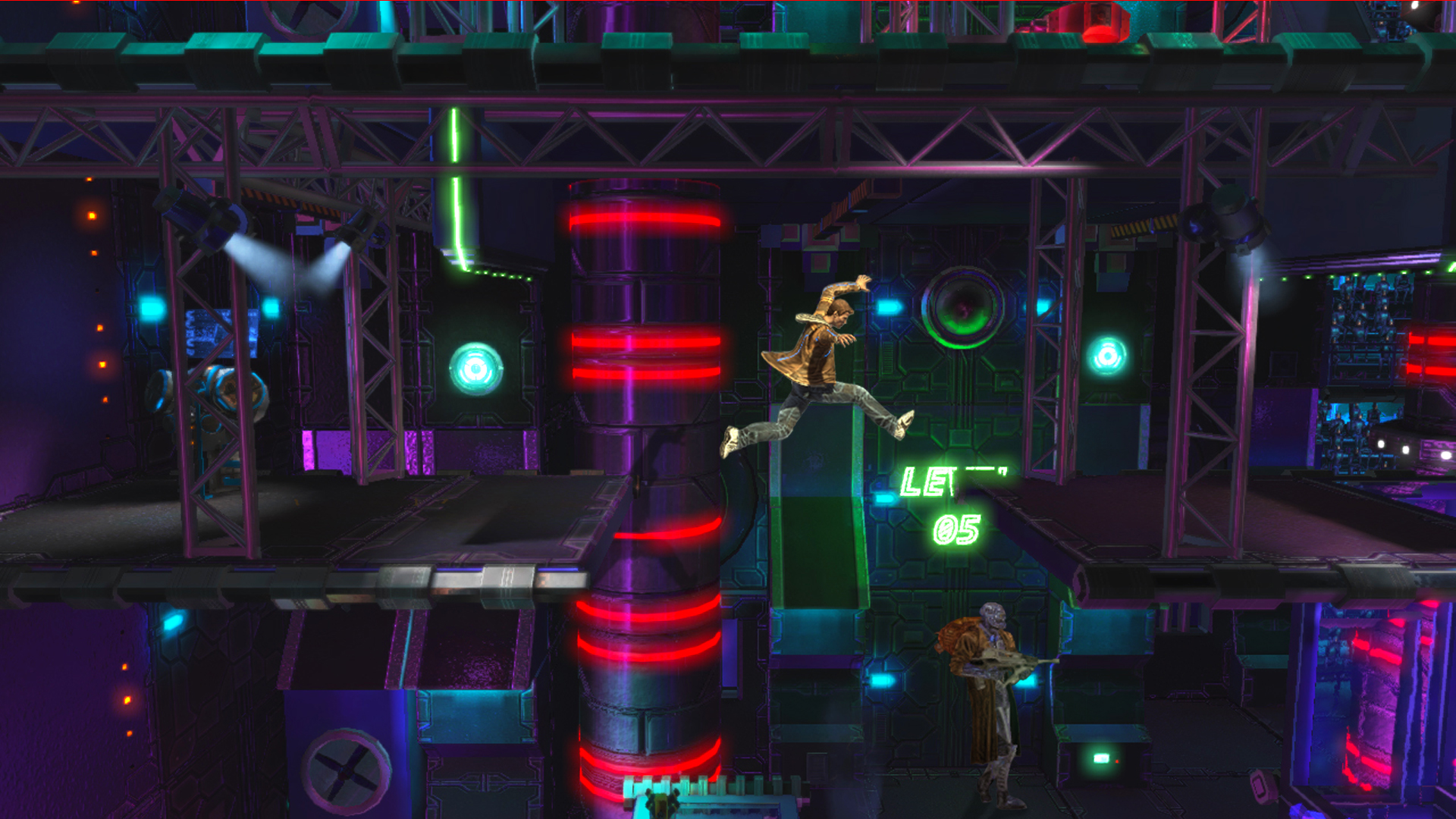 But Flashback collapses under fuzzy objectives and an infuriating lack of focus. I died countless times without understanding why, and the game never gave me a clear indication of what was happening. There were times I didn't know if I passed an area because I did what I was supposed to do, or if the game had let me progress due to a bug.

Bugs are rampant in Flashback. Several times, I had to restart from a checkpoint because Conrad got stuck in an animation, or the controls for walking left and right simply stopped responding. At other points, Conrad's jump/climb animation caused me to get stuck on elevator platforms. These bugs are especially infuriating thanks to Flashback's imprecise controls.

When he isn't stuck on scenery, or getting pummeled to death as he finishes his climbing animation, Conrad is aiming at enemies' feet thanks to an unresponsive control scheme. Flashback's controls — and Conrad's responding animations — are stiff, awkward and frustrating. I rarely felt like I was fully in control of the character, and some moves — like a stealth kill — almost never worked as intended.

The original Flashback is included here in the form of an arcade machine accessed from the main menu. It's a nice touch — the ability to play through the source material and get a feel for Flashback's evolution is fascinating, though the slower pace is difficult to adjust to at first.

Flashback is a nostalgic misfire

With beautiful environments and intelligent level design, VectorCell did most of the work of making a memorable puzzle-platformer. But awkward controls and frustrating bugs keep Flashback far away from the classic status its 1993 forebear earned.