Media Molecule on Tearaway's past and the studio's future on PS4

Share All sharing options for: Media Molecule on Tearaway's past and the studio's future on PS4

Tearaway has changed quite a bit since its announcement at last year's Gamescom event, inarguably for the better.

It's still got the core components that make the game so unique — players can interact with the game's papercraft world and its messenger protagonist, Iota, in a number of clever ways using the Vita's inputs. A tap on the rear touchpad can send players' fingers into the world, the front-facing camera projects the players' face into the world's omnipresent sun and pieces of paper throughout the world can be folded and unfolded using the main touchscreen. All these features are still in the game, but now they're combined with smooth, surprisingly twitchy platforming as well.

During a Gamescom demo, a full level from the game was demonstrated: A barn full of secret passages, enemies to spar with and colorful paper setpieces to interact with. Both the pacing of the game and Iota himself move quickly, running from room to room and puzzle to puzzle, navigating the environment and taking out enemies as he goes. Some of the puzzles require quick, twitchy jumping and world manipulation; sometimes in tandem. It looks more like a proper platformer, and less like a hyper-artistic adventure game.

Tearaway's lead designer, Rex Crowle, explained during the demo that the changes are a result of Media Molecule's focus on the title's platforming elements; changes that came after it nailed down the game's paper aesthetic and creative features.

"Well, I mean obviously, we have the skills of making platforming games, so it felt like we had a good core then, to build this adventure," Crowle told Polygon in an interview following the demo. "We've got great designers that can create that scenery to climb through and run on, as the messenger themselves was becoming more agile, so we knew we could make more of that."

Tearaway's transformation is indicative of Media Molecule's transparent development process, which was before seen in LittleBigPlanet for the PlayStation 3. At that game's reveal, all we saw was a simple platformer with a level creation tool; the depth of those tools, the character customization, the variety of gameplay and the game's social features were revealed to fans later. The additions and changes weren't hidden or ignored; they were shown as part of the full creative process.

"We like that, because it's basically hard to be transparent and talk about something you don't have," Media Molecule studio director Siobhan Reddy said. "We'd rather show people, and we've always like the idea of, [Media Molecule co-founders] Mark and Alex have always been a champion of this, like, warts and all approach."

Reddy explained that Tearaway had in fact changed; in previous iterations, it was focused entirely on being a game about interacting with a papercraft world.

"We had tried right at the beginning, we had tried a lot of it not being that full platformer experience," Reddy said. "It was kind of different prototypes of how to get that player outside of the game, and the character inside of the game's relationship going. There were a lot of things tried out that didn't get the same kind of bond."

"It needed to be an adventure that you go on, and these features are part of the texture of the landscape; it's all made of paper, so it did all make sense," Crowle added. "Like, 'Why am I using the rear touch now?' Well, I'm using it because I can stick my fingers through because it's paper, and it's thinner here. Rather than like, I'm tracing an arcane symbol of a pentagram on the back in order to trigger a cutscene of a man's head exploding."

In a talk at SXSW Gaming earlier this year, Crowle discussed one of the earliest iterations of what would become Tearaway, in which the players' finger poking through the back of the screen would, in fact, be the game's main protagonist. It had its share of problems — chief among them being the player would have to balance the Vita on their finger while they played with the other hand. More than that, though, it made the world feel less alive; those kinds of acts of God need an in-game audience, he said.

"Apart from anything, then you've got an active person in the game to witness all this mad stuff you're doing," Crowle said. "If you're just doing it directly, then who's reacting to it?" 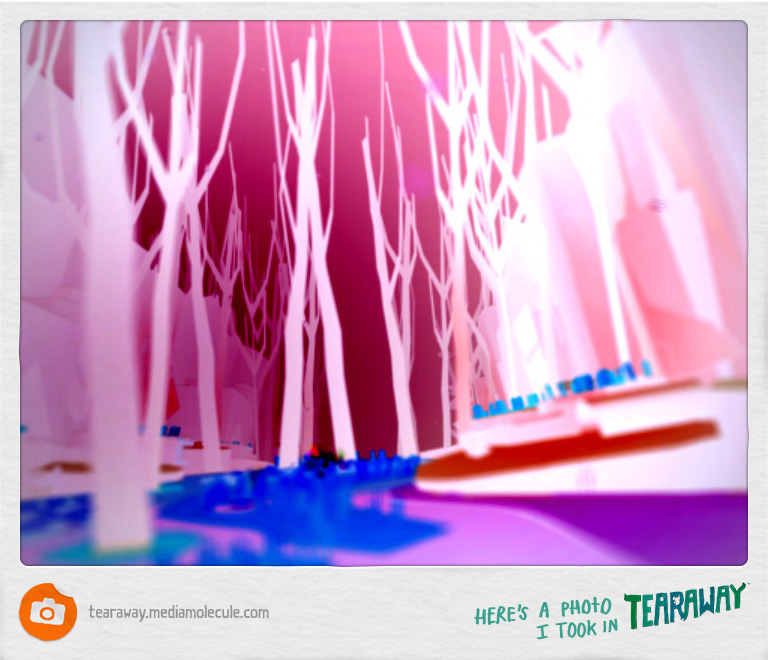 Tearaway launches this November on Vita; following that, Media Molecule's plans are up in the air. Reddy explained that Media Molecule sees Tearaway as something that could possibly become the start of a new franchise — we asked if it could possibly see a port to the PlayStation 4, a device which, like the Vita, features a myriad of potential inputs.

"We might do that? For us, it's like, let's get this one done," Reddy said. "We're obviously doing another project for PS4, so we've got the controllers, we've been looking at them. But anything we do has to be about the relationship between that godlike player and Iota or Atoi. Anything we choose to do with it has to be about enhancing that, and not just because we could. Because of course we could. The answer could be, 'Yeah, we can put it on PS3 and PS4 and iPhones, and et cetera.' But the right thing for us to do is to figure out how those core aspects of the game translate to other platforms. We haven't had the time to figure that out."

"It's really cool, and I hope we'll start talking about it soon"

As for what that other project — which a portion of Media Molecule has been working on alongside Tearaway — may be, Reddy and Crowle were tight-lipped. However, we asked if it has anything to do with the PlayStation 4 tech demo Media Molecule showcased at the console's reveal event this year; a demo featuring puppets controlled by Move controllers and clay modeling user-generated content tools. Reddy said the project they're working on may feature some similarities with that presentation.

"That's the basics, the whole thing we were talking about showing our wares as we go," Reddy said. "That project was a bunch of the things we really loved about where that tech was at that time. So it's kind of the seeds of interesting things to come.

"It's really cool, and I hope we'll start talking about it soon," Reddy added.