Need For Speed Rivals is a living game, and a sign of things to come

Share All sharing options for: Need For Speed Rivals is a living game, and a sign of things to come

Just a year after being handed over to Criterion, the Need for Speed franchise has a new steward, a studio created from the ground up specifically to make games for the franchise.

Starting with Need for Speed Rivals, Ghost Games will oversee all things Need for Speed, while Criterion will move on to another, yet-to-be-announced title.

"Ghost is now leading Need for Speed and there will certainly be some announcements about how that will evolve and work in the near future," Marcus Nilsson, executive producer on the game, told Polygon. "Criterion is doing something else, but that doesn't mean they can't help us on this."

Specifically, an EA rep told Polygon, about 80 percent of Criterion are currently working on Rivals with the remaining group working on the new project.

Ghost Games was formed about two and a half years ago in Gothenberg, Sweden, Nilsson said. The studio, originally formed as EA Gothenburg and then rebranded last November, has since grown to about 100. The studio is made up of an assortment of experienced developers who come from a mix of studios including DICE, Criterion, Turn 10 and Bizarre Creations.

"They're from everywhere," Nilsson said, who led development on two Battlefield games and Shift 2 Unleashed before helping to form Ghost.

Need for Speed: Rivals will be the second Need for Speed to use the Frostbite engine and the first to use the latest build of the engine, Nilsson said. The studio was staffed with that in mind.

"I think Ghost brings things to the Need for Speed franchise on many levels," he said. "I think we bring a strategy about how to think going forward, a different type of creativity and the experience from where we are coming from."

In Rivals, players will be able to take on the role of either a racer or a cop, selecting from and then completing an assortment of speed lists or assignments in order to level up their drivers. 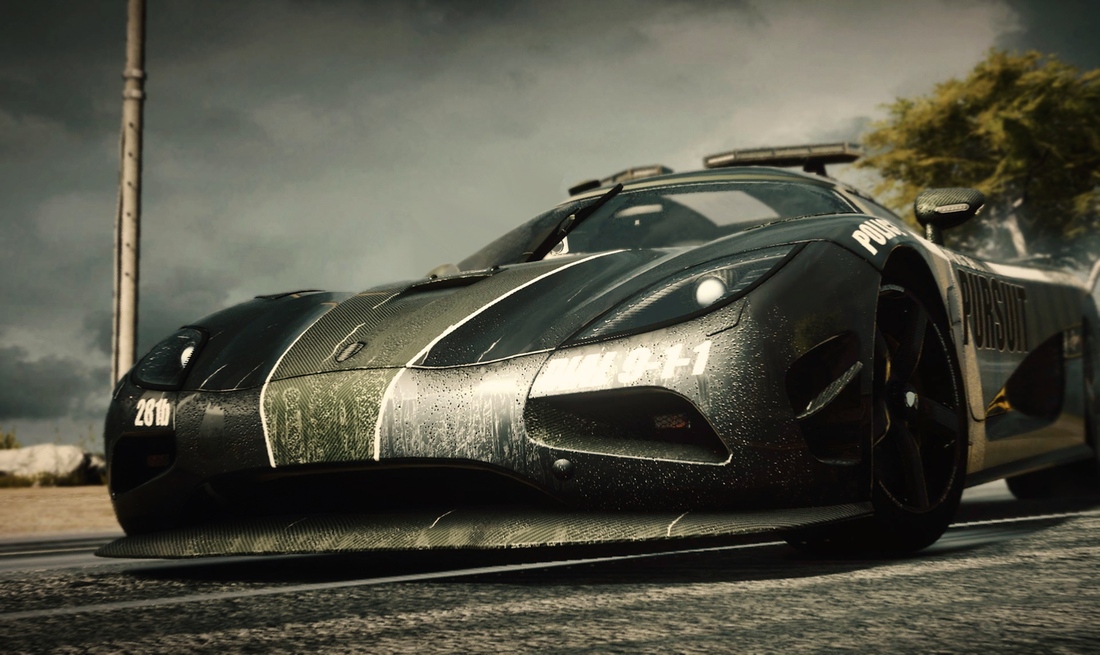 In a short demo at Gamescom this week, Rivals senior producer Jamie Keen, walked press through three elements of the game: All Drive, customization and progression.

The idea behind All Drive is that the game is an open-world experience that seamlessly flows between single and multiplayer, assignments, challenges and just messing around.

In action, the game feels like a living world free of constraints or the typical gamification of fun. While players need to choose an assignment (or a speedlist if they're playing as racers), there's not much direction in the completion of this list of objectives. A checklist appears on the right side of the screen to remind players of what they need to do to complete the list, but they're not forced to, or directed how to.

Instead, players roam the world of Rivals looking for their own fun. As I cruised the roads of Rivals in a cop car, a dispatcher provided a running commentary on the things going on in the world around me. There was a high priority driver speeding along a particular road. Other police were in pursuit. A driver took down a cop.

The dispatch never directed me to incidents, but rather piqued my interest. If I wanted to get involved in what I was being told I could, if I knew the map well enough, just drive over there. If I wasn't as familiar, I could bring up the map, drop a marker and then get directions.

Heading to one particular pursuit, I found myself distracted repeatedly by other drivers, both AI and player-controlled, driving around me. At one point a much higher priority racer, his car marked with a flame and the number 15, zipped in front of me at an intersection. I decided to shift targets, wheeled in behind him and hit my lights. Once I turn the lights on in my cruiser, the game initiates a pursuit, allowing me to use my tools, like an EMP, against the driver.

In the course of five minutes the game seamlessly shifted me from single-player, driving to a sort of game-generated objective, to a player-created mission. It was amazing.

And it was just the tip of the iceberg. The game features a robust level of customization, the ability to progress naturally through levels and unlock items as both a racer and a cop. It also has a cool mobile app that adds an entirely new level of play to the game.

"You can be sitting on a bus or at home and you can see what friends are doing in the world," Keen said. "It feels really embedded in the core game."

The live map gives gamers a top down view of all of the game's action updated in real-time. And the Overwatch mode isn't about just watching, you can also reach into the game and either help or antagonize your friends.

Clicking on a player, Keen gave the car a bonus nitrous refill. Moving over to another player, he turned on a jammer, adding static to their screen.

"There are positive and negative things you can do to either side," he said. "Do I want to help or hinder this guy? You get to choose."

Nilsson is especially proud of the Overwatch mode and the potential to create emergent gaming that it provides.

"The Need For Speed network and Overwatch stuff are probably the biggest things we bring to the game," he said. "It was really, really early on in working on the Battlefield Battlelog.

"But I don't want to have just Battlelog for Need for Speed. This is all designed to fit into the experience, it's about driving a car instead of shooting people in the face. We are building this from the ground up."

In theory, for instance, players can see all of their friends live on that Overwatch map, even if they're playing on different platforms. An EA rep clarified that while the tech supports this, they haven't found out if the platforms will allow it. If they do, the potential that it creates, being able to observe a PS4 and Xbox One gamer racing at the same time down the same road in real-time, is enticing.

Enticing too is Ghost's take on what it means to be a Need for Speed game.

"Need for Speed felt more like a marketing-driven brand than a brand for gamers," he said. "I want to change that.