Helldivers is a game that a lot of people are going to be talking about very soon, and likely with pained laughter.

The game, which was announced at Sony's Gamescom press conference earlier this week, is in development at Arrowhead Game Studios, the team behind the co-op wizardry game Magicka. Much like Magicka, the joys of Helldivers are largely accidental — not on behalf of the developer, but of the player. There is a plethora of ways to die in Helldivers and, based on my demo, most of the come at the hands of your so-called allies.

Imagine a twin-stick shooter with swarming aliens, rapid-fire weaponry, powerful explosives, minuscule amounts of player health and access to devastating artillery strikes. That shouldn't be too difficult; the twin-stick shooter genre has been well explored, and a lot of those elements have been incorporated into games before.

Now imagine that game, but with friendly fire.

Just as Magicka allowed you to accidentally detonate a friend with a wayward spell, Helldivers sees its four-player co-op troops mowing each other down with alarming, hilarious frequency. Sometimes it's good-natured: An alien approaches your friend from behind, so you fire a shot in their direction, and it connects with the wrong target. Sometimes, your intentions aren't so virtuous. My demo saw a fair share of betrayal, revenge and straight-up murder, objectives be damned. 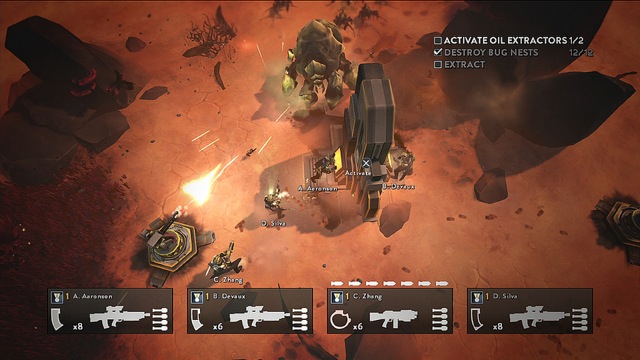 Shooting a friend isn't the only way to take them out, though. Before each mission, you're able to equip your soldiers with "Stratagems," a selection of deployable buffs or screen-clearing air-to-ground strikes. The lethal potential of the latter is evident, but even the former can maim. One perk lets you respawn a deceased player in an orbital drop pod; nearly half of these recovery vehicles landed on distracted players, making the gesture kind of zero sum in terms of helpfulness.

While avoiding your friends' bullets and Stratagems, you've also got environmental hazards to worry about — nearly my entire team fell in a chasm and died, simply because we assumed we couldn't — not to mention the aliens you're meant to vanquish. Even the smallest aliens can dispatch you in a couple hits, while larger ones can eradicate entire teams with one swing of their massive claws.

Getting hit doesn't mean certain death, though. Getting shot a couple times or attacked by a smaller alien will drop you on your back, a state that any teammate can easily help you back from. While you're on your back, though, you can still crawl, shoot your pistol or toss grenades. Communication in these rescues is key — while downed during my demo, I unpinned and spilled four grenades onto the ground. Simultaneously, a friend ran towards me to help me back up, and his valor was rewarded with his obliteration.

It's hard not to get excited about the prospect of playing more of it, especially considering its hyper-accessible launch plans: It's coming to PS3, PS4 and PS Vita, will be cross-buy compatible across all three, and will also feature cross-play, letting multiple players on PS4 and Vita play together in the same room. Helldivers made me laugh to the point of tears, which few games have ever managed to do. And this was in public — at home, with friends and alcohol, it's going to be an absolute riot.