Dead Rising 3's debut trailer during E3 2013 left fans worried that Capcom Vancouver would take the zombie-slaying franchise in a more mature direction when it launched alongside the Xbox One. That may be the case, but none of that maturity was showcased during a demo held earlier today at Gamescom 2013.

Dead Rising 3's protagonist, Nick Ramos, is a zombie-killing machine, and there's plenty of tools peppered across the environment for him to use in that pursuit. Slashing through waves of zombies with a broadsword or chucking a chainsaw into a clambering crowd are still the orders of the day; the world does look a bit darker, but the game's over-the-top violence and huge body counts are still very much a core component.

Much like in Dead Rising 2, the player is able to combine weapons and objects found around the world into far sillier armaments. A few new pairings were showcased during our demo — standouts included a pair of boxing gloves with gun barrels attached, a crossbow that launches highly explosive fireworks and an honest-to-God lightsaber. The effectiveness of each was undeniable.

Fortunately, Capcom Vancouver has made a few much-needed improvements to the flow of weapon acquisition and crafting. For one thing, Ramos is able to mix weapons anywhere, not just at a Workbench like in Dead Rising 2. Also, any weapons found or crafted by Ramos are added instantly to weapons lockers found in each of the safe houses peppered across the world. No longer will players have to hunt for items they've already found to put together a weapon they've already built; by stopping by a safehouse, they can get that weapon from their locker. 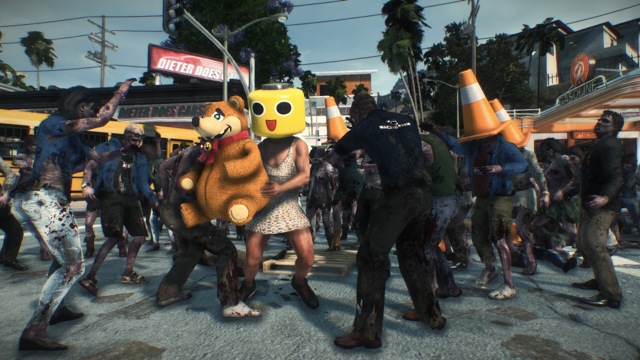 Blending vehicles works in a very similar manner. By parking a vehicle next to another, Ramos can combine them with devastating effect; for example, a steamroller and motorcycle can be combined, creating what looks like a two-wheeled steamroller with flamethrowers attached to the front of it. Dead Rising 3 doesn't seem that afraid of being too excessive with these combinations; logic would dictate that a motorcycle with a steamroller on the front of it couldn't even physically move. Also, where did the flamethrowers come from?

There's no shortage of Capcom references, either. Servbot's head can be found in the right shop and equipped (or used as a fairly puny melee weapon). A Blanka mask is also in the game, and can be combined with a battery to create "Roaring Thunder," a weapon that makes Ramos curl into a ball and project electricity around him. A similar combination is the "Dragon Punch" — boxing gloves mixed with a motorcycle engine — which lets Ramos execute a killer shoryuken.

Dead Rising 3 doesn't just rely entirely on old tropes, however. The progression system has been completely reworked, letting the player choose which stats they want to increase when they level rather than automatically upgrading their skills. Life, inventory space, melee or ranged power, mechanical aptitude, agility and "smarts" can all be individually upgraded to create a more customized Ramos. Stat points can also be assigned to individual weapon categories; after picking up the "Electrical" skill, Ramos can build weapons requiring electrical items by using any electrical item — if a recipe calls for a flashlight, he can just use a battery instead, for example.

There's some other clever stuff going on in Dead Rising 3 — Kinect-enabled follower commands and some surprisingly rich SmartGlass integration, to name a few — but the demo's gleeful carnage was soiled somewhat by framerate issues that cropped up when too many zombies were on-screen. Capcom Vancouver senior producer ensured the demo audience that the demo we were seeing was a few weeks old, and that the studio is targeting 30 frames-per-second for the final release — a goal they're working directly with Microsoft to achieve.

Hopefully, they can get there. Dead Rising 3 looks like a lot of fun, and it would be a shame if my Servbot head-wearing, lightsaber wielding killing spree is interrupted by something as sobering as framerate problems.

Dead Rising 3 launches alongside the Xbox One, the release date for which is still unannounced.