GameSprout offers anyone the opportunity to make games

GameSprout offers chance for everyone to make games

Share All sharing options for: GameSprout offers anyone the opportunity to make games

Game development can be an intimidating field, especially for those who have no experience with it. But if someone really wants to make a game, not being able to program, animate or draw should not deter them from giving it a go, according to game developer Jesse Schell. Cue GameSprout — an initiative by game development studio Schell Games to help people brainstorm ideas and develop them into playable games.

GameSprout, which is currently in beta, is a platform that encourages those with an interest in making games — no matter how experienced they are — to pitch their ideas publicly and to get feedback from the community. Those who pitch their ideas can then put out calls for help to bring on people who can assist them with the development of their game, whether it be providing code, art, playtesting or general feedback.

While the service has only been in beta for less than three months, a few games that got their start on GameSprout are now nearing completion and will likely launch by the end of the year.

Speaking to Polygon, Schell said that the idea for GameSprout was in part an extension of his book Art of Game Design, which is centered on the principle that anyone can become a game designer. It was also inspired by the response to Schell Games' Puzzle Clubhouse — a monthly episodic game series that encouraged collaborative design with its players.

"With Puzzle Clubhouse, we started to see that a lot of people were disappointed because they'd show up with this 50-page game design document and we'd be like, we're doing a game a month here, we can't make this.

"So then we asked ourselves, what if we stopped doing a game a month and we focused on something where everyone is welcome and everyone can help everybody get their stuff done, and that was what led us to GameSprout."

To get involved with GameSprout, users simply submit an online form detailing their game idea — it can be as in-depth or as nebulous as they like. The pitch then goes up on the community board where everyone can see it, vote on it, give feedback and offer to help.

"It's for anybody who's interested in being part of a public game development process, and that can mean somebody with no experience — somebody who just shows up and says, 'Hey, I've always wanted to make a game about two trees kissing or whatever,' and they put up their idea."

When an idea is posted, GameSprout then creates a checklist for the developer, informing them of the things they need to complete if their game is to go into production. The list includes items like having concept art, a prototype and laying out the control scheme for the game. Schell says GameSprout is trying to create a scaffolding that's going to lead new developers through the process of what needs to be done. 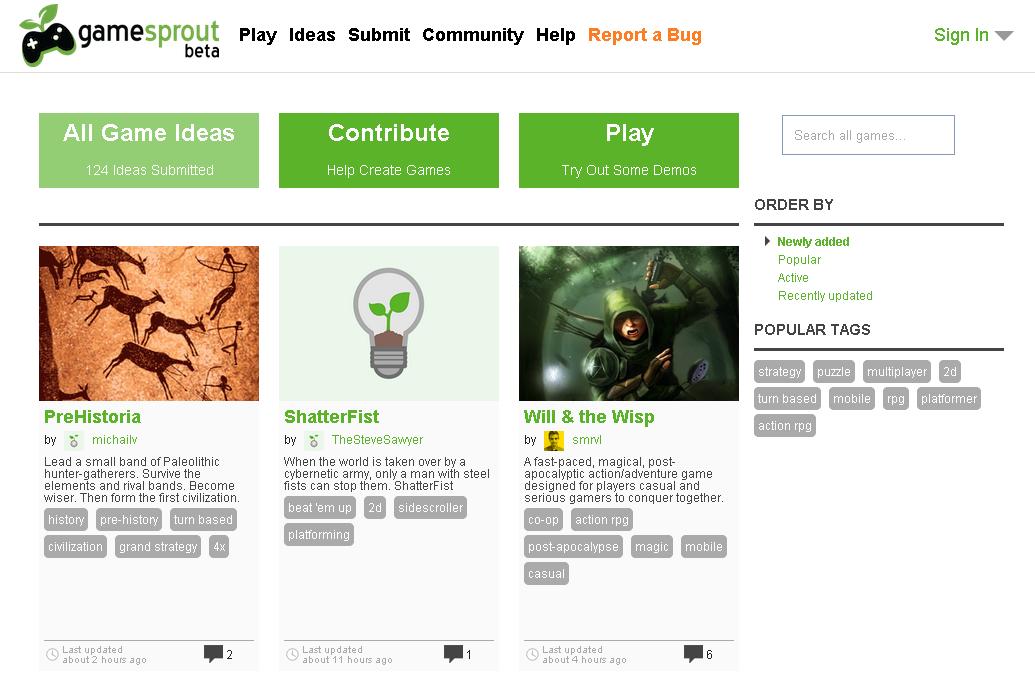 According to Schell, many artists, animators, engineers and designers — both amateur and professional — have signed up to help with projects that interest them. There are even teams of indie developers who are developing games openly on GameSprout because they want the regular feedback from the community. Developers from Schell Games also play a mentorship role, offering advice and feedback on pitches. When a pitch doesn't receive much attention from the community, Schell Games advises on what the developer could improve on so that their idea gains more traction.

The studio is currently looking into three possible ways of making GameSprout financially sustainable. It could enter publishing deals with the developers that have their games on GameSprout, it could introduce a subscription model that would give paid members access to more tools or it can look for sponsors. But Schell says that finding funding isn't the primary objective at the moment.

"We're sort of taking the attitude of none of that stuff matters if we can't get a community that really is showing up on a regular basis and cares about what they're doing," he said. "This is something we're doing because we believe in it. We believe that this is something that people need and want.

"We feel that sooner or later, we're going to figure out the right way to make this pay for itself and be sustainable."

How to unlock all the Overwatch 2 heroes

All the new Overwatch 2 heroes and what they do