Madden NFL 25 is a celebration and, in a weird way, a culmination of the most long-running annual franchise in gaming history.

The "25" refers to the game's milestone anniversary. When the EA Sports guy yells at you (for the 3,873rd time) that "IT'S IN THE GAME!" at the opening of Madden NFL 25, it's for better and worse: NFL players have asses of varying size, NFL coaches are looking to college for offensive innovation and NFL owners worry about things like marketing and merchandise.

Whether it's load screens dripping with nostalgic screen grabs from the previous 24 releases, or modes that allow you to build and draft teams of legendary NFL players, Madden NFL 25 celebrates the hell out of Madden throughout the game. And somewhere in there, developer EA Tiburon has built a more approachable game of football than it has in years — even while Madden NFL 25 gives a giant foam hand pat on its own back.

Madden NFL 25's look is pretty consistent with previous years — player movement still (rightfully) feels like a game, rather than completely smooth human mechanics, and crowd animations aren't the best. But nothing looks too wonky or distracting.

Yet Madden NFL 25 makes a number of mechanical tweaks and modifications to player behavior to make the action feel like a video game. It seems like a strange statement, but this isn't always the case for Madden releases. Running is more responsive for every ball carrier (including a smoother-than-ever read option feel), and QBs have plenty of time to pick apart a defense. Simulation sticklers who demand a minutiae-oriented, difficult take on NFL football might find this shift to playability abhorrent. To me, it makes Madden NFL 25 one of the more accessible releases in the series, as it takes advantage of the NFL's trend of mobile QBs and wide-open offenses.

Don't misconstrue the above, though — important elements like customizing playbooks, audibles, pre-snap adjustments and shifts are all there. But in running through a number of games, both alone and against others, Madden NFL 25 felt more fun than usual. And I say this as a longtime Madden and NCAA Football fan.

Even though the not-exactly-hidden objective of the designers is not to replicate the football experience, but to replicate the TV football experience, the standard, pulled-back camera angle is as close to the angle coaches see in their tape study as any of us are likely to get. It's a nifty way of getting the best possible sense of the unfolding play, without losing too much detail.

Back to the TV experience for a second, though — if you let the game play out its carefully crafted pre-game animations, it all goes way over the top. It's fun to see stadium traditions and hey, everyone likes a good flyover. But it's also "SNICKERS SNICKERS SNICKERS" everywhere, and there's a good chance that pixelated CBS broadcaster Jim Nantz will haunt one of my dreams at some point. I actually expected Nantz or analyst Phil Simms to promote an all-new NCIS: Los Angeles at some point and was a bit disappointed when no real-time marketing was anywhere to be found. Next year!

There's only so much EA can do within Madden's gameplay from one release to the next; there are new running moves, plays, tackling and stumbling animations, etc., but it's the full franchise mode — now called "Connected Franchise" — where the features are generally the most dramatic. In 2013, Madden's Connected Franchise mode means creating a player, coach or owner from scratch and seeing seasons and careers through to their logical conclusion. In player design, I got to debate how big to make my stomach, calves, thighs and yes, just how ample Dan Rubenstein's ass could be. The player option is fun — running around an NFL offense as a custom offensive skill player and trying to become an All-Pro fulfills a rather basic but still cool dream. 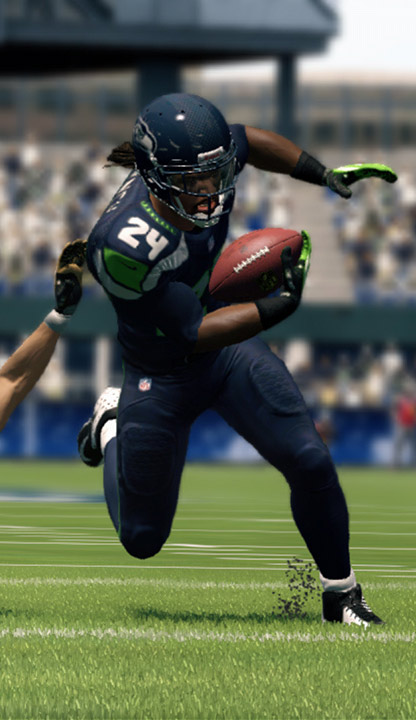 To a certain extent, the coaching option is fun — after all, the shaping of a team is what makes fantasy football such a big deal. But I found finite entertainment in administrative aspects like tinkering with rosters, trades and drafting. I can respect the craving for total football control, but an hour determining strategies and scrolling through and rearranging names felt like busy work, even to this football nerd.

And finally, you can create a tycoon version of yourself who owns and controls the business of an NFL team. This means, first of all, designing your physical self and then making decisions regarding press conferences, marketing and fan popularity. If your eyelids slowly grew heavy reading that, it's for good reason — it's a tedious endeavor, unless you have the time and inclination to challenge yourself to care about how ticket prices will reflect upon franchise popularity.

Madden NFL 25 is as fun to play and enjoyable as any ultra-modern sports game could hope to be while still toeing the advanced feature line. The NFL itself breeds die-hards who need every tiny option at their disposal and casual fans happy to enjoy some healthy competition. While Madden NFL 25 does an admirable job of catering to those with little use for, say, the ability to make 14 changes before each snap, it stays true to its ethos to give you as much control as you could possibly want. Asses and all.