Puppeteer breaks the fourth wall with actors, not characters

Share All sharing options for: Puppeteer breaks the fourth wall with actors, not characters

Puppeteer's theatrical setting, moving backdrops and cast of colorful puppets have been the focal point of the title's promotion since its announcement at Gamescom last year, but the depths of the game's theatrics go deeper than you might expect.

Director Gavin Moore told Polygon during an interview at Gamescom 2013 that the stage upon which the game is set isn't just a clever aesthetic; in many ways, Puppeteer is a piece of virtual theater. The way that setpieces move is all given careful consideration for how actual sets are maneuvered during a play. Visual effects, like rain or snow, aren't real, as falling rain would ruin a real-life production — instead, they're just lights projected onto the stage.

The most interesting facet of the games theatrics, however, are the characters themselves. See, they're not actually characters, Moore explained.

"What we always decided was that we didn't have characters, what we have are actors playing characters," Moore said. "When we were writing it, we were treating them like real people, like real people playing roles. So, it's kind of funny, because that led on to the idea then, of how we could really muck around with what goes on in the theater.

"From the start up screen, you can hear the narrator announcing things like, 'Please turn off your mobile phones, because we don't want to hear your flashy ringtones during our stupendous show,'" Moore said. "But you can also hear actors behind the curtain saying, 'Who's going on first, I've forgotten,' or 'What's my line,' or that sort of thing." 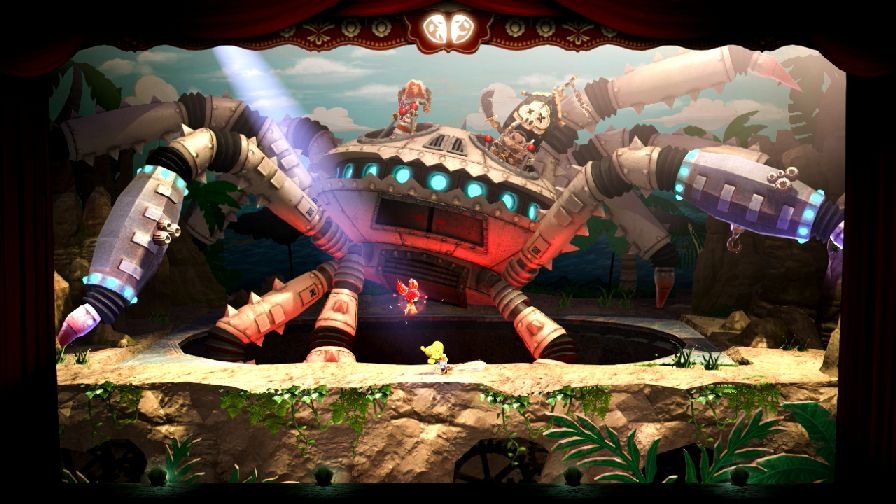 The fact that the characters have fictional actors pulling the strings, as it were, becomes much clearer to the player as the game progresses. Lines and cues are dropped. The fourth wall is frequently broken. The narrator and the leading lady, Picarina — or rather, the actress playing her — have a running rivalry that mounts throughout the game's seven acts. The unpredictability and native surprise of live theater surfaces often in Puppeteer.

"There's one actress who's a stand-in, because the main actress is gone sick, and she's an old kind of lovey, Shakespearian actress," Moore explained. "It's all just over-the-top acting, and the leading lady Picarina can't stand it. She's actually talking off the side to the stage manager, Bill, asking, 'What happened to the other actress? God, who's this, she's terrible!'"

Japan Studio also recreated the sound of a live theater performance by renting out a London theater, filling it with extras and recording their reactions using an omnidirectional microphone rig.

After creating the theater, all Japan Studio had to do was to decide what to do with it. Given the nature of theater, Moore said, their options were limitless.

"For me, Puppeteer is not the story of Kutaro and his fight with the Moon Bear King," Moore said. "Puppeteer, the actual IP, is that theater. I think we could do anything in it."