Command & Conquer will have shorter matches, may have starter packs

Share All sharing options for: Command & Conquer will have shorter matches, may have starter packs

The changing nature of real-time strategy gamers means that when Command & Conquer launches this fall the game's matches may not be the same hours-long battles that long-time fans of the franchise may remember.

"We've been noticing since the original Generals, the preferred play session has gone done from an hour plus to 30 to 45 minutes," said Jon Van Caneghem, general manager of Command & Conquer developer Victory Games. "So we've changed the pacing [of Command & Conquer] to deal with that."

But fans of those victory-by-attrition, lengthy matches shouldn't be too worried, Van Caneghem said the development team plans on giving gamers into those longer matches options to lengthen play through map design and scenario choices.

Command & Conquer launches this fall as a public beta, but Van Caneghem said it will likely never see an official "retail release." Instead, developers will continue to iterate on the free-to-play game and release patches.

The benefit to that system, he said, is that it means they can do things like release a full episodic campaign post launch, without having to worry about trying to get it on a disc.

The first campaign, announced earlier this week during EA's Gamescom press conference, will focus on the fiction of Command & Conquer: Generals. True to that game and its world, there will be no live actor cut-scenes. But Van Caneghem says he's aware of the intense interest fans have in seeing the campy live-action cutscenes found n some of the other Command & Conquer games.

"I think it will happen again," he said.

When the game hits it will play like a reworked, in some way rethought, version of 2003's Generals. The game's content is evenly split between three types of inspiration. A third of the of the units will be favorites from Generals, a third will be units from Generals that have been reimagined and a third will be entirely new, Van Caneghem said.

The biggest change to the game, beyond the promise that it will receive long-term support with plenty of new content and patches, is the introduction of monetization.

Van Caneghem said players won't be able to spend a penny while in a match. And the game also won't restrict how frequently you can play with some sort of timer. Instead the game is following the monetization of both World of Tanks and League of Legends. Everything will be unlockable through experience earned, or players can purchase generals, perks for those generals and other items. EA will also sell a premium service that will give players extra credits, the ability to earn experience faster and access to more variables and settings in the game's set-up stage. 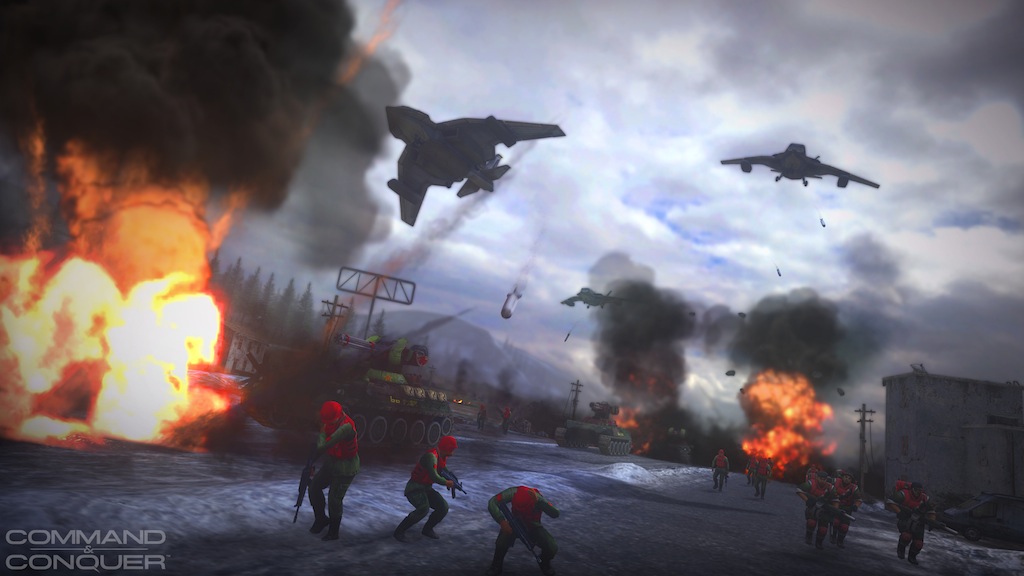 Van Caneghem said that while the long-tail nature of the game makes giving gamers the option to do a one-time unlock purchase, EA is considering selling starter packs.

"We are toying around with starter packs," he said. "Maybe selling them for $30 to $40 and including a half-dozen generals and some currency. That would be for players who don't want to start from scratch and don't want to be a totally free player."

Van Caneghem said the cost for items haven't been determined yet. It's something they need to do some playtesting with, he said.

My time with the online-only game seemed to back up everything Van Caneghem was saying. I never had the opportunity to spend money in the two matches I played. Once started, there was no way to tell that the game was free-to-play or that it included monetization.

The game felt like a slicker looking, faster playing version of Generals. In one match against AI, I was able to steamroll the opponent with a mix of ground and air units.

In the second match, playing as the much more difficult GLA, terrorism-based faction, I was steamrolled by a developer. Both matches lasted 15 to 20 minutes.

Generals made quite a splash when it hit in 2003, in part because its use of terrorism tactics, suicide bombers and car bombs, seemed to legitimatize that aspect of war.

Now ten years later, Van Caneghem said news that the game would include those sorts of options and units didn't seem to raise any eyebrows.

"I think we've had a lot more time since those events were as shocking to people," he said. "It's under the radar."

Victory Games did make some minor tweaks to, perhaps, make the aspect of terrorism in the game seem less focused on the Middle East. In this latest Command & Conquer, the Global Liberation Army isn't just drawn from the Middle East.

"It's radical groups from around the world," Van Caneghem said. "Any insurgent types in any country we looked at them as a possible general. It's a worldwide thing now, every country has groups like this."