Lions, chariots and naumachia: The things that almost made it into Ryse: Son of Rome

Share All sharing options for: Lions, chariots and naumachia: The things that almost made it into Ryse: Son of Rome

Ryse: Son of Rome's multiplayer gladiatorial spectacle once featured sea battles and could have had wild animals and chariots.

The naumachia were massive naval battles first staged for Julius Caesar in Ancient Rome. They were among the bloodiest combat for entertainment that occurred in the era, often featuring thousands of prisoners of war fighting to the death.

Ryse's multiplayer takes place in a massive colosseum with sections of floor that can drop away and rise up to switch out elements of the battle. The changing nature of the colosseum is a nod to the reality of those ancient blood sport, which included everything from one-on-one gladiatorial fights to reenactments of famous battles, to chariot races and wild hunts.

While Ryse's colosseum does include things like a barbarian village, and even flooded map tiles, it doesn't include some of those more bizarre and extravagant elements of the real blood sport of Ancient Rome. But the developers did look into introducing them.

"We did some playtesting with sea battles," said Erik Olsen, Ryse's multiplayer producer. "It was a great concept. It just didn't play well."

The same was true for including chariots and wild animals.

"We have created a pretty fat stack of documents of what we wanted to do," Olsen said.

What's left in the game is still a stunning recreation of combat and death for entertainment.

The colosseum of the game's multiplayer, a cooperative-only affair, is a "Roman holodeck" of sorts, allowing the developers to create intricate maps all within the confines of the venue. 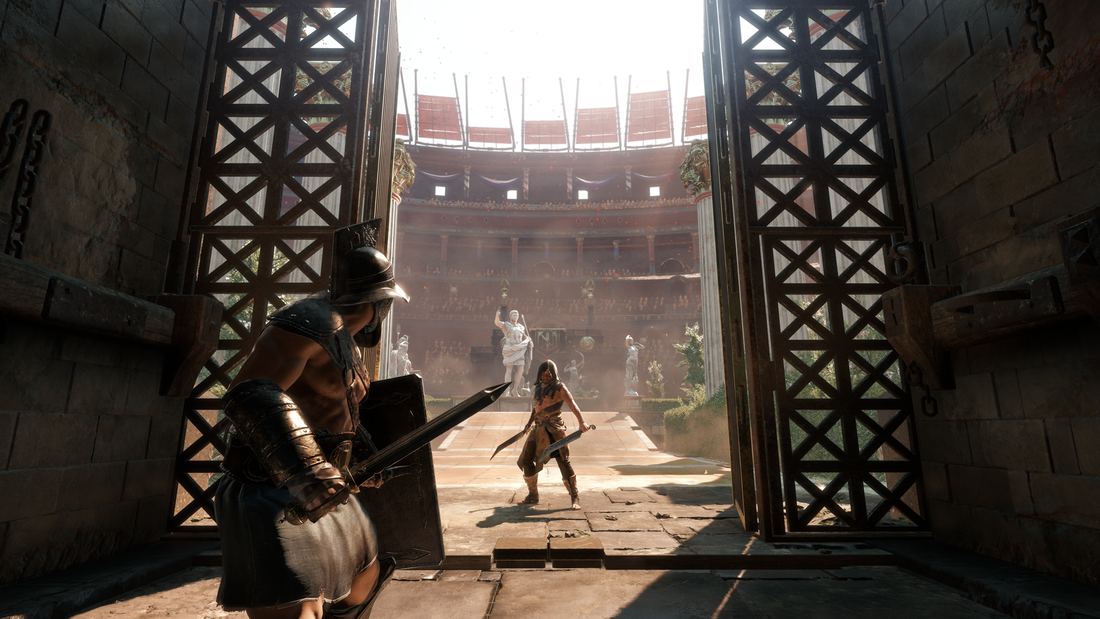 Players stand together, taking on increasingly difficult hordes of enemies. While the combat for the mode is essentially the same as what's found in Ryse's single-player, there are a few minor differences.

For one thing, there are microtransactions. Also at the beginning of a match a player chooses one of four gods to fight for. Once they build up enough kills in the battle, they can invoke their god's special power.

Players can still deliver flashy, brutal finishes, but the mode also adds the ability to do cooperative finish moves. For instance, two gladiators skewering a single enemy at the same time in the chest and back, to kill him.

And the mode isn't just about killing barbarians. There are also dynamic objectives dropped into a match.

My time with the mode, played with a developer by my side, opened up with two gladiators walking out into the sun and sand of the colosseum.

The air was filled with confetti, an announcer proclaimed our entrance.

Turns out, both are interactive features of the game. A symbol at the top center of the screen shows the mood of the audience, from excited, to annoyed, to amused, to bored. That mood is set by how well you dispatch enemies. If the crowd turns against you, they start pelting you with vegetables. The overall mood of the audience during your match also impacts the experience you earn.

The announcer delivers a running commentary of your performance, talking up the setting, your enemies, even detailing the encounter being reenacted, as you battle. If you do well, he says nice things. If you flub your kills or get hit, he mocks you.

Our first battle had the two of us taking on waves of barbarians in a traditional sand-filled colosseum. Occasionally chunks of the floor would slide away, to be replaced by spike traps, or areas filled with burning oil. 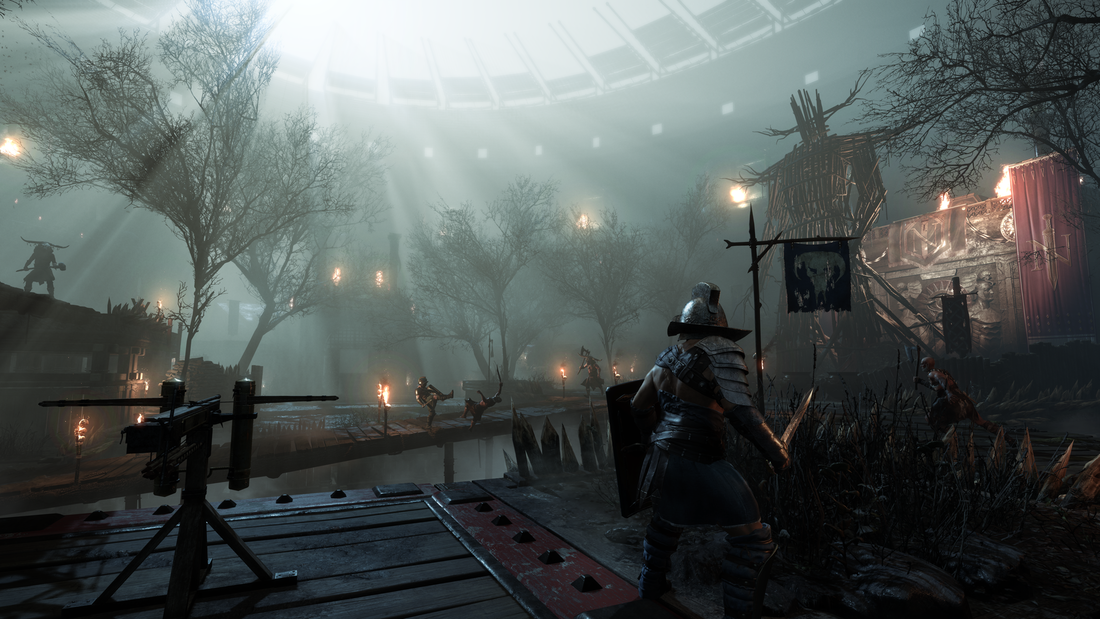 The second encounter took place in a meticulously detailed barbarian village set up on the floor of the colosseum. We fought inside the rough-cut timber walls of a fortified village, trudged through calf-deep water and eventually stormed a small fort, burning down the encampment and killing the enemies within.

When it worked, gameplay was rhythmic, exhilarating, but bugs plagued the build we were playing. Trying to land finishing moves was sometimes complicated by a lack of indicators, showing you which button to tap. Or the camera angle would slide into crazy points of view, making it impossible to see the enemy you were trying to cut down.

It happened enough to frustrate the experience, but the developers present said the entire team were actively working on polish of the game.

When it behaved, an interesting tactic began to emerge. In my first play-through of the two modes, I cut through enemies, blocking, shoving and hacking away at the barbarians until they fell. During my second play-through, I worked at getting multiple enemies to the point of a finishing move, and then attempted to string together those flashy kills. The end result were dozen-long strings of attacks that tore through the enemy and amped my score.

The tactics of not just killing an enemy, but dispatching him with style is an intriguing element to the game, especially when coupled with the chanting crowds and enthusiastic announcer.

I wasn't able to check it out during my demo, but the developers tell me that the game will also include an editor that will allow players to quickly put together a map of challenges and objectives. The map can be floated online for a set period of time and can even have caps on the length of a play session.

The more people who compete in a player-created challenge, the bigger the reward. Crytek developers will also be keeping an eye out for the best, to flag them for the community.

The end result is a game packed with stunning visuals, on the cusp of delivering an engaging, frenetic experience, if only those bugs can be fixed.

Patrick Esteves, design director on Ryse, understands the reticence to fully embrace the game when it still has some issues, but he's sure they'll be fixed by the time the game launches.

"This is going to be the best looking game on the Xbox One," he said.