Watch Dogs' hacking functionality is slickly implemented in the game, adding a unique twist to stealth segments and car chases when used properly by the player. Using your powers incorrectly, though, can still be pretty damned fun.

During a hands-on demo at Gamescom 2013, I was given control of a relatively powerless Aiden Pearce — having not yet hacked the local ctOS terminal, Pearce wasn't able to access the network from which he draws many of his technology-driven power. To gain that power, I had to find the terminal on my map and hack it locally; though the access point was heavily protected by armed guards.

Tackling these access points felt very similar to conquering the strongholds in Far Cry 3. Running in guns blazing is a noisy, dangerous option; instead, you have to tag them using their own security cameras. Running a hacking relay between cameras — you can hack any camera you see, then jump to any other camera or device in that camera's field of view — is genuinely very neat, adding a layer of puzzle-solving to these break-in sequences.

After successfully and stealthily taking over the terminal, I made the unwise decision to hack a forklift I was standing next to, fully exposing myself as it lifted the cargo I was hiding behind. Thankfully, I managed to get the drop on the guards and, using the game's slow-motion "Focus mode," was able to kneecap my way out of the situation.

My newfound access allowed me to profile individuals, giving me intimate details about their personal lives and, more pressingly, their bank accounts. After ripping off a few high-value targets, I withdrew my illicit gains at an ATM, then hacked my way into the seat of a sleek sports car. Driving actually feels pretty great in Watch Dogs; each car I drove during the demo had a distinct handling and feel. The input from Driver: San Francisco developer Ubisoft Reflections definitely shines through when Aiden's behind the wheel. 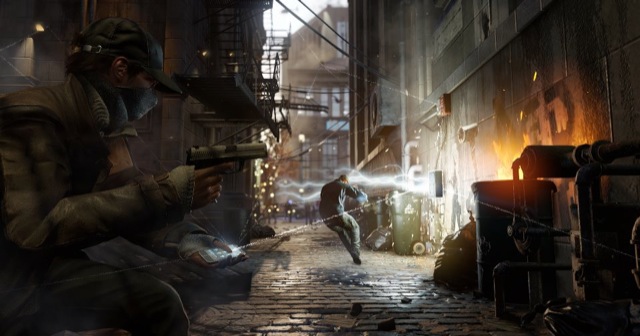 My crime spree was interrupted by a hacking attempt by another player in my demo session. The way this process works is simple: At any time while looking at a map, you can overlay a grid on that map, showing players whose worlds you can hop into. After getting within a few dozen meters of that player, you initiate the hack and walk away quickly. Once you stop moving, you start downloading the player's data — you have to stay within a small radius of where the download starts, though, establishing a hunting ground for the hacked player to look for you in.

There's touches of Assassin's Creed multiplayer going on here. The player who initiated the hack is disguised as a random avatar on the street, and can easily blend into the crowd. The hacked player can profile people on the street to weed out the hacker, so it makes sense for them to stay out of their crosshairs. If they can finish the download and get away, they'll turn the hacked player into a slave in their network, gaining access to everyone they've ever hacked, further building their reputation.

It was a really cool, dynamic moment, and the very last thing that happened before my demo went batshit.

In an attempt to be a good citizen, I attempted to shoot a fleeing robber who came barreling out of a nearby gun shop. I turned on slow motion, and quickdrew on him — but I accidentally killed an innocent bystander in the process. Quickly, a few witnesses began calling the cops, and although my cell phone jammer was able to cancel out a few of them, it couldn't completely cover up my crime. 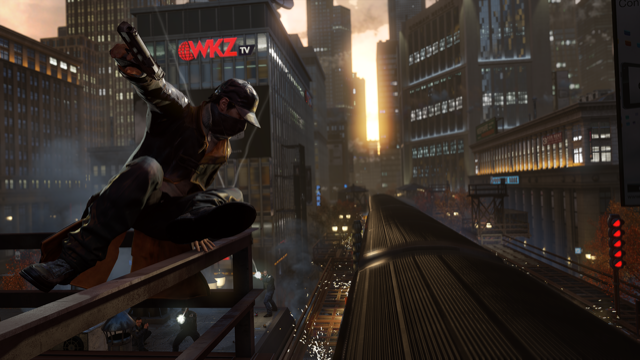 Taking out pursuing cops by hacking traffic lights, activating barriers and raising bridges is basically the sweetest thing ever. Ramping a drawbridge and watching the cops behind you fall into the river is super satisfying. Covering your tracks by causing a major accident at a busy intersection is rad, and is accompanied by a Burnout-esque crash cam to show your accomplishment. Raising a barrier seconds after passing it and watching five cop cars go flipping over it — it's exciting, and empowering in a very real way, considering the almost-actual tech that goes into it.

Here's the thing: It's also super entertaining to totally botch your hacking escapes. My demo's spectators were kept in a state of near-constant laughter as I destroyed car after car by activating barriers a second too early, or creating an unnavigable intersection, or by failing a poorly-timed drawbridge jump. My ultimate demise came at my own expense: While evading the cops on foot, I hacked the traffic light directly overhead, creating a sedan dogpile with Aiden at the bottom.

Watch Dogs is shaping up to be a culmination of lessons learned by Ubisoft in the open world genre — it's got elements of the handling of Driver, the structure of Far Cry 3 and the multiplayer of Assassin's Creed. It's not just a one-trick pony, exploring the possibilities of hacking and doing little else. It's taking a lot on, and its got some pretty great pedigrees to back it all up.