Share All sharing options for: DriveClub's social challenges built around potential for virality

Virality is a force that countless content creators and web aficionados have tried to tap into to help their products find an audience, but DriveClub developer Evolution Studios hopes to use it to build an in-game online community.

The content that Evolution hopes to actually make viral are user-generated challenges, which make up much a majority of the game's multiplayer component. Challenges allow you to create an event from scratch, choosing a game mode, tweaking its rules, picking a track, restricting available cars, selecting the time of day and how quickly time passes, among other settings. Then you do that event yourself, set a time or score, then send it to your friends or your club to see if anyone can best you.

The challenge doesn't disappear after those players make their attempts, however; it lives on, and can be shared, found in a search, promoted by Evolution or — using viral features inspired by YouTube and some social network sites — can build steam by player endorsement.

"In the game, the way it works is, we can push different activities to different people's feeds, and you can choose to like that or share it," design director Paul Rustchynsky told Polygon following a Gamescom demo. "When someone likes it, it more commonly appears in more people's feeds, and as you share it just grows wider and wider, up until the point it goes viral."

"On top of that as well, the new features of the PlayStation 4 enable the propagation of that, as an experience, to spread out — like a live stream, for example," game director Col Rodgers added. "You can actually watch challenges going on, and see people playing those challenges, see what that experience is like, and just dip your toe in whatever you fancy." 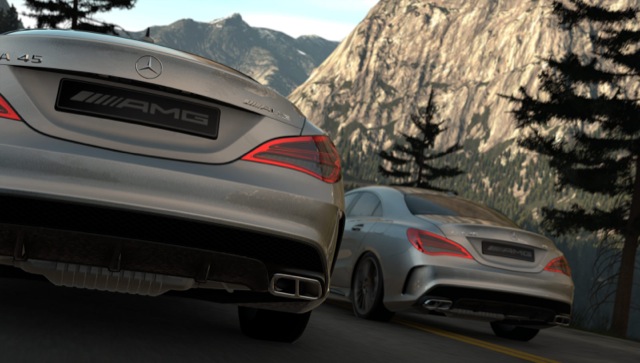 Challenges' long lifespan also allows DriveClub's late adopters to play alongside their friends who may have started much sooner. They can even compete with friends who have long since quit playing DriveClub — if they can manage to beat their times, those lapsed players will receive a notification through the DriveClub app, potentially goading them into rejoining the title.

"Because challenges can be sent to friends, or to clubs, and can live on after that and go viral, it allows you to join the game two weeks after all your friends have joined it, because they've been bouncing this challenge back and forth," community manager Jamie Brayshaw said. "You don't actually miss out, you can still take part in that. It's quite powerful."

Even if your more experienced friends' ghosts still smoke you, there's opportunity for growth using DriveClub's progression engine. Each Challenge has an overall goal set by its creator, but periodically during the event, you'll be given the opportunity to compete in optional "face-offs." These tasks are dynamically generated, challenging you with drifting a certain distance past a corner, achieving a certain average speed through a long straightaway or sticking with a specific line through a winding path.

The targets from these challenges come from actual players that have attempted the face-off in the past, which the game attempts to match up against you based on player skill. It's a way of making players that have been left behind by their friends still feel like they're accomplishing something in their challenge attempts.

DriveClub launches alongside the PlayStation 4 on Nov. 15 in North America. A free, content-limited version of the title will be free with a subscription to PlayStation Plus.