Sucker Punch has utilized the PlayStation 4 hardware to do things it simply wasn't able to do on current-gen hardware, director Nate Fox told Polygon during a Gamescom interview; things like realistic city-building and touch-based controls.

The Infamous series is known for its open-world "urban playgrounds," environments that allowed the games' super-powered protagonist to climb buildings, wreck cars and grind subway rails. In Infamous: Second Son, that living world can be bigger, more detailed and closer to Seattle — Second Son's real-world source material, and the city where Sucker Punch is based.

"Because we live there, we can make it extremely real, it feels like a place that exists," Fox said. "With the PS4, we can bring in a lot of detail, and textures and lighting effects that you totally buy. On top of that, you add the super powers, and you believe more that it could happen."

"...we just wanted to call it like it is, which is Seattle."

Sucker Punch isn't beating around the bush with the naming of its in-game city. The original Infamous took place in Empire City, a metropolitan environment loosely modeled after New York City, and Infamous 2 was set in New Marais, which was closely modeled after New Orleans. There's no fictional name for the setting of Second Son, Fox said.

"Oh, yeah, we're calling it Seattle," Fox said. "It's got the space needle in it! We made New Marais and it was certainly largely inspired by New Orleans. When we decided to put the new game in Seattle, we just wanted to call it like it is, which is Seattle."

Like the previous games, though, Sucker Punch isn't striving to recreate its home city on a 1:1 basis. The studio has taken creative, necessary liberties to make Seattle a fun place to exercise your powers within.

"There is one thing that's a bit different from our Seattle, the one that I call home — we didn't lay out the streets to be an exact duplicate of Seattle," Fox said. "We laid out the streets and made the buildings to be a great game. We wanted to make sure that it was dense, with a lot of places to discover and explore, and ways to use your powers. We prioritize fun over a complete 1:1 recreation." 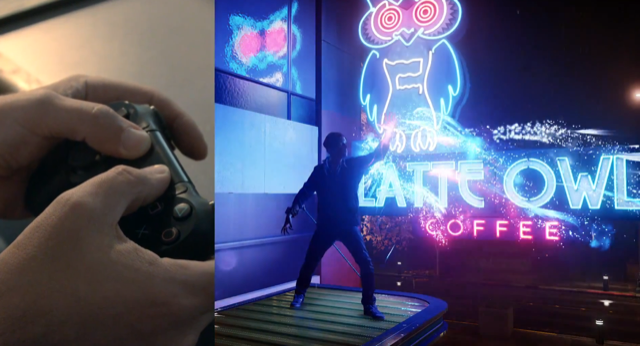 The more surprising addition that the PS4 hardware allows are context-sensitive actions that the player conducts using the DualShock 4 touchpad. Our demo showed protagonist Delsin Rowe passing through a security checkpoint, requiring him to perform a DNA test by placing his finger on a scanner; an action the player simulates by placing their finger on the correct part of the touchpad. Other actions are more common; stealth kills, for example, require players to put their thumbs on both ends of the touchpad — perhaps to simulate the violent act of strangulation.

It's a strange addition, considering the fluidity of the series' locomotion and combat — wouldn't adding touch controls toss a monkey wrench in that flow? According to Fox, gesture controls are more about adding variety to the core cycle of flame-throwing destruction.

"You have these big moves, bread and butter awesome gameplay things; that's joystick and button territory," Fox said. "But when we wanted to do something a bit more subtle, something that's a bit more personal, we go to the touchpad because there's a fidelity of control. Frankly, it's a good change of pace. It kind of resets you on the bigger things. That's kind of how we draw the line on when we do the touchpad and when we go for huge effects.

"When you're making a game, you're trying to make a lot of verbs; that's the word we use," Fox said. "I can jump, I can blast — doing something small, like in the demo the other day, Delsin having his DNA scanned; we use the touchpad to recreate that verb of 'finger scan' that the player gets to experience, and bring themselves closer into being Delsin. It's something we can't do unless we have a new method for allowing you to be that verb."