Cerny: Making Knack difficult is easy, and making it easy is difficult

Share All sharing options for: Cerny: Making Knack difficult is easy, and making it easy is difficult

Knack, the PlayStation 4 launch title from SCE Japan Studio, is a platformer that hopes to satisfy all audiences across the gaming spectrum — from hardcore players brought up on challenging classics to newcomers of all ages.

During a Gamescom 2013 demo, game director and PS4 lead architect Mark Cerny showcased how it manages to meet those two opposing demands. There are three difficulty settings in the game, scaling not just combat and survivability to meet players' skill levels, but platforming challenge as well. New players can also be assisted using an asymmetrical co-op mode, letting another player assist Knack in combat and exploration.

Speaking to Polygon following the presentation, Cerny explained that delivering on the expectations of newer audiences is a much larger obstacle than catering to a more talented crowd.

"Making a game for the nostalgia-core player, people who played Crash Bandicoot or the like back in the day, that's not that difficult to do," Cerny said. "It's rather easy to make a gamer harder. Really, the challenge comes in making a game that somebody who's picking up a DualShock for the first time can play.

"It's rather easy to make a gamer harder."

"There's a number of issues. One of them is that there's so many buttons on a DualShock. Another one is, unless you play games, judging distances in 3D environments is very difficult. So, we had to change our approach. In Crash Bandicoot or Jak and Daxter and the like, if you bump into an enemy, you instantly take damage. It turned out that people who don't know how to play a video game will bump into enemies all the time. It's very hard for them to figure out how far away they need to be to do their attack. So we changed it around — it's never damaging to touch something, it's only damaging when the attack comes.

"I know that doesn't really sound like much of a change," Cerny added, "but it really was essential to our strategy for the light and beginner players."

Japan Studio implemented the co-op mode in Knack after the team began to realize the game's identity as a family-friendly project. It's more of a "bonus feature" than a full mode, Cerny said, conceptually comparing it to the Co-Star mode from the Super Mario Galaxy series. 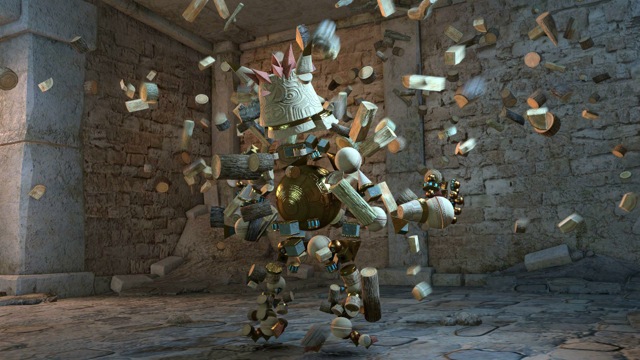 If Knack manages to achieve that broad appeal that Japan Studio envisions, it seems likely that the franchise and character will be remembered for being more than a PlayStation 4 launch title. I asked about Knack's potential to become a mascot for PlayStation in the next-gen, but Cerny thinks that gaming has grown beyond all that.

"PlayStation has never had a mascot," Cerny said. "Though it is true that Crash Bandicoot was the top-selling brand on PlayStation One, hard to believe. I think that we're well past the era when a character will represent the platform. There's just so much diversity in what's going on on the platform.

"If you look at the NES, Mario was terribly central to what was going on with that. It was very natural to have a connection between that and the hardware. That was very natural with Sonic and the Genesis — or I should say, the Mega Drive in Europe. I mean, I was part of Sega at that time, and our sales of the Master System went up by a factor of five in just six weeks, between a price drop of the hardware and releasing that title. That's how big Sonic was for us. But I think once you get outside of those examples, there hasn't been any equivalent where that character has been so central to the platform."

We may not be able to return to that era, Cerny said, but he's hoping that Knack will help the PlayStation 4 return to the brand's roots; back when experimentation and imagination characterized the original PlayStation's library.

"For me, I've been part of PlayStation since the very early days," Cerny said. "There was this magical time when Crash was out, and Parappa was out and a couple other titles that were quirky, and creative, and there's just this — I've been calling it the "joy of play" in the press conferences. And I know that the market has evolved, and that it's much more about the mature core gamer these days; but at the same, I'm trying to add a touch of that feeling into the platform at launch."