Rayman Legends is a devious, impeccably crafted platformer, wrapped up in cheerful clothing.

There isn't much of a story — Rayman and friends ("heroes" in Rayman parlance) must save adorable characters called "teensies" from an army of... evil creatures. The premise is nothing more than an excuse to throw dozens of intricately designed 2D courses at you, and that serves fine. There are five main worlds here, spanning storybook castles, a land inspired by a manic Day of the Dead party, an undersea world that recalls a cartoon version of BioShock’s Rapture and more.

Each world has a number of regular stages, a boss fight, and a "musical" stage, which plays like a race set to music. In every stage — including boss battles — you need to collect lums and find and rescue teensies. Some are in plain sight, some are hidden, and still others are tucked away and require you to master short puzzle sections to nab them. It behooves you to explore each level for more, since you need copious amounts to progress.

While Legends is mechanically a simple 2D platformer — you run, jump and hit things — there's a great deal of variety designed around that core. The team at Ubisoft Montpellier demonstrates a masterful grasp of flow. It manages to seamlessly combine sections of swimming, flying, stealth, combat, racing and even rhythm without missing a beat, due largely in part to Legend’s level design.

There's hardly a dull stage in the bunch. There are ridiculous races set on quicksand, a playable instrumental vision of "Black Betty," and even underwater stealth levels that balance risk and reward precariously. In one level, I had to spread guacamole to create platforms over a sea of lava, and run around in hollowed-out fruits. In another, I had to defeat a giant, rocket-shooting armored toad in a windstorm. There's more variety in some of of Rayman Legends' stages than exists in entire other games, and gameplay transitions seamlessly from section to section. 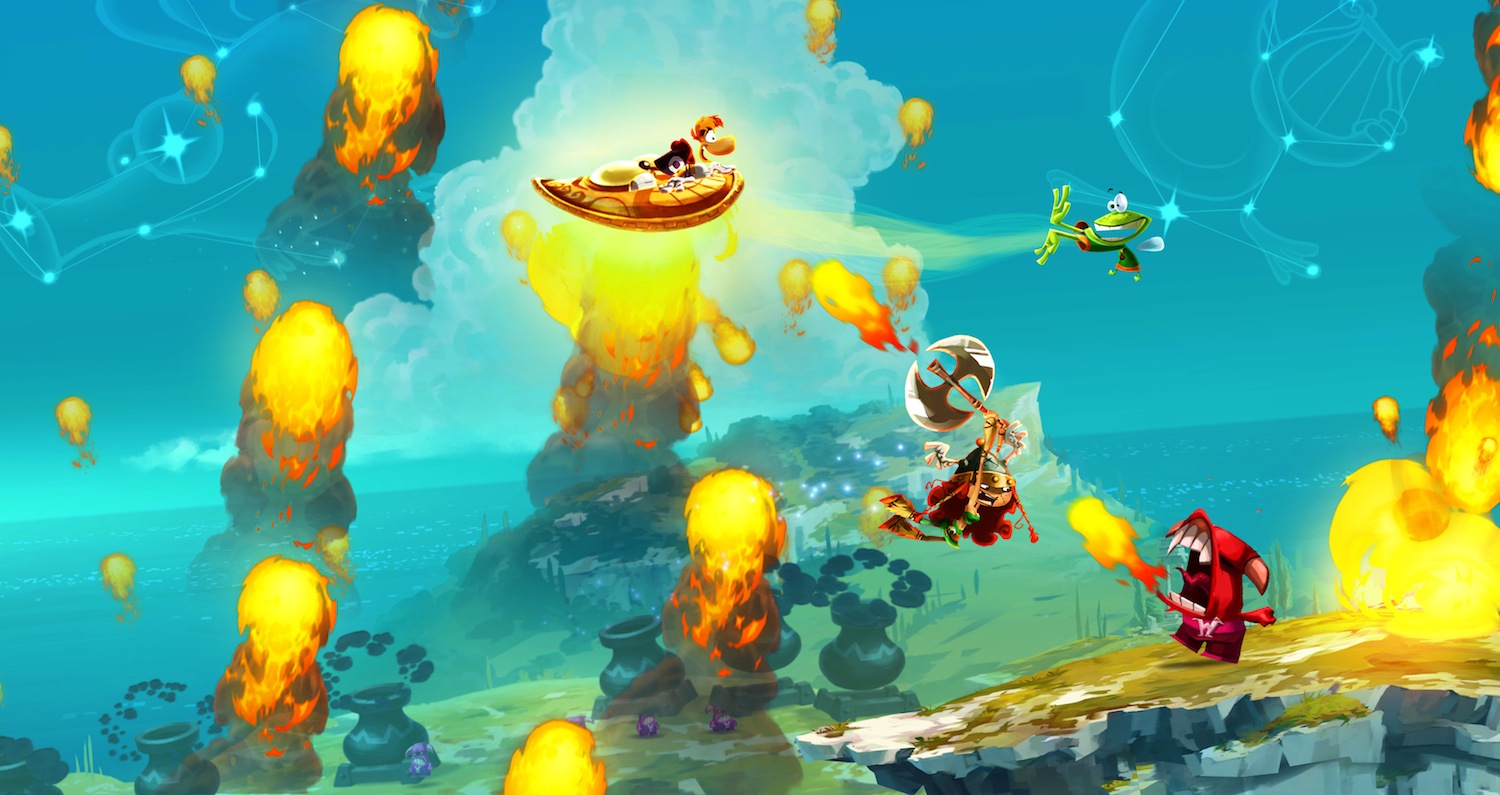 The fun stays consistent for as long as the challenge level is consistent, or at least fair. Once the game really gets going in the second world, the gloves come off and Ubisoft Montpellier's brilliant, sometimes brutal designs really start to shine. This is helped by intelligent checkpoints (though there never seem to be enough on tougher levels), and the ability to earn "hearts" that grant your hero one free hit. But Legends' mean streak shows up in special "invaded stages." 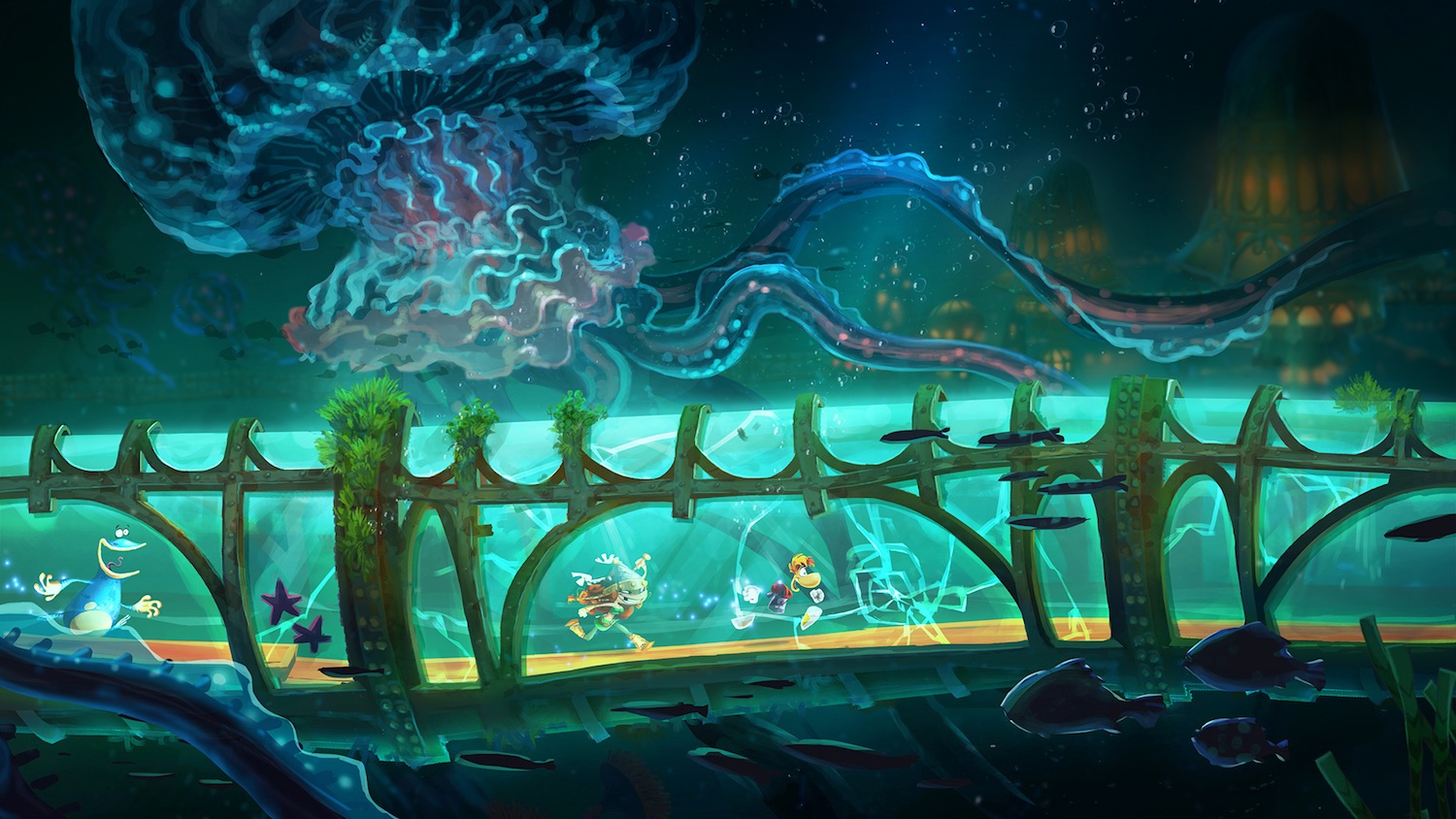 Rayman Legends is visually stunning. The art is vibrant, colorful and peppy, and the animation is fluid. Character animation in particular is a highlight, with over-the-top gestures that drip with personality. Legends looks and sounds like a living cartoon world, and the goofy themes — particularly in the Festival de los Muertes world — are served perfectly by the style.

You unlock "invaded" versions of stages over the course of the game, gauntlets that use existing stage layouts, but require you to race through them — often backwards — at breakneck speeds, with double or triple the number of obstacles. These levels are maddeningly difficult, made worse by the fact that there are no checkpoints, and no hearts. Get hit once, it's back to the starting line.

I died dozens of times on some of these courses, and some were so frustrating that I simply got bored. After restarting 25 times because I hit, say, an errant fireball inches from the end, I wasn't having fun anymore. Invaded stages play better with co-op buddies — somehow, dying dozens of times is hilarious when you do it with friends — and I found myself swearing off these levels until I had a partner to help work through the pain. Played this way, invaded stages become tough-but-fun exercises in persistence.

Rayman Legends features local co-op for 2-4 players. This takes an already frenetic experience and multiplies it by the number of heroes you have running around each stage. The game is so challenging that it's hard to hand over to less-experienced players, but there's nothing quite like the feeling of working through a brutal invaded stage with a couple of buddies. It's riotous and works beautifully, as long as you can keep track of your chosen hero.

Like Origins before it, Rayman Legends is polished, pretty and addicting. Legends has teeth — especially when it comes to invaded stages, and some later bosses almost caused me to put a controller or two into orbit. But it's hard to point to another 2D platformer that has the level of variety and quality that Rayman Legends boasts.