Killzone: Shadow Fall's multiplayer component will focus on customizable game types that can be shared, promoted and played by the community at large, and the functionality was demoed during a Gamescom 2013 demo.

The customization features aren't so different from those offered by competing shooters; players are able to set a multitude of rules, parameters, usable weapons and equipment, maps and more for their game type. Like the Warzones of Killzone 3, each game type can include multiple objectives in one match. Teams of players could be competing to bomb each other's bases one minute, then taking part in an old-fashioned deathmatch the next.

After building and naming your game type, you can share it with not just your friends, but with the whole Killzone: Shadow Fall community. If the game type gets more popular, it can become applicable for matchmaking, or promoted to every player's feed of suggested Warzones from the multiplayer main menu.

"The idea literally is that you have a couple of tabs — the Guerrilla featured ones, the community favorites, for example — we can push content in there," game director Steven her Heide explained to Polygon following the demo. "So if we find stuff that's really fun to play, or interesting, we can push it in there and let people easily find it."

Rules can be tailored to require very specific builds for players, which affords a lot of creativity, given the number of loadout options available. Characters can choose one of three classes — a lightweight scout, a heavy assault soldier or a supporter — then unlock and upgrade primary and secondary weapons, gear, special abilities and more. 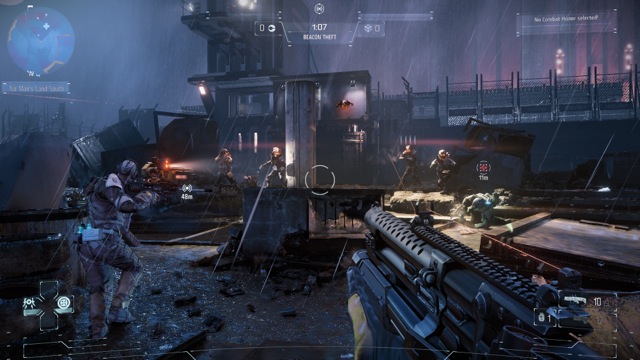 By making these choices for the player in a bespoke Warzone, some clever matches can ensue. One Warzone briefly demoed put one team in heavy armor with light machine guns, and tasked them with defending their base from the other team, equipped with invisibility powers and knives.

Creators are afforded with a lot of control, so it's almost certain that some of them will find ways to exploit the system, making clearly unbalanced game types and unfair match-ups. Even if those get promoted by the community, ter Heide said, Guerrilla's not going to get in the way of their growth.

"That's the cool thing, I think it's giving power to the people," ter Heide said. "Let them have the controls, and if they figure something out and we go, 'Well, this is way overpowered, what they've done is completely out of balance,' or whatever, but they enjoy playing it? Who are we to say that they can't? Better yet, let's find out what they find enjoyable about it and see if we can provide them with more options and expansion packs to customize it even further and get it to the state where they want it to be."

"That's the cool thing, I think it's giving power to the people."

Those paid expansion packs will increase what players are able to customize, based on feedback to the Warzones that become popular after Shadow Fall's launch.

"Expansion packs are mostly additional features, we're looking into additional weapons, character classes, that sort of stuff to broaden the experience that's there," ter Heide said, later clarifying that maps will also be added to the multiplayer post-launch for free.

"The idea is that everybody can stream what they're playing," ter Heide explained. "If you see something interesting, you kind of go, 'Oh, I want to jump in that,' and you should just be able to press a button and join that game. That's something to us that's just really appealing; it's another way to browse the games rather than looking at set pictures or descriptions, you can look at what's going on in each game, and see a feed."

Killzone: Shadow Fall launches alongside the PlayStation 4 Nov. 15. Once production on the core game wraps up, ter Heide explained, a part of the team will stay behind to work on expansions while the rest of the team will move onto the studio's new, unannounced IP. However, ter Heide said that particular project "will be a while."