Endless Space developer Amplitude Studios is taking its 4X strategy games to some interesting places with its upcoming pair of quasi-connected titles, Endless Legend and Dungeon of the Endless.

As you've probably already deduced by the number of times "Endless" appeared in that last paragraph, the three games are part of the same franchise, albeit one that's beginning to mutate across genres and themes. Endless Space, which launched last year on PC, tasked players with achieving intergalactic dominance with their budding space empire. Endless Legend shares many mechanical elements with the last title, but has shed its space setting for a classical fantasy realm.

During a hands-off demo at Gamescom 2013, Endless Legends' similarities and differences with its predecessor were highlighted. Players are still adhering to the 4X creed of "explore, expand, exploit and exterminate," building up a capital city and army and wielding shrewd tactics to achieve dominance in certain fields. Players will have to collect and mete out four resources returning from Endless Space: Food, Dust, Industry and Science.

Similarities start to dry up there. Endless Legend takes place on a hex-based map, where your army is represented by a comically large hero avatar, and your city can be expanded in all six directions, terrain permitting. Fog of war is in effect, dynamically changing depending on the height of the terrain surrounding your army; height plays a major role in Endless Legend, also affecting combat scenarios, as long-range troops have the edge on higher ground.

The game looks and, in a few ways, operates similarly to Civilization

The game looks and, in a few ways, operates similarly to Civilization. As your city accrues resources, you can spend them to build new structures and expand, assuming you have the citizens to fill your new slots. Those upgrades can be combined if you can arrange them in a certain pattern; for instance, placing six residential districts around your main city turns it into a metropolis capable of supporting much more life.

As your city expands, so does your owned region; a territory that you can peruse for rare resources and build certain helpful structures — like fog of war-clearing watchtowers — on. These structures don't have to be part of your core city, either; they can be distant warning outposts, so long as they're built in your region.

Most of the game's features, like players' abilities to diplomatically align themselves with other major and minor factions, or the battle system which blends real-time and turn-based combat, weren't demonstrated. However, the game's transformation into something a bit more accessible (even to a strategy novice like myself) was evident after just a few short minutes with the game. 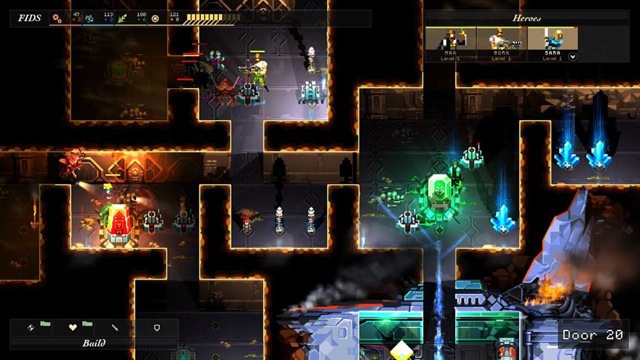 Dungeon of the Endless, the second title coming from Amplitude, attempts to blend the fiction of the two other Endless games together in arguably the weirdest way possible. You control a survivor of a downed prison space ship, which has crashed headfirst into a fantasy dungeon, suggesting the Endless-verse is one without narrative boundaries.

It's a far cry from the two games it links, though: Dungeon is a tower-defense roguelike, tasking you with exploring that dungeon while building structures to prevent waves of monsters from swarming the ship you rode in on. It's still very much about resource management; you can use food to strengthen the heroes you find during your quest, industry to craft turrets and dust to turn on the lights in a given room, preventing monsters from spawning in them.

It's a strategic experience with a climactic finale, as upon finding the exit of each floor of the dungeon, you have to retrieve the core from your downed vessel and run it to the next floor — but in doing so, you shut down the towers and lights you've been powering, turning the game into a mad dash for the finish.

It's got some great genre and game inspirations (FTL: Faster Than Light was an inspiration, and it shows) that are genuinely exciting. The project started out as a way for the developers to blow off steam after finishing Endless Space's latest DLC; but it could end up being something much more than that.