The game that translates 33 languages on the fly, including net slang

Share All sharing options for: The game that translates 33 languages on the fly, including net slang

They set out to create a limitless massively multiplayer online game and created a sort of instant babel fish in the process. Now the company behind Game of War: Fire Age is pondering adding voice to their instant, universal translation system and considering extending that tech beyond games.

The most obviously impressive thing about the iOS' Game of War: Fire Age is that it instantly translates all communications.

"Translation was more of a solution to a problem," said Gabe Leydon, co-founder and CEO of Palo Alto, Calif-based developer Machine Zone. "We were building a real-time server that could handle hundreds of thousands of concurrent players at one time. We realized that if we were creating one giant world we would need to deal with the language problem."

The solution is a system that nearly instantly sorts through slang, languages and typos to deliver something anyone can read and understand in their native tongue. And the system can translate 1,000 messages into 32 different languages in one second.

"It's a multistep process" Leydon said. 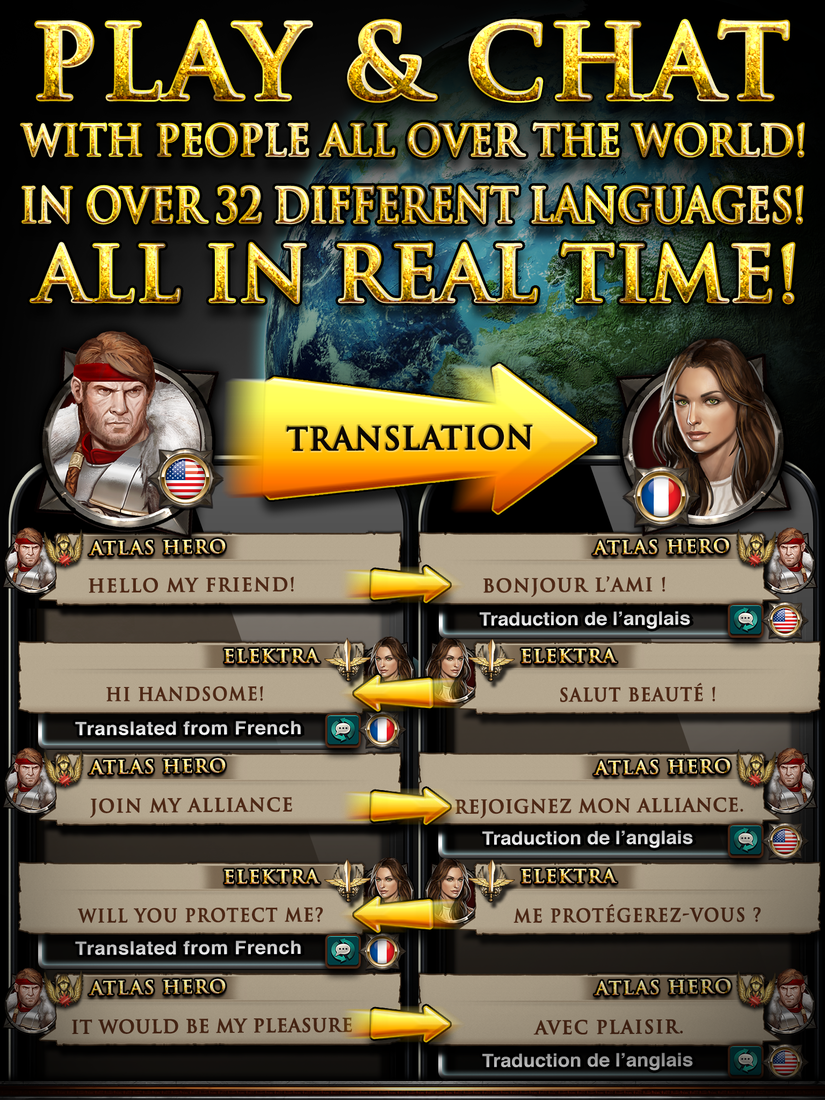 When a person types a message to someone and sends it, that text is sent through something the company calls the Machine Zone Transformer. This bit of coding takes the chat and translates it from slang and chat speak into the proper speech of whatever language it was created in.

"We have our own dictionary translation service that normalizes slang and acronyms," Leydon said. "Like ASAP, you might know what that means, but not someone who speaks Arabic. We transform that to ‘As soon as possible,' in microseconds."

Next the normalized message is sent out to Google and Microsoft, depending on the language, and it is translated into 32 languages at the same time.

"It's a full matrix, so it translates to all languages," Leydon said.

That is then sent to the player, where the game will look to see what language that person has subscribed to for the game and deliver it in the correct language. Players have the option to click on translated messages to see the original language as well, he said.

Layered over this system is one designed to catch previously unseen typos, slang or chat speak and convert it to normalized language. That system is powered entirely by the players.

"It's a side system that allows players to correct a translation for in-game rewards," Leydon said.

After the same correction pops up a number of times, the system recognizes it's a genuine issue and feeds it into the Machine Zone Transformer.

Almost accidentally, Machine Zone seems to have created a massive gamified mechanical turk for translating chat speak and identifying etymological changes in language. Their work on net speak translation has garnered the company quite a bit of attention, but not just from gamers.

"We built it to solve the single world problem and it just ended up being something that could potentially solve chat," Leydon said. "When we showed it to social companies in San Francisco, they say, ‘Stop making games.'"

The reason there is such a big interest in chat speak translation is because many services use language recognition to identify what sorts of ads to show a person, but chat speak throws a wrench in that system.

"To put it very bluntly, we can read Twitter better than Twitter can," he said. "Twitter has all of this shorthand, people are forced to spell things differently and use acronyms. Twitter based ad systems are based on understanding those posts and we can read them."

While Leydon says it's inevitable that their tech will be eventually used outside of the game, the team remains focused on Game of War, which launched last month on iOS.

In the game, players work together in a massive, persistent online world to train vast armies and capture the cities spread across a world map.

The impact the instant translation system has had on the game is substantial, Leydon said.

Gamers seem more willing to band together in-game despite language differences. People can more naturally build alliances based on interest or tactics, rather than language.

"What we see is that the really smart alliances build international alliances," he said. "They will have people playing in different time zones."

The success of the system has the company looking into adding another layer onto the system: spoken word. It would be easy, Leydon said, to take that final translation and have it spoken.

"It would be exciting to do that," he said. "We already did the hard part."