Share All sharing options for: Elder Scrolls Online is becoming a lot more like a Skyrim MMO

For one thing, you can see your own character's hands in first-person mode.

In previous builds, zooming into your character's perspective would show your attacks and powers emanating from an unknown origin. In the latest build, your hands — and the equipment they hold — are rendered in the true Elder Scrolls fashion. What seems like a superficial addition is actually quite enormous; the series first-person perspective didn't seem like that important of a characteristic for the franchise until it went missing in earlier versions of Elder Scrolls Online.

According to lead gameplay designer Nick Konkle, the change was made "largely due to fan feedback" after footage and previews of older builds surfaced. Their outcry didn't come as much of a surprise to the studio, he said, which had its own internal debates over whether a full first-person mode should be incorporated into the game at all.

"Yeah, honestly, what we didn't properly anticipate was how much it mattered to how large of a population," Konkle said. "It was one of those features that was on the fence for us. We discussed it a bunch of times, like, 'Okay, do we want to support this alternate game mode which doesn't ultimately change the experience of the game, and we're just supporting it for the people playing that way, and it's going to have a big cost to do that — all the animations, all the assets, all the updates to it.'

"Even within our company, there were questions about whether we needed to do this," Konkle said. "Once the game came out — it's funny, watching people play the game in there and seeing people, now that we have it, I'm so happy we did it because some set of people, 30, 40 percent who just play that way. Before, they couldn't, and it was a little uncomfortable for them. Now they're just happy, so I think that was totally worth it." 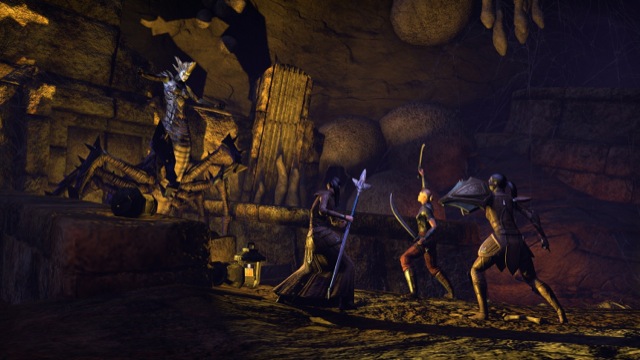 It's not the only way in which the title has moved closer to the previous game's core tenets. The world we explored — a snow-dusted island off the coast of Skyrim — was peppered with lore in the form of explorable books and notes, telling rich and completely optional stories. Quests ranged from traditional monster hunts to more clever, story-centric fare, and were all tied together by a main storyline that saw us rescuing as many of the island's inhabitants as we could before leading a mass exodus. We could end that quest at any time, leaving some denizens behind; though a Zenimax Online representative warned us that we could be missing out on their individual quest lines in the future.

Some of Elder Scrolls Online's visual elements were strikingly similar to Skyrim. The compass — one of the few, ever-present elements in the game's limited, customizable user interface — looks exactly like the compass from Skyrim, complete with identical icons symbolizing towns, houses, caves and other areas. Some of these elements are indicative of an initiative to incorporate elements familiar to Skyrim's players, Konkle explained, but others were included simply because they get the job done.

"It's definitely safe to say that Skyrim coming out and being this wildly successful, as you say, had a big impact on our development, because up to that point, all there really was was Oblivion, and the further we got along, the more dated that product became," Konkle said. "Certainly, Skyrim changed and improved what an Elder Scrolls experience is.

"I think the compass is an interesting example; we did that less because that's what Skyrim did, and more because the focus on our game is immersive, minimalist UI. What we had before was a mini-map that just didn't achieve those goals. It got you from Point A to Point B, but it kept you looking at the UI, not the world. The compass, which has been in all the Elder Scrolls games, gives you much more, 'Okay, the thing I want is in that direction, let me look at the world and figure out how to get there."

"Certainly, Skyrim changed and improved what an Elder Scrolls experience is."

That goal, to keep players' eyes on the world and not the UI, is reinforced through a number of gameplay mechanics, too. Not only is each zone littered with the genre's traditional and ever-desirable treasure chests, they also hide "Skyshards," which can provide those who find them with skill points used to unlock and customize their powers.

There's a truly unprecedented amount of customization — for an MMORPG, at least — to be found. It's roughly similar to the core series, in that you level up certain skills individually to gain access to new abilities within those skills. There are a number of differences, though. You increase your character's level based on a standard experience point bar, instead of a skill upgrade requirement. Also, the abilities you unlock are mapped to a small hotbar, rather than assigned to one of your two hands.

There are a ton of skills to unlock, upgrade and customize, however, ranging from different equipment specializations, racial traits, guild-specific power sets and class powers. The game has an overall level cap, but no limit to the skills you can level up — the class you choose at the beginning doesn't restrict your choices in this regard. You may have started at the mage, but after equipping and leveling up your heavy armor skills, and going down the fighter's guild path, you could be a tank worthy of the most difficult dungeons. 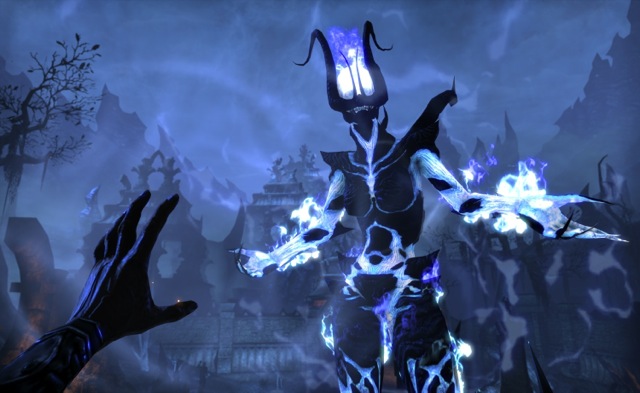 The system was designed to not tie players down to their earliest decisions about their character, Konkle said, something that few other MMOs have been able to achieve.

"If you focus entirely on the class roles and sticking with specific benefits for picking a class, and specific weaknesses, and there's no way to overcome those or change what your initial position was, then you inevitably get that sort of thing, like 'Oh, you tried to go off role? That's just ineffective,'" Konkle said. "We don't have that restriction, which I think allows for a lot more exploration and customization in your character, which is good for us."

"If you're working on an online game and you're not excited about interacting with the fan community, you're in the wrong development business."

He admitted that many of those who are playing the pre-release version of Elder Scrolls Online still adhere to those preset roles, like tanking and healing. However, the customization tools Zenimax Online has built rewards oddities and experimentation in equal measure.

"Every week, we make sure one of our dungeon test days is Random Build Day," Konkle said. "We'll just try something and see if that works. My favorite one we did recently was all sorcerers, all conjuration. Everyone had two pets and used heal staffs, and so it was just a group pet healing, and you're trying to let the pets do all the action. It was stupidly effective, and I had to nerf the pets as a result, I had to reduce their health. We do that every week. There was the, 'Let's all try stealth, DPS, Nightblade build.' It did not work. It was not effective. I think that's part of the fun.

"The good news is, because you don't lose progression, because progression is infinite, you're effectively just building cards for your library, and putting together a deck to try your character out. If it doesn't work, it takes five seconds to change it to a different deck."

Zenimax Online Studios is undergoing a bit of crunch to get Elder Scrolls Online ready for its spring 2014 launch window, but Konkle said that doesn't mean they'll stop taking the fans' concerns to heart. Reacting to feedback, he said, is his very favorite part of the online gaming genre.

"If you're working on an online game and you're not excited about interacting with the fan community, you're in the wrong development business," Konkle said.