Dishonored has been an unlikely success story for developer Arkane Studios and publisher Bethesda Softworks — not because its creators' talent was previously unproven, but because new IP and stealth-based games rarely make splashes this big.

The game has allowed Arkane to develop a handful of expansions for the title, and envision a future for the franchise beyond. It's rare for risks in the games industry to pay off so profoundly; a fact that designer Ricardo Bare does not take for granted.

"Man, beyond words — it's been amazing," Bare said. "It's more than we hoped for; I mean, we hoped we'd make a good game and the people who like the kind of games we like would enjoy it, and that we would make enough money to make more games like that, which is always the goal. I think it's exceeded our expectations — the reception of the fans, the critical reception, everything's been really great, so we're super happy."

"We had other ideas, like maybe you can play a Thug or an Overseer..."

The third major piece of downloadable content for the title, The Brigmore Witches, was facilitated by that success. It's the second half of an additional story arc to the game focusing on a relatively minor character, the skilled assassin Daud, taking place in a mix of familiar and new environments inside and outside the city limits of Dunwall. Picking Daud as the focal point for the game's story expansions (which includes April's The Knife of Dunwall) was the clearest choice for Arkane when it came to expanding the story, Bare explained.

"The reason we chose Daud was, that was the thing everyone was the most excited about," Bare said. "We had lots of ideas on the whiteboard, we heard things from our fans, from press who played early versions of Dishonored for reviews and said, 'Hey, you know what would be great? I want to know more about Daud, I want to play Daud,' and there were lots of fans saying the same thing.

"When we talked about it as a team, the team said the same thing, too," Bare added. "We had other ideas, like maybe you can play a Thug or an Overseer, but the thing that really stuck was Daud, because he had such an interesting backstory." 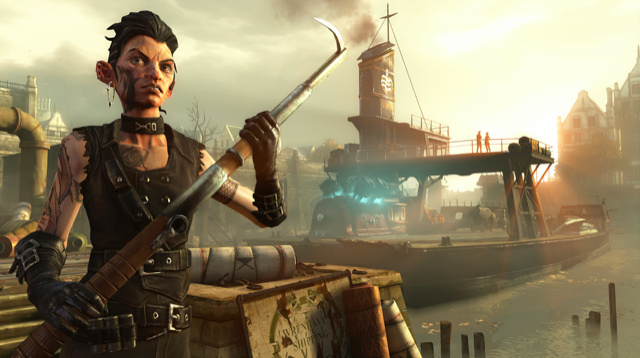 Daud had a number of other advantages that made Arkane's choice an easy one, the most obvious of which being his murderous vocation. Corvo, the hero of Dishonored, isn't so different from Daud on a mechanical level. He's got a blade, a penchant for stealthiness and a handful of tools and magical abilities courtesy of the game's mysterious patron of the dark arts, the Outsider. The pair's similarities made it easier for Arkane to iterate quickly — a requirement for DLC development — by making subtle changes to the gameplay; changes they could justify in the varying combat and traversal skills of Corvo and Daud.

The latter's toolset isn't exactly the same as it was in Knife of Dunwall. Daud's still got access to chokedust, arc mines and the other items introduced in the last DLC, but he comes equipped with a new power for The Brigmore Witches: a simple ability, aptly named "Pull," which lets you attract items (or at higher levels, humans) with a telekinetic grasp.

The implications are instantly sinister for anyone experienced with Dishonored — using Pull, you can yank a sentry through a deadly trap or use an unfortunate bystander as a human shield. Pacifists can also use it to retrieve faraway objectives without getting tangled in a brawl, or remotely remove the whale oil canister from a security device impeding Daud's progress.

Favors — another element introduced in Knife of Dunwall, which let your purchase perks before heading into each mission — have been fleshed out further in The Brigmore Witches. The DLC's first mission sees you sneaking back into the prison which the falsely-accused Corvo escaped from in Dishonored. Before starting, however, Daud can purchase an Overseer disguise, giving him an easy entry point into the prison and unlocking some otherwise inaccessible areas within. 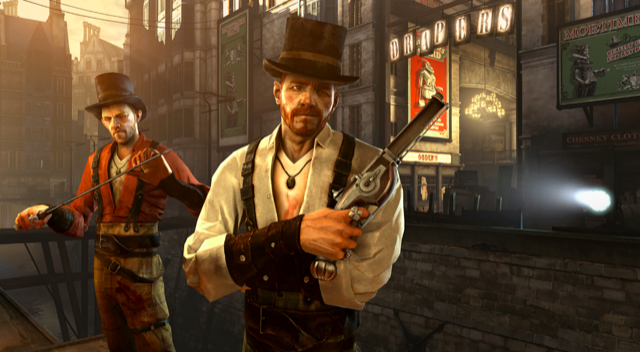 The Brigmore Witches serves two other purposes, fulfilling fans' wishes that Bare and the team at Arkane heard following The Knife of Dunwall's release. First, it will wrap up Daud's storyline decisively; that much is teased by a dream encounter with Corvo that kicks off the DLC. The second is that it will show players a bit more of the world Arkane created — including the first look players get at the world outside of Dunwall.

"We made a whole world that goes beyond Dunwall," Bare said. "There's a lot more that can be done with Dunwall, and the team's super excited about the world that we made. In fact, even in The Brigmore Witches, in one of the levels you get to go outside the city for the first time — Brigmore Manor is up the river on an island, so that was a new thing for us in this DLC."

Bare wouldn't comment on when we'd get a chance to explore more of that world in the form of a sequel. There's a lot to explore, that much is clear; the game's designers spent a tremendous amount of time crafting the lore of Dishonored's plague-riddled, whale-powered world. When asked if that lore could be detailed in a licensed product — a movie, web series or novel (Bare and fellow designer Harvey Smith both had books published in April) — Bare said he'd love for that to be a reality.

"Somebody else would have to do it, though, because if we were writing a novel about the Dishonored universe, then we wouldn't be working on games at Arkane," Bare said. "It takes a long time to write a book, you know?"