Nearly a year ago, SpyParty creator Chris Hecker unveiled a stylish visual overhaul for his long-in-development competitive spy-versus-sniper game. The flat characters of SpyParty, currently in an extended open beta, were finally getting a dash of actual character.

Today, Hecker unveils the extreme makeover of SpyParty's environments, the maps on which spies will mingle and snipers will hunt. The result of a year's worth of work is stunning; the illustrative style of SpyParty's secret operatives and partygoers is now reflected in its environments, a visual leap forward from the graphically simple maps of today.

As with SpyParty's visually overhauled characters, the game's revamped maps are the work of artist and animator John Cimino, who worked with Hecker on Spore. The two environments Hecker's showing off today represent two ends of spectrum of timelessness he's aiming for with SpyParty.

"In some sense, more than the characters, the architecture dates the thing," Hecker said in an interview with Polygon. "So if I want the timeless vibe I wanted to make sure I staked out both ends to show that the illustrative style [fits] with the modern and the traditional."

Having established that timeless aesthetic, Hecker said, might allow him and Cimino to stretch things a bit further. The game's updated architecture shown so far draws its influence from San Francisco's Flood Mansion and the mid-century modern homes of Los Angeles, and Hecker says, "Now I feel like we can do the modern spacehouse and the castle in the forest if we want to. It feels pretty solid, like the art style will hold up."

SpyParty's revamped environments didn't require the same amount of exhaustive visual research Hecker and Cimino undertook for the game's character redesign, he said. They'd settled on an illustrative look long ago, a choice that shaped the style of the game's maps.

The new maps sport a warm/cool aesthetic — the map's interior party spaces are flooded with a soft orange glow, while exteriors are minimally lit by the dusk — that Hecker says came about as a result of experimentation and a push away from games that are "art directed toward the brown." The warm and cool sections of each map help establish boundaries, showing where the spy and sniper can travel. The look also serves SpyParty's fiction. 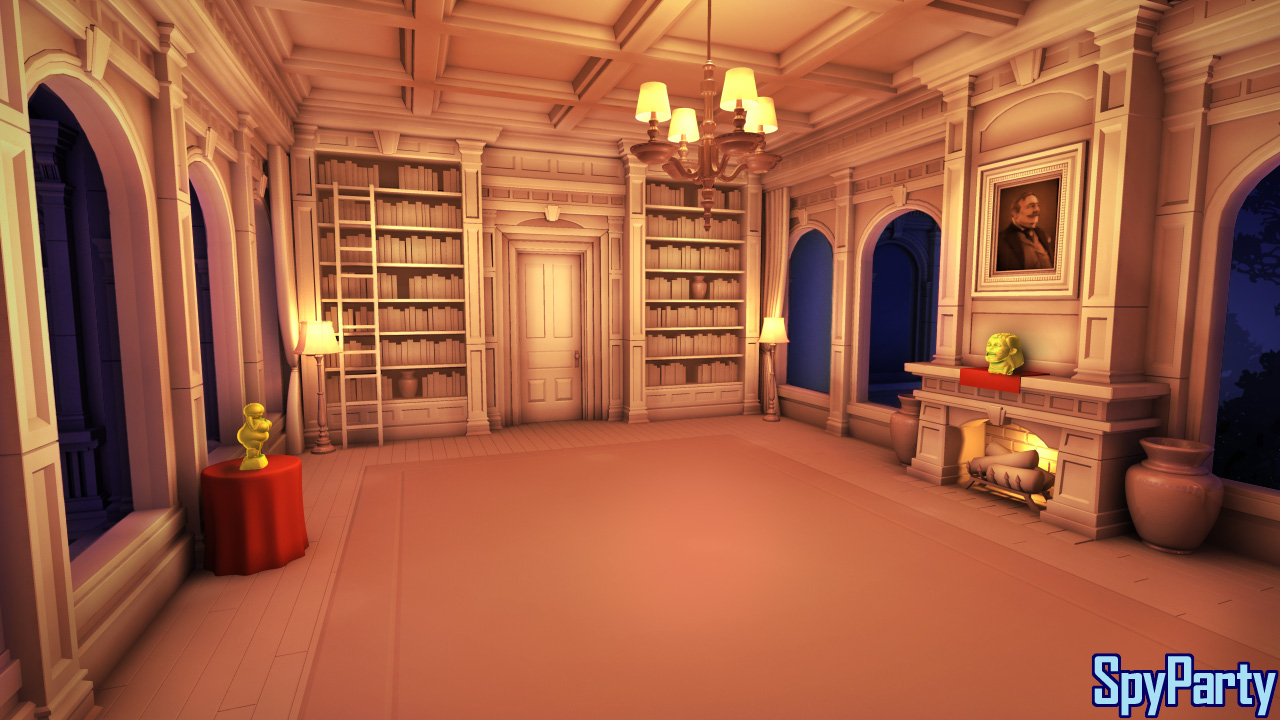 "The warm/cool thing emotionally underscores the idea that the spy is left out in the cold," Hecker said. "There's been some fan faction in the forums about how the sniper is just mad that he's not invited to the party. I want to push that emotional gap even more."

The game's environments feature little in the way of textures. There's some grain added to surfaces to give the space some "tooth," Hecker said, but the flat-shaded look of SpyParty's ballrooms and lounges serve to "keep the background in the background."

SpyParty's visual upgrade, its new characters and at least one of the new stylized maps, will be playable at PAX Prime later this month. The first publicly playable look at the game's graphical overhaul may differ somewhat from the hyper-detailed Maya renders of the game's partygoers and maps, and the resulting art change may impact the way the game currently plays.

"The visual density being so much higher than the old stuff is going to totally throw the game off," Hecker said. "It's going to be a while before the new art can replace the old art."