Developer Platinum Games detailed The Wonderful 101's free-flowing chain-combo combat system in today's Nintendo Direct, and Polygon got a chance to see this in action during a recent hands-on session with the game's single-player mode.

In today's Nintendo Direct, hosted by Platinum Games' Hideki Kamiya, the developer went through the various team attacks players will be able to employ during battles. Using either the analog stick or drawing directly onto the GamePad, players can select their group of heroes to create Unite Morphs, which are the main kind of attacks that will be used throughout the game. The Unite Morphs can be purchased from The Wonderful Mart – a kind of store for superheroes where players can spend the money they make from playing the game to buy new tools.

The former allows players to gather their heroes and shape-shift into a slinky that dodges attacks.

Drawing a circle on the GamePad makes the heroes group together to form a giant fist, which is good for bashing down doors and pounding unarmored enemies. Drawing a straight line forms a sword, which is useful for cutting up chains and slashing through enemies that are within close proximity. Drawing a right angle creates a gun, which is suitable for targeted, ranged attacks. A squiggly line creates a whip, which also has the ability to pull armor off enemies, weakening them before players switch to other weapons. The newest Unite Morph that was revealed today is the hammer, which players can summon by drawing a line with a circle attached. The hammer is incredibly powerful and deals a heavy blow, but it has the downside of being slow and having a longer recovery time.

Players also have the ability to use Unite Spring and Unite Guts. The former allows players to gather their heroes and shape-shift into a slinky that dodges attacks. Unite Guts turns the heroes into a jelly-like blob that deflects attacks from the enemy. 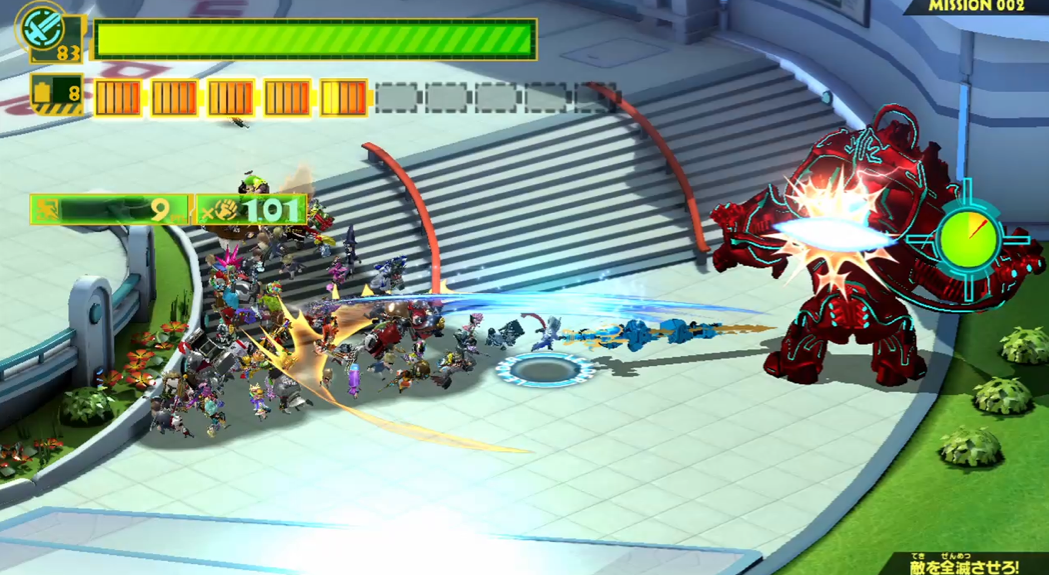 During our hands-on time with the game, we played through Operation 003, a single-player level where we had access to the above-mentioned Unite Morphs and a horde of diverse enemies to fight. The screen was busy with aliens and 54 of our tiny heroes running around like a disorganized swarm of bees. Triggering Unite Morphs was a frantic experience that required us to select all our heroes and draw the appropriate symbol before the enemy launched an attack. If the enemy attacked us before we were able to form a Unite Morph, our heroes would scatter around the screen.

The Unite Morphs took a bit of getting used to, but once we got a hang of running around the level to gather our heroes and figuring out the best time to perform a team attack, the Unite Morphs became a re-imagining of the free-flowing chain-combos that Platinum Games' is best known for. We learned when enemies were about to launch an attack by paying attention to audio and visual cues. We were able to dodge these attacks using Unite Spring, switch into the whip to pull off the enemy's armor, switch into Unite Guts to deflect an attack, switch back into a whip to pull off more armor, then transform into a fist to smash the now-unarmored enemy.

Every weapon we used had a strength and weakness, and as we played against different types of enemies, we quickly learned how to best approach them.